The Ecuadorian parliament last week approved government proposals to implement labour law reforms to address the economic impacts of the Covid 19 pandemic in one of Latin America’s worst hit countries.

The reforms provide for a reduction of up to 50% of working hours and with it a cut of up to 45% of the worker’s salary and empowers employers to unilaterally determine the worker’s vacation period. The government claims the measures are necessary to save jobs and avoid further layoffs in the midst of the pandemic.

Ecuadorian trade unions, under their umbrella organisation, the Central Unitaria de Trabajadores del Ecuador (CUT), are protesting the reforms, which they believe are unconstitutional and they claim will harm thousands of workers. Following protests on Monday 18 May, CUT are mobilising for further protests this coming Monday 25 May, in the statement below: Banana Link spoke to the national banana plantation workers’ federation Sinutrabe to find out what these reforms might mean for workers in the world’s biggest exporting country, which make up around 10% of the country’s overall export income.

Sinutrabe explained that the Ecuadorian government had first tried to implement these reforms last October, to meet demands on the country by the International Monetary Fund (IMF), including greater flexibility in its labour market. However, the government did not proceed with them due to large scale protests at the time, from indigenous peoples’ organisations and parts of the labour movement. Lenin Moreno’s government has taken advantage of the pandemic to introduce them now.

At the time of writing, no measures have been introduced by employers in the banana sector as a consequence of the reforms. However, because of high staff turnover in the industry, which means employers are continuously recruiting, it means employers will have the opportunity to recruit new staff on shorter hours, less pay and without rights to overtime pay and other benefits.

Another consequence of the pandemic is that in many sectors of the Ecuadorian economy workers have been laid off due to companies reducing production. We understand that in the banana sector, some companies have reduced production by up to 20%, with the consequent dismissal of some workers, while other workers who aren’t fully occupied are sent home without pay for their contracted hours they do not work.

The Independent Trade Union Federation of Workers of Ecuador (Fesitrae) is concerned that in some cases employers are using the legal concept of “force majeure” to dismiss workers, and be free from any contractual obligation to pay laid-off workers compensation in circumstances of an extraordinary event or circumstance beyond their control, such as a war or epidemic, or an event described by the legal term “act of God”.

In the wake of the pandemic, Sinutrabe has published a manifesto which calls for:

The full Sinutrabe manifesto, in Spanish, below: 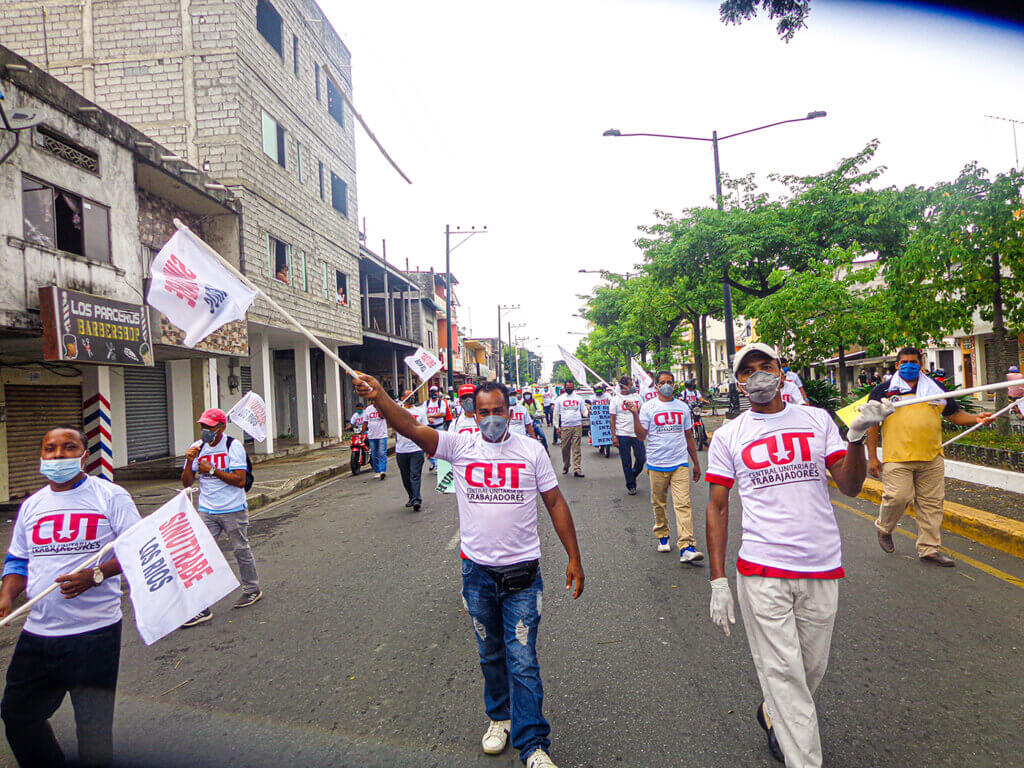