Our trade union partners in Latin America and Africa are extremely grateful for your continued solidarity and the generous donations received from union branches and regions in recent years. These funds have provided vital support for their activities. Some of the most significant gains made possible thanks to your donations are detailed below.

Our focus includes supporting the strategic work of regional networks, such as the Coordinating Body of Latin American Banana and Agro-industrial Unions (COLSIBA) and the International Union of Foodworkers‘ (IUF) Network of African Banana Workers Unions, as well as supporting unions to organise across agricultural sectors at national level.

Many plantation workers continue to live in poverty and their most basic rights fail to be respected in the workplace. We are appealing for donations to allow us to continue to offer solidarity to our partner unions to challenge the repression of the freedom to organise, to educate workers about their rights, and empower their union representatives to bargain collectively for Decent Work for the men and women that grow the fruit sold in our supermarkets. 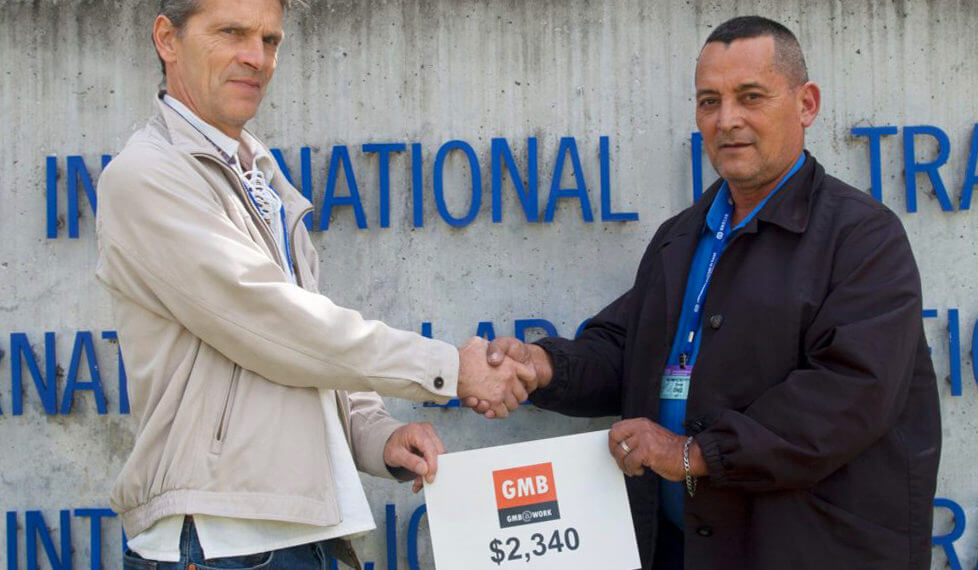 You Can Make a One-Off Donation Here:

Union-To-Union Solidarity in Action
Achievements in 2018/19

SITRAP (Union of Agricultural Plantation Workers), which represents tropical fruit workers in Costa Rica, has this year signed two historic Collective Bargaining Agreements (CBA) on two  Del Monte plantations. These are the first new CBAs signed in Costa Rica between an independent trade union and a multinational fruit producer for decades in the notoriously anti-union environment that exists in the Central American country.
The CBAs include a series of important clauses giving worker representatives on plantations the time and facilities to meet freely and present grievances and ideas to management through regular dialogue, and SITRAP is optimistic that these CBAs bode well for organised workers being able to negotiate similar agreements at other plantations.
Funds raised by Banana LInk and UNISON supported the attendance of over 200 delegates to SITRAP’s Annual Assembly this year, which celebrated these historic successes, and the success of their recent recruitment campaign, which had seen nearly 500 new members in a twelve-month period.

We successfully argued that Fyffes had breached the Base Code of the UK’s Ethical Trading Initiative (ETI), an alliance of companies, trade unions and NGOs that promotes respect for workers’ rights around the globe.

Global fruit trader and producer, Fyffes, had their membership of the Ethical Trading Initiative terminated in March because of their failure to adequately address rights violations at their subsidiaries in Honduras, following a Banana Link and IUF complaint. We continue to campaign for Freedom & Fairness for Fyffes Workers.

With solidarity from the GMB, our Peruvian partners, SITAG, secured the reinstatement of five union executive members unfairly dismissed from their jobs, and they continue to advocate for reform of the labour law, which exempts agricultural business from some worker protections.

Workers at Dole’s Megabanana plantation division in Babahoyo, Los Ríos, Ecuador will see better benefits and rights than other plantation workers in the country, thanks to a new collective contract just signed between the company and the Comité de Empresa de Los Trabajadores de La Compañía Megabanana S.A, the trade union work council and bargaining agent under Ecuadorian labour law.
The two-year agreement, reached with the participation of the Minister of Labour, will see improvements to wages (above the country’s minimum wage), working hours, overtime payments and holidays.

Progress in Guatemala in face of repression

In Guatemala, with funding from TUC Aid, SITRABI has trained fifty workers in the South, to be able to form a new union where trade union repression is violent and entrenched. SITRABI is also negotiating a framework agreement on worker’s rights and sustainability with AgroAmerica, one of the largest regional producers, which would be only the second such agreement in the banana sector.

In Costa Rica, SITRAP was able to hold a women members workshop to coincide with International Women’s Day to discuss issues of health and safety facing women in the workplace, while in Ecuador, the newly registered SINUTRABE union, was able to hold its first workshop for women representatives, in a country where women represent only 5% of this workforce because they are viewed as ‘high cost, high risk’ employees.

The GMB has pledged its support to the thousands of banana workers in Cameroon whose livelihoods are threatened by political unrest in the country, which has resulted in the majority of banana plantations being closed down, while banana workers themselves have been attacked by militant Anglophone separatists.
An Emergency Motion passed by delegates to the GMB Congress in Brighton this year agreed to set up a fund to support the plantation workers’ union, the Fako Agricultural Workers Union (FAWU), which is on the verge of collapse.

Health & safety training for thousands of workers in Ghana

A Banana Link coordinated Banana Occupational Health and Safety Initiative (BOHESI) training manual, including specific guidance on gender in occupational health and safety, is to form the basis of a training programme, delivered in partnership with the national industry body, which will reach over 4000 plantation workers in Ghana.

Banana Link is working in partnership with the IUF Africa and Ghanaian Fairtrade producer Golden Exotics Limited (GEL) to improve working conditions for women on their 100% unionised plantation in the Eastern Region of Ghana. The project is also seeking to attract more women from the local community to work on GEL’s expanding organic banana farm.
The work has included leadership and supervisor training for women, expanding women’s  employment in ‘non-traditional’ roles, reviewing tasks open to pregnant and breastfeeding women and raising awareness about sexual harassment polices in the workplace.

More On Our Work With Trade Unions ...