Home » Where We Work » Guatemala 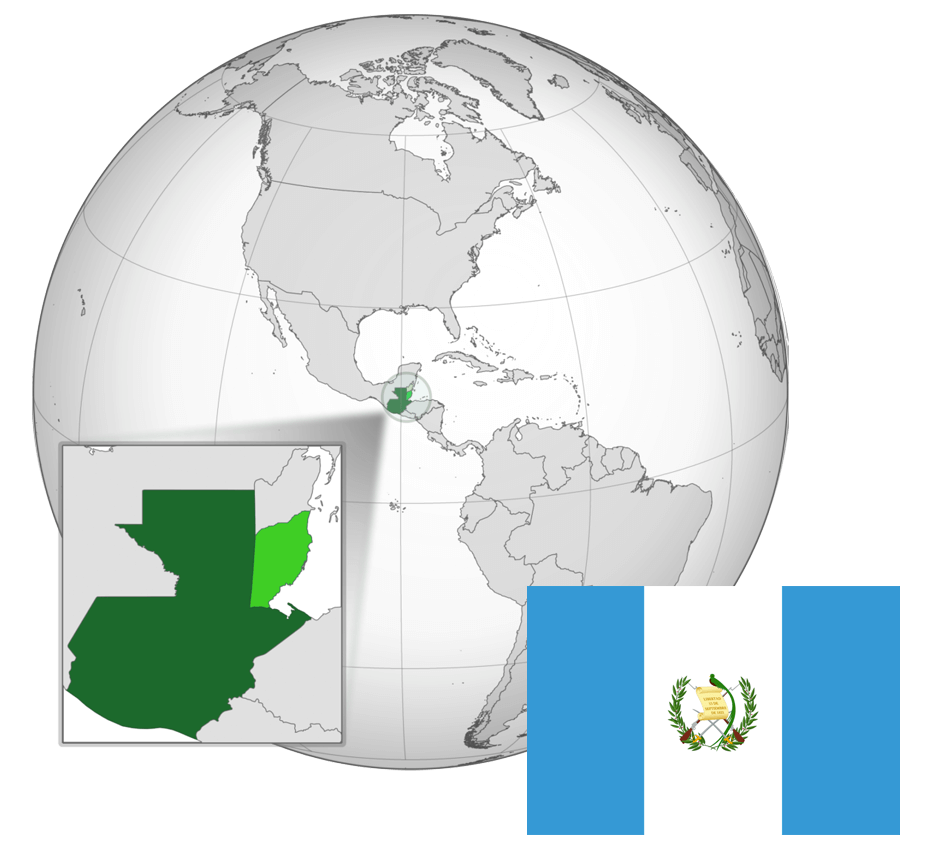 Agriculture provides the backbone of Guatemala’s economy, contributing 25 per cent of GDP, employing over half the labour force and providing two thirds of exports, mostly coffee, sugar, bananas and beef.

Currently, 80% of the banana production and a quarter of its exports are carried out by Guatemalan national companies. From the late 1990s, the banana industry underwent a major expansion in the Southern Pacific coastal plain, enabling the country to overtake Colombia and Costa Rica and establish itself as the world’s third largest exporter.  Izabal, in the North of the country on the Caribbean coast now produces only 20% of total banana exports. There are at least 30,000 direct jobs in the industry.

Guatemala currently provides around 40% of all bananas etering the North American market.

SITRABI, the Izabal Banana Workers’ Union, is the oldest private sector union in Guatemala and represents over 3000 workers in Del Monte and their supplier farms on the Caribbean coast. Every three years the union negotiates wages and social benefits with Del Monte subsidiary Bandegua. SITRABI has good relations with other local unions in other multinational and national plantations. 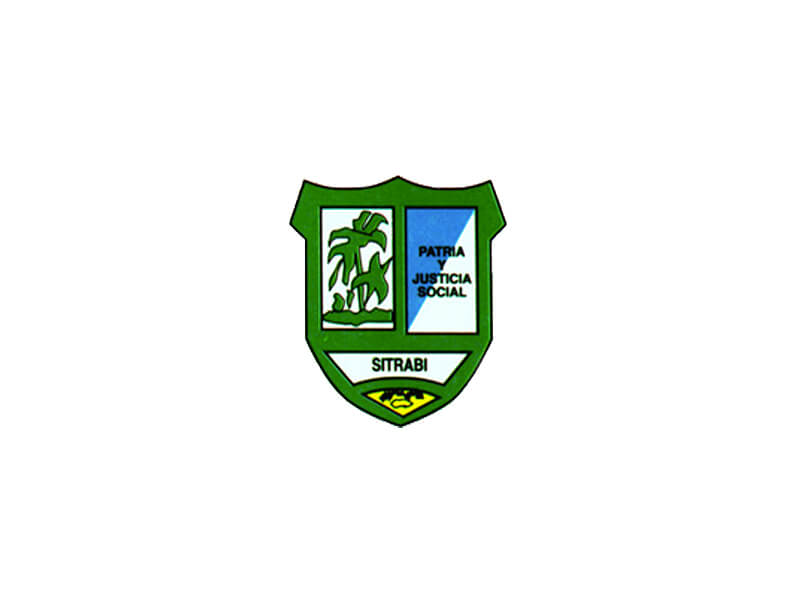 Our work in Guatemala

Guatemala has been described as the most dangerous country in the world for trade unionists by the International Trade Union Confederation. Since 2007, a total of 68 trade union leaders and representatives have been murdered, and a high number of attempted murders, kidnappings, break-ins, and death threats have been reported, along with torture.

The real challenge is that banana workers’ relatively decent wages and conditions in the North are being undercut by a huge expansion of cheap, non-union bananas in the South. With the British TUC Aid and Banana Link, SITRABI has been able to start the awareness-raising process with workers in the South and establish dialogue with one of the main companies operating there.

Noé Ramirez Portela, General Secretary of  SITRABI until 2019, talks in the video on the right about the challenges and dangers of organising in Guatemala below.

In early November 2020, Hurricane Eta tore through central America damaging plantations in Northern Honduras and Eastern Guatemala. Farms and infrastructure including workers’ homes and roads that connect them to nearby towns were severely damaged by the floods and wind. The state and multinational corporations provided no help to the workers leaving them stranded in camps and community buildings. Whilst it is still uncertain whether these farms will survive and locals will be able to return to work, donations from Banana Link and our partners have provided food packages for those still left stranded. 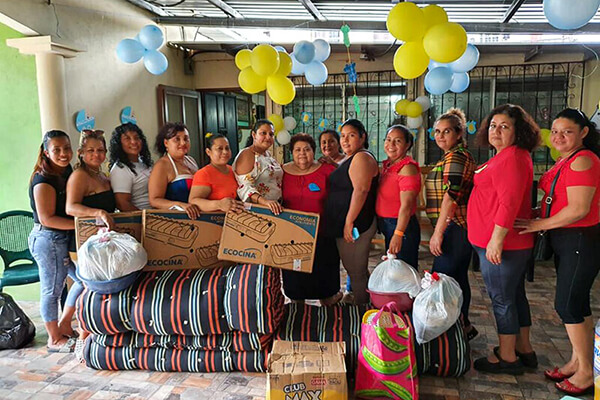 The majority of banana plantation and packhouse workers in the Izabal province of North East Guatemala are members of SITRABI, COSISBA or smaller affiliated sister unions. These 5500 or so workers enjoy collective bargaining with their employers: Fresh Del Monte Produce subsidiary Bandegua, Chiquita subsidiary Cobigua, and Guatemalan-owned fruit companies under contract to Del Monte.

Those working for Del Monte in particular enjoy relatively decent wages, terms and conditions after 40 years of gradual improvements achieved through the negotiation of 3 year-long CBAs. Although workers in the other companies earn well above the minimum wage, they have not been able to secure the same level of benefits as their colleagues employed by the other companies. Nearly 1000 workers in the Izabal banana industry are still unorganised.

The Urgency of Reversing the Race to The Bottom

The unionised workers of the ‘North’ face, however, the very real risk of losing their jobs and livelihoods in the short- to medium-term, in a region with no other major employers.

The costs of producing a box of bananas in Izabal is around $1.50 more than the the same box in the large extensions of recently planted export bananas in the provinces along the Pacific coastal plain in the South. Attempts to organise trade unions in this region have been violently repressed, including the murder of a union leader in 2008.

Guatemala now exports nearly four times as much from the completely unorganised plantations of the South as it does from Izabal.

The rapid expansion has taken place on highly productive volcanic soils, using a very badly paid and exploited workforce and in a part of the country where government services are often absent and organised crime operates with total impunity.

The critical challenge for SITRABI and the sister unions is to ensure that the 25,000 or so workers in the Pacific South workers have access to education and training that enables them to organise without fear.

This can only happen if there is serious and concerted international trade union solidarity, as is being shown by TUC Aid and the US-based Solidarity Center of the AFL-CIO.

The Achievements of The Project Have Been:

A September 2020 report – What Difference Does a Union Make?: Banana Plantations in the North and South of Guatemala – published by the Center for Global Workers Rights at Penn State University in the United States, illustrates the stark difference in pay and working conditions for unionised and non-unionised workers in the Guatemalan banana industry.

Guatemala is currently the third largest exporting country of bananas in the world, and by far the largest exporter of bananas to North America, with two exporting areas: one on the southern Pacific coast, which is non-unionised and represents 85 percent of employment in the sector, and the other in the north where nearly all workers employed in banana plantations are unionised. Northern Guatemala is also home to one of the stronger unions in region, Sitrabi, which represents Del Monte workers, whilst other unions represent Chiquita workers in the same Caribbean coastal area.

The report, based upon a survey of over 200 workers (34% women), as well as extensive interviews, an examination of trade data, and a review of relevant prior research, found: 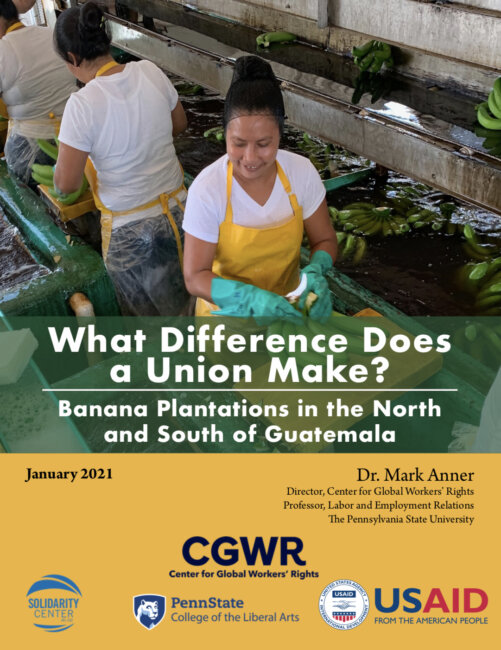 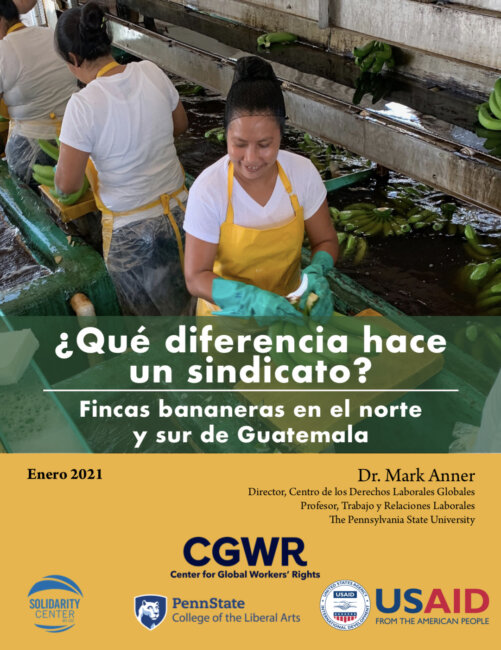 Listen to our podcast with the author of the report, Dr Mark Anner

Banana Link · Podcast: What difference does a trade union make?

Noe Ramirez, recently retired Secretary General of SITRABI, our partner organisation which represents plantation workers in Guatemala, spoke recently to Latin American Region of the International Union of Foodworkers. We reproduce the interview below.


You started working on bananas at age 20, but you were born very far from Izabal?

Yes, in the department of Chiquimula. When I was six months old, my father, who was president of an agrarian table under the presidency of Jacobo Arbenz , had to flee to avoid being killed and went to the banana zone.

I grew up there, I went to school and when I was 20 years old I started working in Bandegua, which was already a subsidiary of Del Monte .

Did your father’s story influence your union leadership?

Definitely. My father fought for the people, for the land, against capitalist power, and that is in his blood.

You joined the ranks of the union shortly after working on the farms?

I no longer wanted to continue even though my colleagues asked me to. I had to become an office manager, behind a desk, looking only at papers, losing relationship with people at their workplace. That goes against my nature.

I think that trade unionists should go to the fields, to the work centres, to the crews, to the packing plants. This is what I try to instil in the new layers of leaders, and luckily they are doing it. You have to be suspicious of leaders who do not leave the comfort of their office.

In all these years have there been changes for good in the banana sector?

We achieved very important things, such as completely turning around the collective agreement that governed until 2000 and that was very harmful to the interests of the workers.

We managed to improve working conditions, that overtime was recognised and we achieved significant salary increases.

They came from a very hard period?

Yes, in 1999 there were two major strikes, one 39 days and the other 28, and many colleagues from the union leadership had to go into exile.

In 2007 they murdered your brother, Marco Tulio Ramírez, who was secretary of Culture and Sports of Sitrabi?

They shot him to death in the door of his house. They also persecuted me and it was thanks to union organisations, including the IUF, that I am alive. They got me a police guard thanks to those pressures.

A pure fight and always negotiating?

It was won with the fight and the participation of many people.

The entrepreneurs knew that I did not hesitate to report them internationally, and that hurt them. Once in London, I announced that 600 sick workers, some of them with cancer, were about to be fired. Well, given the pressure and international solidarity, they didn’t fire any of them.

What did the IUF represent throughout your union career?

When in 2000 we were alone negotiating a collective agreement and the company wanted to crush us, the IUF management clearly told Bandegua that if they did not immediately resume negotiations with Sitrabi they would lose their markets and in the end we achieved one of the best collective agreements of our history.

When my brother was assassinated, the IUF Regional did the same to protect my life. You traveled to Guatemala several times and mounted an international campaign.

The IUF has ultimately been central to my union experience.

Taking Action to End the Violence and Impunity in Guatemala

Violence against banana union leaders in Guatemala escalated following the murder of SITRABI union leader, Marco Tulio Ramirez, in September 2007. In the following five years, a total of 68 unionists have been murdered and none of the perpetrators of these crimes have been brought to justice.

In 2014, more than 6000 people responded to a request from Banana Link, the TUC and the International Labor Rights Forum urged people to send emails to the new Attorney General to ensure that the process of investigation into the crimes against trade unionists was not dropped. Following this campaign action SITRABI met with the UN Commission Against Impunity in Guatemala (CICIG) who agreed a dialogue process starting with 10 of the 68 cases of unionists murdered since 2007. However, to date, nobody has been brought to trial for these killings and successive governments have failed to deliver on promises. In this interview, Noè Ramírez of banana workers’ union SITRABI speaks about the violation of labour rights in Guatemala and the murder of trade union activists. Noè’s brother, Marco Tulio Ramírez, also a SITRABI union leader, was murdered in October 2007. He describes efforts to improve workers’ rights and condition at plantations on the south coast of Guatemala, where they are hoping to replicate SITRABI’s successes in Izabal.