Home » Where We Work » Cameroon 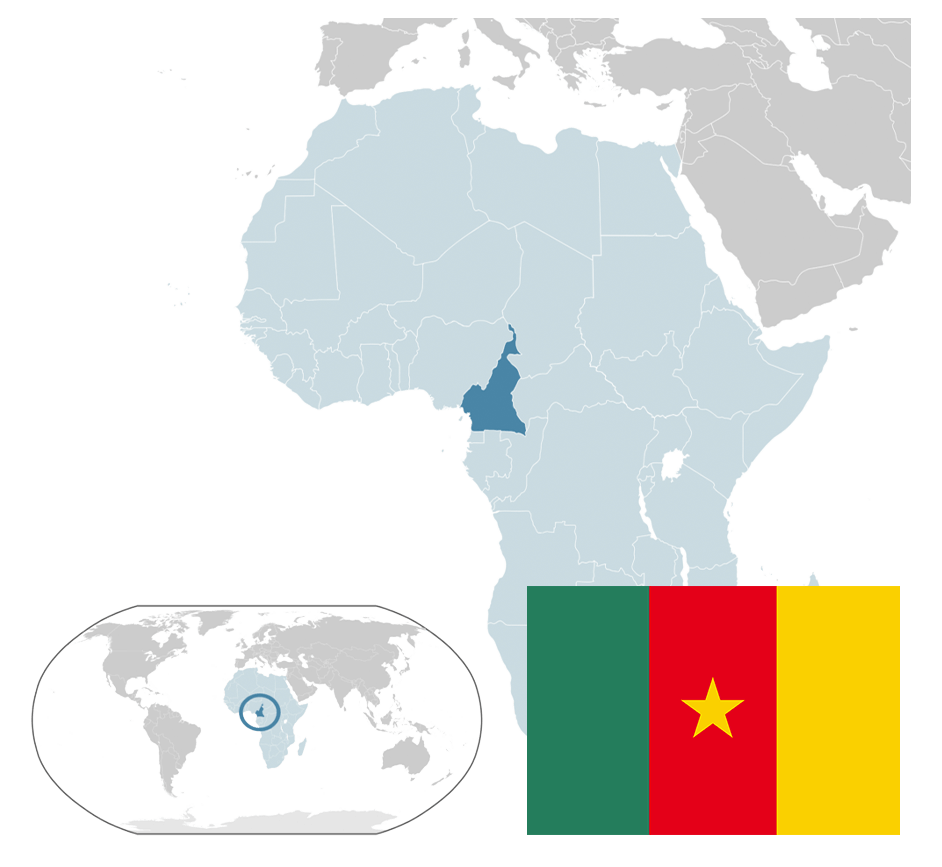 In 2015 Cameroon overtook Ivory Coast as the largest banana producer in the Afro-Caribbean-Pacific.

Banana production is one of the main employers in the agricultural sector with 46,000 jobs. 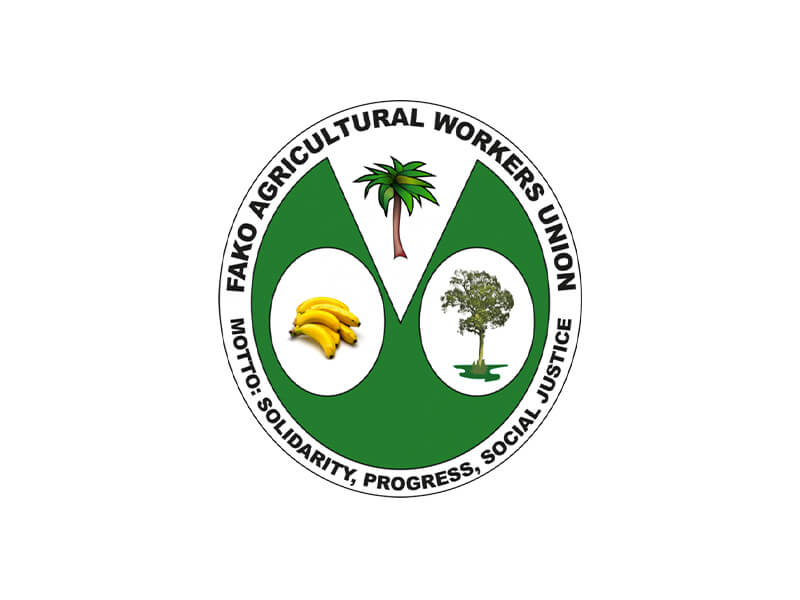 Our Work in Cameroon

Bananas constitute the fifth largest export earner for Cameroon, exporting to Europe, mainly to France and the UK. Workers on plantations in Cameroon suffer from poor wages that don’t meet their basic living costs, leaving them in poverty which leads many into spiralling debt, while working long hours in hazardous conditions, with poor protection from illness and injury.

To address these problems, Banana Link’s Securing Decent Work in tropical fruit export production project has delivered an education programme for trade union representatives and workers to help them understand their rights and negotiate better wages and working conditions.

In the video to the right, workers and union officials talk about how they have benefitted from this training programme. From 2013 to 2015, the proportion of workers able to cover their monthly expenditures increased from 23% to an estimated 40%, primarily due to the successful renegotiation of the National Collective Agreement on Agriculture, which increased the basic wages in the sector by 20%. FAWU has also ensured that workers receive financial management education to enable them to better handle their limited incomes, resulting in them borrowing money at lower interest rates.

Working hours remain high in Cameroon, with workers averaging 66 hours a week in peak season. However, FAWU estimate that 75% of workers at the main employer, CDC, now benefit from earlier finishing times of 6 or 7pm, which the company has committed to extending to all of its farms.

Educational workshops in Cameroon have been very effective in increasing workers’ awareness of their labour rights: in 2013, only 1 in 4 workers knew their rights, but by the end of the project, two-thirds of workers could name at least one of their rights at work. An additional 2500 banana workers joined FAWU during the project, many as a direct result of the education programme. Before the project began in Cameroon, only 35% of workers reported having adequate PPE. This number has now increased to 74%, but of this 74%, only 30.7% have received appropriate replacement PPE in the last twelve months. The priority over the coming years will be to ensure workers receive appropriate replacement PPE regularly. Significantly, 95% of workers now know that exposure to chemicals is dangerous and detrimental to their health, and 72% have spoken with a FAWU representative about health and safety in the last year.

Using findings from our 2015 research, that showed women would prefer an allowance for off-site childcare, FAWU is better able to engage in dialogue with management about appropriate provisions to meet workers’ needs. The International Union of Food workers (IUF), with the support of Banana Link, successfully facilitated the launch of the African Network of Women and Men Banana Workers in 2013 at Limbé in Cameroon.

The theme of building good industrial relations and improving working conditions was central to the meeting, with reports from union leaders and women’s committees on advances made in all three countries, particularly in building unitary trade union platforms where several unions operate within a single company.

The first ever participation of an African workers’ delegation at a global conference of the World Banana Forum was hailed as a historic step forward, with important interventions on a wide range of subjects from the delegates to the conference in late 2017 in Geneva. The Network decided to propose to host the fourth global conference on the African continent.

A multi-stakeholder round table saw representatives of two major banana companies from Côte d’Ivoire and of the Ministries of Labour and Agriculture contribute to the debate over how to continue building social dialogue and collective bargaining in the African industry.

The topic of the minimum agricultural wage in Côte d’Ivoire, which is barely one third of the level of the national minimum wage for all other sectors, provided a hot subject of debate. Participants agreed that this outdated dual-track remuneration system needs urgent attention, particularly in an industry which can afford to – and many cases does – pay well above the agricultural minimum.

However, wages in both the Ivorian and Cameroonian industries, especially for field workers in some companies, remain obstinately low, as testimonies from participants revealed. Housing allowances in Cameroon are far from covering the cost of renting decent accommodation, for example, whilst very low take-home wages in some companies in the fast-growing industry in Côte d’Ivoire have provoked industrial unrest in recent weeks. Calls for living wage benchmarks for the two countries were made, as a basis on which to build national strategies for implementation. In Ghana, where a living wage benchmark was set last year, trade unions will meet with Fairtrade and World Banana Forum representatives to discuss strategies for closing the gap between the lowest actual wage levels and the living wage level established for the banana industry in that country.

Reports from the women’s committee representatives revealed that, although the unions have developed their capacity in this area, there is still a deficit in some companies, where much more support is needed to make a difference on issues which have not been addressed adequately in the past.

The African banana industry has increased significantly in the last decade, with some African countries now in the top ten global banana exporters. However, this growth paired with the outdated and unjust agricultural legislation has created an industry in which workers do not have sufficient rights and conditions. Workers are suffering through unrealistic minimum wage, prohibitions of union activity and human rights violations in some cases.

Borders and language barriers have prevented the unification of trade unions across Africa and Cameroon, but platforms are now being created to encourage communication. Banana Link’s Policy & Communications Officer, Paul Lievens, takes a look at a recent report published jointly by Banana Link and the International Union of Foodworkers (IUF) examining the situation of banana workers in Africa and the necessity of a united voice.

Misery and frustration continues for banana workers in Cameroon

The political crisis in the Anglophone regions of North West and South West Cameroon is continuing to cause misery and frustration for banana workers at at Cameroon Development Corporation (CDC) plantations.

We have received a report this week, from Charles Mbide Kude, the General Secretary of the Fako Agricultural Workers Union (FAWU), that CDC has cut down its banana crops and is inviting workers to come and cultivate food crops for themselves on the plantations. Workers have not been paid for nine months. and FAWU is on the verge of collapse too.

France24 broadcast the report below from CDC, where workers talk about the attacks they have suffered, including having fingers cut off, and that the crisis means CDC has closed all but 7 of its 29 plantations, costing the company an estimated €53 million. A recent Human Rights Watch report from the region, claims that soldiers, special army units and gendarmes have used indiscriminate force and torched hundreds of homes and public buildings in the Northwest and Southwest regions between October and March, killing 170 people. Civilians have also been attacked by armed Anglophone separatists during the same period.

Meanwhile, the UN estimates more than 437,000 people are currently displaced in Cameroon, 246,000 of them in the Southwest Region, 105,000 in the Northwest Region, and 86,000 in the Littoral and West Regions, many now living in overcrowded conditions, without proper shelter or health and sanitation support, while over 35,000 Cameroonians have been forced to to seek asylum in Nigeria.

Most of the displaced are women and children, who face grave situations whether in Cameroon or Nigeria. Having fled with very little, they are arriving in impoverished host communities where food supplies are strained and with few facilities for health, education, water and sanitation. Refugees are currently being hosted in settlements, and more than 47 villages along the border, dependent on humanitarian assistance to meet their basic needs.