Bananas constitute the fifth largest export earner for Cameroon, while Ghana has only developed a commercial banana and pineapple industry in the past couple of decades. Both countries export to Europe, mainly to France and the UK.

Workers on plantations in both countries suffer from low wages that don’t meet their basic living costs, causing poverty and leading many into spiraling debt, while working long hours in hazardous conditions, with poor protection from illness and injury. 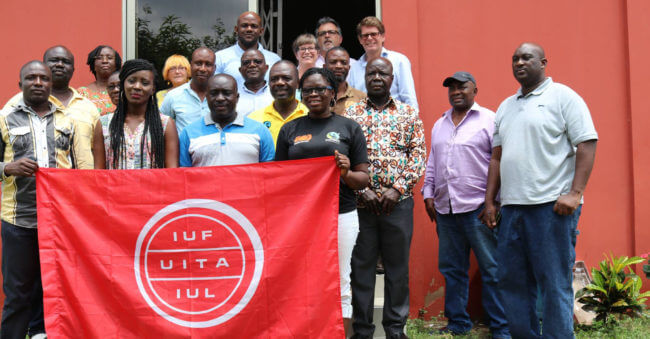 Following the initial project, Banana Link has continued to work with the International Union of Foodworkers in Africa to empower workers, including improving and increasing women’s employment and rolling out training on the Banana Occupational Health & Safety Initiative (BOHESI).

When you are at work you are not a slave, you have to complain when there are things that they are not right for you.

The Benefits Of The Training Programme

In the video below, workers and union officials talk about how they have benefitted from this training programme.

Now I am bold. I can talk to anybody. I can express myself anywhere just because I know my rights. I know because I’ve been trained so I know more. I will quote you from the Labour Code and from the Collective Agreement. Now I am bold.

In 2013 just over one third (35%) of workers in Ghana earnt enough to meet their basic household needs. But GAWU has been able to negotiate pay increases which have seen average monthly take-home increased from GHC 198 in 2013 to GHC 380 in 2015 – an increase of 92%. More than half of workers (54%) now report that their wages are sufficient to cover the costs of daily necessities such as food, housing, utilities and their children’s education, and identify that it is wage increases negotiated by GAWU that have increased this capacity to cover household costs.

Meanwhile, in Cameroon, over the three year period the proportion of workers able to cover their monthly expenditures has increased from 23% to an estimated 40%. This is primarily due to the successful renegotiation of the National Collective Agreement on Agriculture which increased the basic wages in the sector by 20%.

In both countries, the unions have delivered financial management education to enable workers to better handle their limited incomes, resulting in informed workers borrowing money at lower at lower interest rates.

Currently the majority of workers are able to meet their basic household needs and they appreciate that this is because of union negotiations with management.

Banana and pineapple workers in Ghana in 2013 worked on average 48 hours a week, despite a legal maximum of 40 hours. By 2015, this figure had dropped to a much healthier level of 37.5 hours a week, with most workers not now exceeding 8 hours a day.

Similar successes have been made in reducing the amount of unpaid overtime. In 2013, 89% of workers believed that overtime was compulsory and were unclear about whether additional preparatory work constituted employment. The majority of workers now receive payment for overtime.

FAWU has not been as successful in reducing employees working hours in Cameroon which remain high, with workers averaging 66 hours a week in peak season.

However FAWU estimate that 75% of workers at the main employer, CDC, now benefit from earlier finishing times of 6 or 7pm which the company has committed to extending to all of its farms.

As a result of education project in Ghana 66% of workers are now aware of at least one of their labour rights, as opposed to 28% at project start. Nearly 80% of workers attended a GAWU meeting or workshop in Year 3 of the project. GAWU’s goal now is to ensure that 100% of workers know their rights.

The educational workshops in Cameroon have also been very effective in increasing workers’ awareness of their labour rights. In 2013 the union estimated that only 1 in 4 workers knew their rights but by the project end two thirds of workers interviewed could name at least one of their rights at work. During the project an additional 2,500 banana workers joined FAWU, many as a direct result of the education programme.

More than 10,000 workers participated in education during the project from informal sessions run by their peers in the field or packhouse – or in the trucks on the way to work – to workshops to better understand the company rules, labour laws and collective agreements relevant to their daily lives on the plantation. 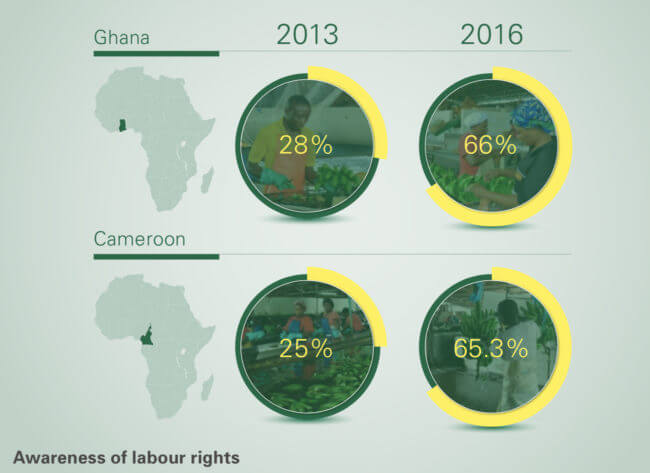 I never knew my rights as a staff rep but I was educated and from there I knew how to receive problems from workers and how to resolve them. At my farm I talk to workers at muster twice a week to keep them aware.

The provision of appropriate equipment is essential in order to protect workers from hazards. Poor quality or incorrectly sized PPE can lead to trips and falls, chemical burns, cuts, and skin conditions.

Great progress has been made Ghana in ensuring PPE is now provided with 97% of workers reporting receiving PPE across the 4 plantations surveyed. Improvement can also be seen in the number of workers who have to use their own resources to purchase and repair PPE which dropped over the period from 40% to 25%. Despite these achievements, 60.5% of workers still report that the PPE they receive is insufficient.

Before the project began in Cameroon, provision of appropriate PPE was low, with only 35% of workers reporting receipt of adequate PPE, which has now increased to 74%.  The priority over the coming years will be to ensure that workers receive appropriate replacement PPE regularly.

Of the 74% receiving PPE, only 30.7% received appropriate replacement PPE in the last twelve months. It is significant that now 95% of workers know that exposure to chemicals is dangerous and detrimental to their health and 72% have spoken with a FAWU representative about health and safety in the last year.

As a result of the Banana Link project, almost all workers have now been able to receive protective clothings, PPE, when using chemicals.

GAWU, as a result of the project, has been able to educate and to train workers to prevent, to have a more preventative approach to safety and health, and they are safer as workers.

Absenteeism caused by ill-health and injury is a common problem for banana workers, who are rarely compensated for missing work. Since 2013, however, commonly reported health problems have declined by a third thanks to increased union activity with both employers and workers. In Ghana, GAWU frequently raise awareness of health and safety issues with workers; the vast majority have attended a talk on this issue in the last year and 55% have discussed health and safety with a GAWU representative.

In Cameroon in 2012, nearly half of workers (48%) had experienced skin problems, such as rashes, mostly due to chemical exposure, while just under a third (32%) had had an eye infection in the past 12 months, from environmental hazards such as falling tree sap or from chemicals.

In 2015 these figures had dropped to 27% and 12% respectively. However, by contrast, the numbers of workers reporting incidences of nail fungi – particularly those working in the pack house spending hours with their hands in water polluted by chemicals – has risen from 14% to 33%, showing more work needs to be done.

FAWU believe that the overall decrease in common ailments, such as body pain and daily stress, can be attributed to improved health and safety practices and PPE provision in the workplace, earlier finishing times and better wages.

Workers now know how to deal with your health especially at work. If you are applying fertiliser when you are done with it you need to wash your hands before you eat something and you have to know that you need to change your clothes when you get home. When you take off your clothes you need to keep them in a safe place, you don’t let your children take your PPE and play around with it.

Despite banana workers need for childcare, it is not yet provided at any of the plantations in Cameroon or Ghana. In 2013 in Ghana, 42% of women had to take time off from work due to a lack of childcare.

Although this is an area which still requires attention, the 2015 research shows a majority would prefer an allowance to pay for off-site childcare, rather than provision of on-site childcare, which could expose children to harmful agrochemicals and other hazards, especially in Cameroon.

With this information, FAWU and GAWU is better able to engage in dialogue with management about appropriate childcare provision to meet workers’ needs.

Before I became a staff rep, frankly I did not know how to address a crowd or engage in dialogue. Through the training I can now dialogue at any level. I can speak with management to solve worker’s problems.

Sustaining the ‘Journey of Change’

At the end of the three year programme, hundreds of union representatives have been trained in both countries. Employers and the union report significantly enhanced social dialogue.

External evaluation has mapped and celebrated the ‘Journey of Change’ that representatives have undergone; women in particular feel more confident to speak with both management and members and are now equipped with the skills and knowledge to successfully handle grievances in the workplace.

Both unions have been trained to deliver future courses to representatives and empower them to raise awareness amongst workers of their rights and how to secure these through their unions.

Banana Link is working to continue to support GAWU and FAWU to educate and empower workers and their representatives to deliver tangible benefits in the working and living conditions of the tens of thousands who depend upon the banana and pineapple export industries in Ghana and Cameroon.

The project worked towards two outcomes: 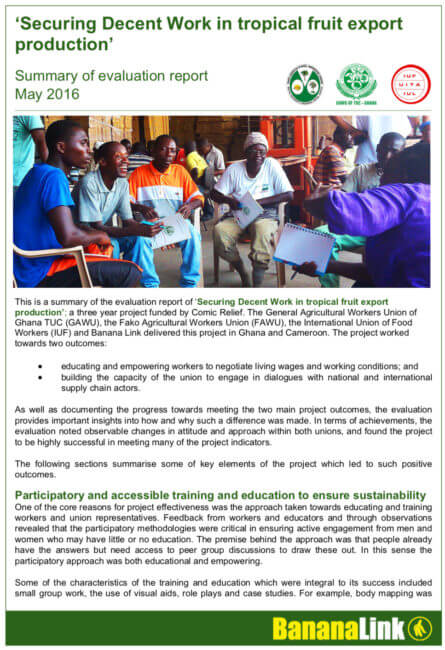 “This handbook has been written to help develop membership awareness and basic leadership skills. It is aimed at Staff Representatives who wish to find out about how their Union works and how they can play an active part in order to strengthen their Union and in the final analysis how Union leadership is developed from grass roots in order to realise self awareness.

We hope that this handbook will be a useful tool for Staff Representatives in solving workers problems and also broaden their horizon in the execution of their challenging task”. – Charles Mbide Kude General Secretary FAWU 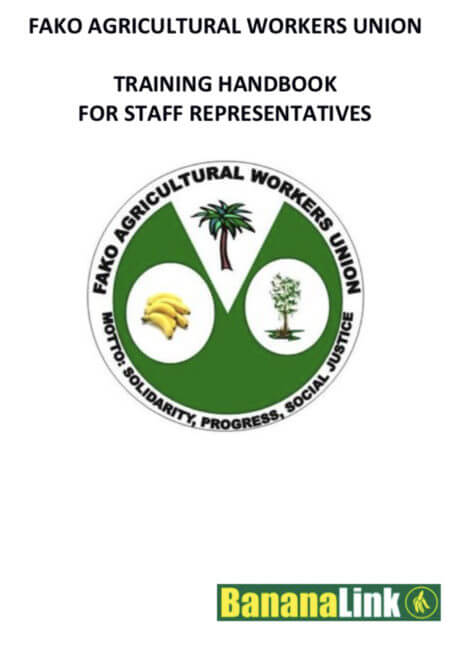 More of our projects