Home » Where We Work » Ghana 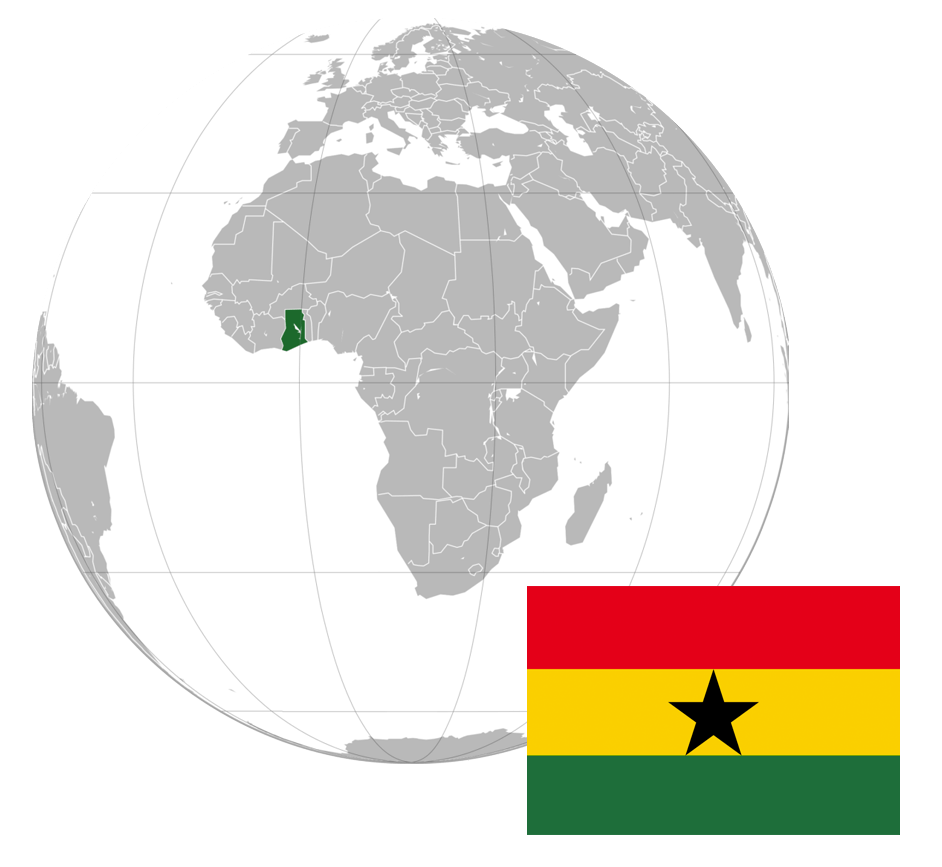 GEL (owned by Compagnie Fruitière) is a Fairtrade banana and pineapple producer with two plantations covering over 8,600 hectares. One plantation is devoted to pineapples and harvests 10,000 tons per year while the other concentrates on banana production with an annual production of about 50,000 tons, from 2,000 ha, employing 2,400 staff.

There are four banana-growing sections to Volta River Estates that cover 250 hectares and employs 441 people. In 2012 it produced 4,400 tonnes of bananas, 67% of which were certified organic.

Gold Coast Fruits is a 500 hectare Fairtrade pineapple producer supplying The Co-op and Sainsbury’s in the UK, along with a number of retailers across Europe.

The General Agricultural Workers’ Union (GAWU) is an affiliate of the Trades Union Congress-Ghana and the biggest trade union organising farmers and agricultural employees in Ghana. 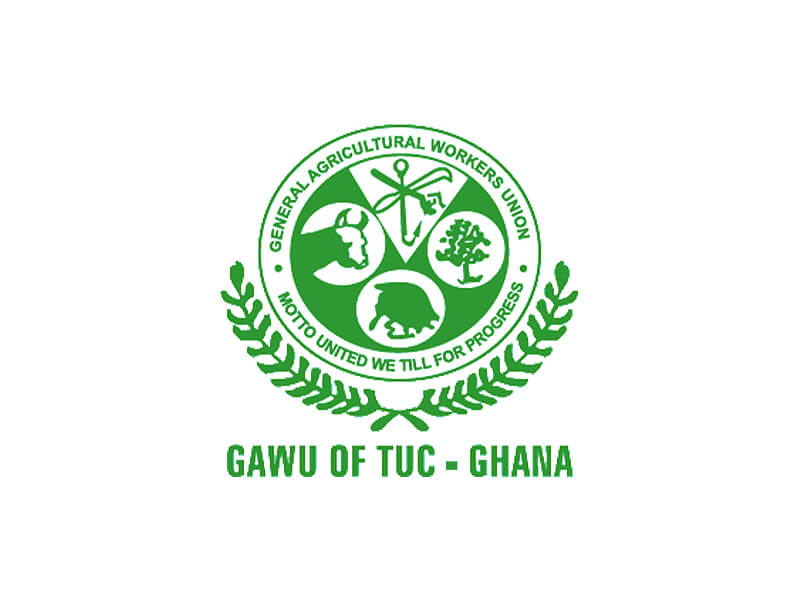 Our work in Ghana

Between 2013 and 2016, Banana link worked with General Agricultural Workers Union of Ghana (GAWU) to educate and empower workers and their unions to negotiate living wages and improved conditions on banana and pineapple plantations.

Ghana has only developed a commercial banana and pineapple industry in the past couple of decades, exporting to Europe, mainly France and the UK. Workers on plantations suffer from poor wages that don’t meet their basic living costs, leaving them in poverty which leads many into spiralling debt, while working long hours in hazardous conditions, with poor protection from illness and injury.

To address these problems, Banana Link’s Securing Decent Work in tropical fruit export production project has delivering an education programme for trade union representatives and workers to help them understand their rights and negotiate better wages and working conditions.
In the video to the right, workers and union officials talk about how they have benefitted from this training programme. Our Achievements In Ghana GAWU have negotiated pay increases which have seem average monthly take-home increase by 92%: from GHC 198 in 2013 to GHC 380 in 2015. 54% of workers now report that their wages are sufficient to cover the costs of daily necessities such as food, housing, utilities and their children’s education and identify that the wage increases negotiated by GAWU have caused this increase in capacity to cover household costs.

Workers have also received financial management education via the unions to enable them to better handle their limited incomes, resulting in them borrowing money at lower interest rates.

Since 2013, working hours have reduced from an average of 48 hours a week (despite the legal maximum being 40 hours) to 37.5 hours a week, with most working days not exceeding 8 hours.

The amount of unpaid overtime has significantly been reduced as well: in 2013, 89% of workers believed that overtime was compulsory and were unclear about whether additional preparatory work constituted employment, whereas now, the majority of workers receive payment for overtime.

As a result of the education project in Ghana, 66% of workers are now aware of at least one of their labour rights, compared to only 28% at the start of the project.

Nearly 80% of workers attended a GAWU meeting or workshop in Year 3 of the project, from informal sessions run by their peers, to workshops to better understand the company rules, labour laws and collective agreements relevant to their daily lives.


Provision of appropriate equipment is essential in order to protect workers from hazards. Poor quality or incorrectly sized Personal Protective Equipment (PPE) can lead to various injuries.
97% of workers reported receiving PPE across the 4 plantations surveyed, and improvements can also be seen in the number of workers using their own resources to purchase and repair PPE – a fall from 40% to 25%. However, many workers still report that the PPE they receive is insufficient for the tasks they undertake, so there is still a way to go.

Using findings from our 2015 research, that showed women would prefer an allowance for off-site childcare, GAWU is better able to engage in dialogue with management about appropriate provisions to meet workers’ needs.

The International Union of Food workers (IUF), with the support of Banana Link, successfully facilitated the launch of the African Network of Women and Men Banana Workers in 2013 at Limbé in Cameroon. With valuable support from the German Friedrick Ebert Foundation, the fifth annual workshop brought together representatives from sixteen trade unions working in eight companies across Côte d’Ivoire, Cameroon and Ghana, bridging the francophone-anglophone linguistic divide.

Themes of the Meeting

The theme of building good industrial relations and improving working conditions was central to the meeting, with reports from union leaders and women’s committees on advances made in all three countries, particularly in building unitary trade union platforms where several unions operate within a single company.

The first ever participation of an African workers’ delegation at a global conference of the World Banana Forum was hailed as a historic step forward, with important interventions on a wide range of subjects from the delegates to the conference in late 2017 in Geneva. The Network decided to propose to host the fourth global conference on the African continent.

A multi-stakeholder round table saw representatives of two major banana companies from Côte d’Ivoire and of the Ministries of Labour and Agriculture contribute to the debate over how to continue building social dialogue and collective bargaining in the African industry.

The topic of the minimum agricultural wage in Côte d’Ivoire, which is barely one third of the level of the national minimum wage for all other sectors, provided a hot subject of debate. Participants agreed that this outdated dual-track remuneration system needs urgent attention, particularly in an industry which can afford to – and many cases does – pay well above the agricultural minimum.

However, wages in both the Ivorian and Cameroonian industries, especially for field workers in some companies, remain obstinately low, as testimonies from participants revealed. Housing allowances in Cameroon are far from covering the cost of renting decent accommodation, for example, whilst very low take-home wages in some companies in the fast-growing industry in Côte d’Ivoire have provoked industrial unrest in recent weeks. Calls for living wage benchmarks for the two countries were made, as a basis on which to build national strategies for implementation. In Ghana, where a living wage benchmark was set last year, trade unions will meet with Fairtrade and World Banana Forum representatives to discuss strategies for closing the gap between the lowest actual wage levels and the living wage level established for the banana industry in that country.

Reports from the women’s committee representatives revealed that, although the unions have developed their capacity in this area, there is still a deficit in some companies, where much more support is needed to make a difference on issues which have not been addressed adequately in the past.

The African banana industry has increased significantly in the last decade, with some African countries now in the top ten global banana exporters. However, this growth paired with the outdated and unjust agricultural legislation has created an industry in which workers do not have sufficient rights and conditions. Workers are suffering through unrealistic minimum wage, prohibitions of union activity and human rights violations in some cases. Borders and language barriers have prevented the unification of trade unions across Africa and Cameroon, but platforms are now being created to encourage communication. Banana Link’s Policy & Communications Officer, Paul Lievens, takes a look at a recent report published jointly by Banana Link and the International Union of Foodworkers (IUF) examining the situation of banana workers in Africa and the necessity of a united voice.

Following the success of our programme to educate and empower workers on plantations in Ghana, Compagnie Fruitière, the largest banana producer in Ghana, has partnered with Banana Link and the International Union of Foodworkers to tackle the disproportionately low levels of women’s employment on their subsidiary Golden Exotics Ltd (GEL) 2000 hectare Fairtrade certified banana plantation in the Eastern Region of Ghana.

Alongside this, the project is also seeking to attract more women from the local community to work on GEL’s expanding organic banana farm.