“The current instability of the labour market wears the face of a woman; it is our responsibility to fight to improve our working conditions to ensure that we are employed with decency and dignity from this day and onwards”.

Women working in banana and other tropical fruit production across Latin America and West Africa are increasingly struggling against instability, inequality and discrimination in the workplace.

Often working 14 hours a day without overtime pay, women lack the freedom to organise, without their rights being respected.

Women are sacked for being pregnant, have no ante or post-natal maternity rights and many suffer sexual harassment in the workplace, while high levels of toxic agrochemical use puts pregnant women and nursing mothers at high risk of negative health impacts for themselves and their (unborn) children. 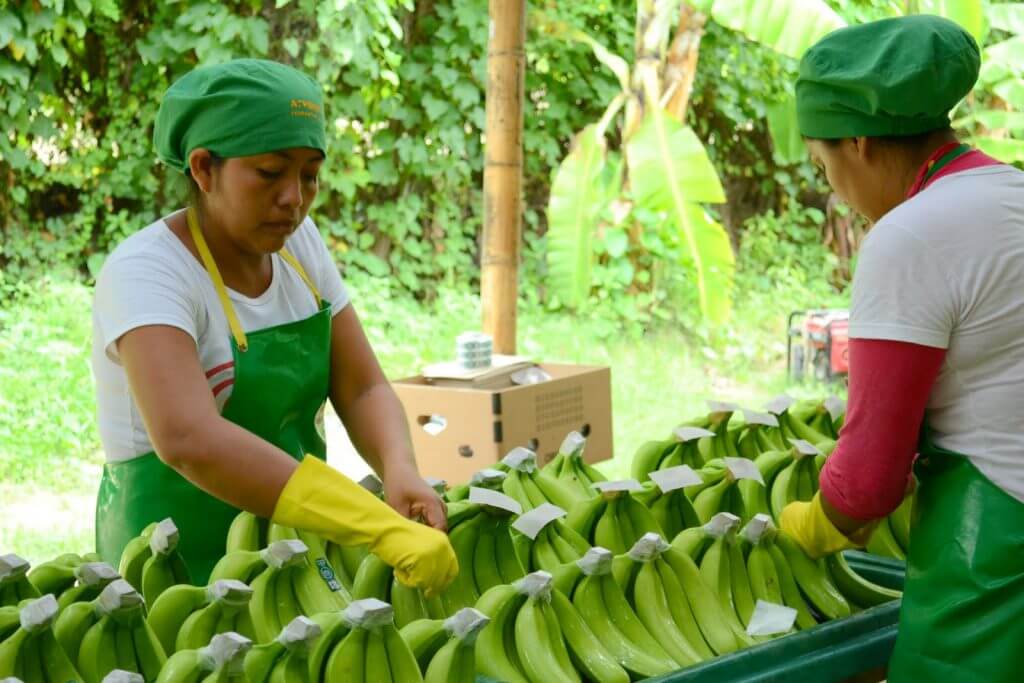 Women represent a small proportion of the workforce on Latin American plantations – as little as 7% – and are frequently hired on short-term contracts and are at constant risk of losing their jobs. Employers are often unwilling to provide maternity benefits, perceiving women as ‘high risk, high cost’ employees.

In some Latin American countries women have to produce medical certificates proving they are not pregnant, or submit to pregnancy tests before they are given jobs. Pregnant women can be summarily sacked.

The cultural perception in Latin America that women lack the ability to undertake physically demanding or technically skilled roles, means they are often restricted to tasks within the ‘more controlled’ environment of the pack house.

A lack of access to training for more skilled and better paid roles, leaves many women earning less than men. The situation for women workers in Africa is very much the same.

Sexual harassment in the workplace is commonplace and justified by some male banana and pineapple producers as ‘part of their culture’. COLSIBA (The Regional Coordinating Body of Latin American Banana & Agro-industrial Product Unions) campaigns to end such treatment of women, and was, for example, successful in getting Chiquita to introduce the first sexual harassment policy in the Latin American banana sector.

Unions are working with women members to make them realise that domestic violence is a matter for the police; that it is not a private problem. According to women organisers, “if he supports me, I belong to him, if he hits me it’s because I’ve done something to deserve it” was a common response.

This is not acceptable and is slowly changing. In Honduras, for example, trade unions have successfully fought to introduce a new law against domestic violence and are campaigning to raise women’s awareness of the law and their rights.


Childcare & The Division of Domestic Labour

A lack of childcare provision negatively impacts women workers, who have to take time off work to look after children.

In Latin America, for example, the majority of women workers are single heads of households, meaning they have to rely upon family, neighbours and friends, or, in some cases have no choice but to leave children on their own.

In addition to long working hours, domestic tasks mean women are working up to 18 hours per day, with negative effects on their health and well-being.

For decades there has been a lack of female representation within Latin American banana workers unions. COLSIBA recognises that “men alone cannot fairly negotiate about certain elements of work on the plantations. Women also need a voice for their needs.”

In 2013, COLSIBA elected Iris Munguia as Coordinator at COLSIBA, becoming the first woman to be elected to lead COLSIBA, and illustrating the great progress Latin American unions have made in terms of gender representation.

While in Honduras, Oneyda Galindo, president of the SITRASURCO, and first woman leader of a banana workers union, has said “we’re very proud to say that over half the members of the union are women…thanks to a lot of awareness-raising work.”

High levels of toxic agrochemical use in the fields and pack-houses causes women to suffer skin lesions, respiratory problems, cancers, miscarriages and birth defects in their children.

There is often a lack of adequate medical equipment, meaning women have no access to essential services such as gynaecology and breast examination. Other health problems include backache and varicose veins caused by cramped conditions.

Wages are so low that women are often forced to stay out in the fields during aerial pesticide spraying because they can’t afford to lose the pay. Working for gender equity is among our core strategic aims, including to:

We pursue these aims through our participation in the World Banana Forum, which brings together stakeholders from the whole banana production and distribution chain to work towards sustainability and achieve consensus on best practices in the banana industry.
We also work with partner trade unions in Latin America and West Africa to help build the capacity of women to be part of the collective bargaining process.
Our focus on the rights of women workers has, among other things, seen gender clauses integrated into collective bargaining agreements and increases in the numbers of women holding leadership roles in the trade unions. Our recent actions on gender equity include:

Participation of Women Workers in The Global Banana Industry

Banana Link has produced a series of working papers for the World Banana Forum, analysing the participation of women workers and small producers in the global banana industry, including recommendations towards the provision of Decent Work and sustainable livelihoods for these women actors.


This research aims to improve our knowledge of the participation of women, as workers and also as small farmers, in global banana production.

Each regional report – Latin America, Africa and the Caribbean – includes:

The Global Overview provides a summary of the situation for women workers and producers on an international level and includes a series of subsequent recommendations targeted at various stakeholders – civil society, small producers, companies, retailers, certification bodies, and multi-stakeholder platforms – towards the provision of Decent Work and sustainable livelihoods for women in the banana sector.

The aim of the research is to inform decision making and the development of appropriate activities and programmes on gender equity within the framework of the WBF and within the ongoing activities of its banana industry members.

However, this information will hopefully also be relevant to anyone with an interest in issues of agriculture, gender equity, and socio-economic development.

The research was commissioned by the WBF, which is hosted at the Food and Agriculture Organisation of the United Nations, and undertaken by Banana Link in collaboration with local trade union partners in banana producing countries.

Input was also received from some local companies and certification bodies, as well as from the WBF Steering Committee members and the FAO Department on Gender. Key causal factors for these differing levels of participation include: 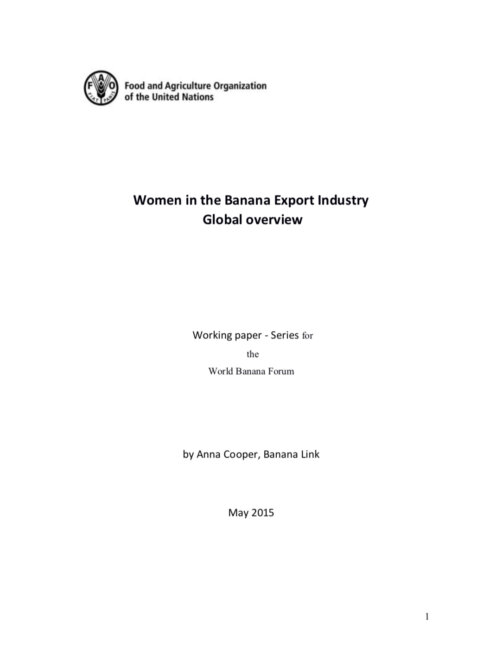 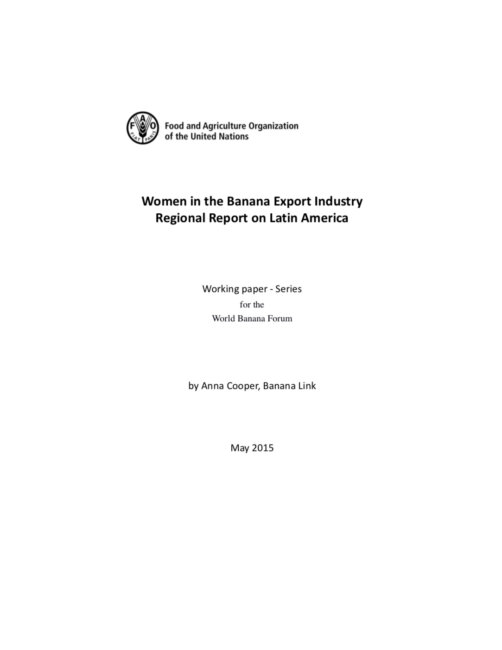 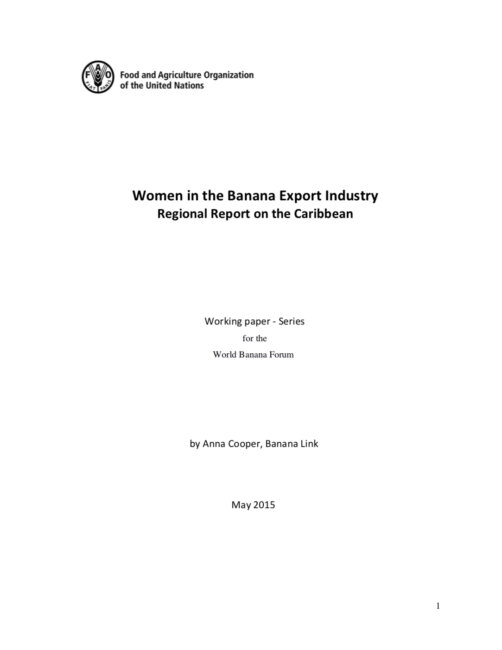 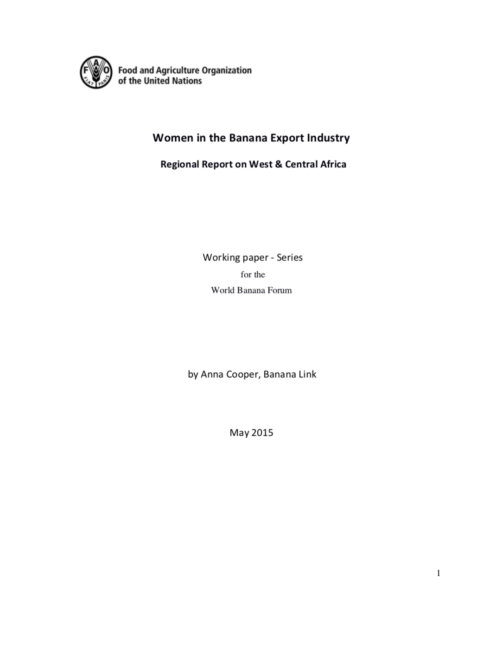 In this interview, trade union activist Iris Munguia describes how lack of respect for workers’ labour rights is widespread in Latin America, especially where there are no unions. Abuses include long working hours, low wages, discrimination and sexual harassment.

After working in the packing depot of one of Chiquita’s banana plantations in Honduras for 23 years, Iris Munguia became a trade union leader and a defender of women’s rights.

This interview was filmed in June 2011, before Iris was elected as the first ever Coordinator of the Coordinating Body of Latin American Banana and Agroindustrial Workers’ Unions COLSIBA and received the prestigious SOLIDAR Silver Rose Award for her contribution to International Solidarity.

A Banana Link education programme in Ghana between 2013 and 2016 has empowered women workers to become active in promoting health and safety on plantations.

Having received training themselves on health & safety, the women are then empowered to provide training to the other workers on their plantations.

Since 2013, commonly reported health problems have declined by a third thanks to increased union activity with both employers and workers.

Since 2013, 97% of workers report receiving appropriate PPE, while the proportion of workers who have to use their own resources to purchase or repair PPE has dropped from 40% to 25%.

Adwoa Sakyi, the IUF Africa Women’s Project Coordinator explains a little about the barriers to women working on banana farms, and her hopes for a new project involving the IUF, Banana Link and GEL management and unions to increase women’s employment.

Golden Exotics Limited (GEL) are working in partnership with the International Union of Foodworkers Africa (IUF) and Banana Link to improve working conditions for women on their 2000 hectare Fairtrade certified banana plantation in the Eastern Region of Ghana.

Alongside this, the project is also seeking to attract more women from the local community to work on GEL’s expanding organic banana farm.