At first glance, the world banana and coffee markets appear very different. Both are amongst the two most traded agricultural commodities in the global economy, but the coffee market has grown massively in recent decades, whilst the banana market has only seen very limited growth. Coffee companies have been able to create a huge leap in the total value in the chain, whilst banana remains a sector struggling to create new value.
Thanks to the huge value created by new formats, particularly in the form of coffee pods, the world coffee market has grown to be worth around 200 billion dollars per year for 9 million tonnes traded. In the case of bananas, with nearly 20 million tonnes traded, consumer value struggles to rise much above 25 billion dollars.
A ground-breaking study by the Paris-based Bureau for Societal Analysis for Citizen Information (BASIC) – funded by the French fair trade platform, Fairtrade labeller Max Havelaar France and the Rethinking Value Chains network (co-coordinated by Banana Link) – has revealed the truth behind this apparent explosion in the value of coffee. Over the last 20 years roasters and retailers have reaped an additional 1.2 billion euros from annual coffee sales, while farmers and traders have earned just 64 million euros more. Over this period the revenue gained by the producing countries has gone down from 24% of the value in the mid-90s to 16% in 2017.
Yet the majority of coffee farmers today are suffering a decline in their standard of living and in their working conditions. Faced with regularly falling worldwide coffee prices (below $1 per pound in September 2018) and increasing production costs linked to labour and inputs, and dependent on their buyers, growers are also suffering from a critical lack of working capital. As a prime example, in 2017, Peruvian and Ethiopian coffee farmers had an average income that was 20% less than that of the previous 12 years, keeping them below the poverty line.
In the French market, the increased revenues generated by the marketing success of coffee in pods and capsules benefit an increasingly concentrated industry, the study found. The three primary players, Nestle (34%), JDE (30%) and Lavazza (17%) now represent 81% of the market, compared with 70% in 2008. This concentration of dominant players is reinforcing their bargaining power throughout the supply chain.
The likes of Starbucks and Ali Baba have invested big time in this boom, but the benefits of coffee sold for as much as 60 euros per kilo in pods or for five dollars a cup is not getting back to the 25 families who depend on coffee income for a living.
Aside from the analysis of this highly unfair ditribution of value in the market, the BASIC study also alerts us to the impact of climatic deregulation. The changes currently under way could lead to a 20 % drop in yields by 2050. Small farmers are already the first victims, especially where they have been encouraged by coffee companies, certifiers or government policies to plant just coffee in a monoculture system. Traditional agroforestry systems in the world’s centre of coffee diversity – Ethiopia – are under threat from the push to greater short-term productivity.
But small farmers in East Africa and elsewhere have known for centuries that inter-cropping and agroforestry systems reduce their economic vulnerability. Their contribution to climate resilience now needs to be recognised and pushed by organisations that have until now believed in intensive monoculture.

As with bananas, the future does not lie with more and more intensive monoculture with the loss of disease resilience and all the ecological and social costs associated with such systems. The study is a wake-up call to all, be they economically dependent on coffee or just consumers.
“This study reveals the same trend that we observe in many value chains today: a growing and indecent concentration of wealth and power in the hands of the actors in consuming countries, whilst the producers and their workers at the other end of the chain fall even deeper into poverty : Peruvian coffee producers today receive only 11.6% of the value of a packet of ground coffee compared to 24% of the value twenty years ago … and less than 3% of the value of their coffee put in a Nespresso pod. The wages of seasonal employees are hence often 40% less than a living wage and, as within most of the world economy, it is the women – who carry out 70% of the production and harvesting work in the global coffee sector – who are the most affected by the inequalities. The study includes important recommendations to address these inequities and put in place sustainable and equitable alternatives that put people and the environment first. These alternatives that will be supported by our network. ” Anna Cooper, Banana Link / Re-thinking Value Chains network Coordinator 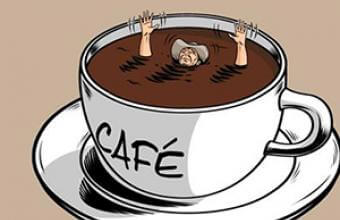