Adela Torres, General Secretary of Colombian agricultural workers union SINTRAINAGRO, was elected as the new Coordinator of Latin American banana and agro-industrial trade union coordinating body, COLSIBA in late 2021. Adela will be the second woman to hold the post that represents workers in the highly male-dominated Latin American banana industry.

Adela brings valuable experience from the Colombian banana industry where she has worked as General Secretary of SINTRAINAGRO for the last sixteen years. Today, SINTRAINAGRO is the only union in the Latin American banana industry to a enjoy sector-wide collective bargaining agreement. This is a remarkable accomplishment, given the wider context of trade union repression in Columbia. We spoke to Adela about her work with SINTRAINAGRO and what sets the union apart from others in the country:

“SINTRAINAGRO enjoys mature industrial relations with businesses- in contrast to unions operating in other industries in Columbia. We have a very clear focus: to defend the labour rights of banana workers. But we have also focussed very carefully on not demonising businesses and employers, in not falling into a position of polarisation. Our role is to propose solutions and keep moving forward. If a model isn’t working, then we look for a strategy that will enable it to work.”

“For example, when COVID-19 hit, a lot of workers had complaints about health and safety measures. They were really fearful of catching the virus. Our response was pragmatic- we immediately looked for solutions. In reality, this meant meeting with the producers’ association and drawing up a list of twenty-eight protocols that would ensure the health and safety of workers was protected. And I can say with complete conviction, that banana workers were the least affected by COVID-19 than any other agricultural industry. We are a union that makes proposals without losing sight of our objectives.” 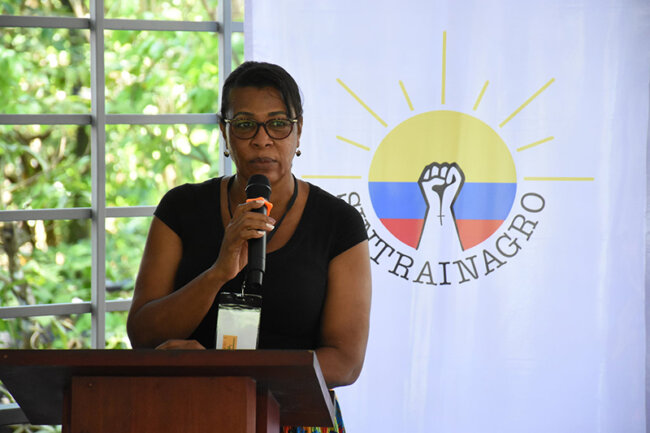 Colombia is the world’s fourth largest producer of bananas for the international market, exporting 1 896.1 thousand tonnes in 2019, and is the largest source of Fairtrade certified bananas in the world. However, the participation of women in the industry has been traditionally been remarkably low. In 2015, only 7% of the workforce were women. And a government study in 2020 showed that 24% economically active of women in the banana producing region of Urabá were unemployed, compared to only 6% of men – with women undertaking more hours of unpaid work with worse social security conditions. There are a variety of factors behind this, from the prevalence of macho culture that expects women to stay home and care for children, to employers who view women as less capable and more expensive than men, to a lack of female leadership and low self-esteem on the part of women themselves. Adela experienced the difficulty of entering a male dominated space herself.

“It was a challenge for me at first, as a woman, to become involved with the union. But, after 6 years, I was elected General Secretary of SINTRAINAGRO. That was in 2010. I am proud to have been elected, and re-elected in this role – to occupy this position of leadership for so long is a big achievement. Over the last four years, I have coordinated a lot of the gender work at SINTRAINAGRO. However, I am still the only woman on the board, which is a shame.

During my time at SINTRAINAGRO, we have made meaningful progress in the area of collective bargaining. In the area of gender, we have spoken to business leaders to increase the number of women hired on banana plantations. This is part of a convention but also an agreement that we made with Banacol in 2019, who committed to hire an additional 400 women workers. Even despite the barriers presented by the pandemic, 80% of the women have now been hired.”

Drawing on her experience in SINTRAINAGRO, and also as a councillor for her local region of Apartadó, Adela hopes to keep gender top of the agenda for the Latin American banana industry, and to prioritise international collaboration and dialogue across the industry, as the best way to push forward improvements for workers. 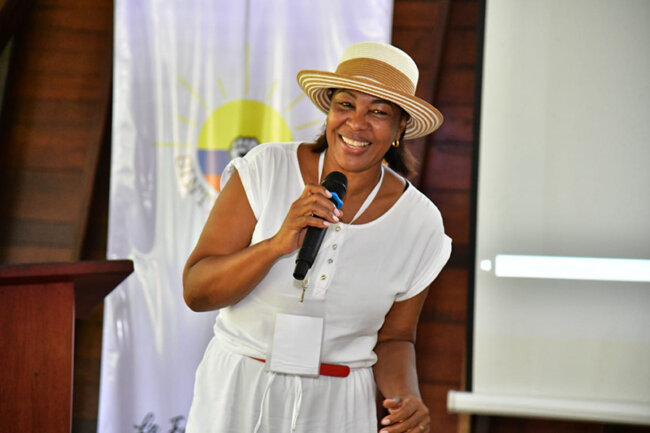 “Maintaining dialogue with businesses in different sectors has been important – and a big achievement- but it goes beyond that, because the negotiations we have held have enabled us to make important international alliances. Working as General Secretary has given me a broad perspective-I have actively participated in international spaces like the World Banana Forum, and at a national level, I have presented workers concerns and proposals to the Ministry of Labour here in Columbia. And I am proud to have occupied these spaces as a woman in a position of leadership, in an organisation and an industry that is dominated by men.”

“Looking forwards, as Coordinator of COLSIBA, we have work plan is clearly focussed on addressing gender inequity, on women’s participation and women’s health, labour rights including women’s labour rights. And it’s important that these issues are dealt with in national and international spaces, because the issues women banana workers face are the same as those that women in many other sectors face. I am a woman, and so I bring a lot of energy to ensuring that women’s agenda is central to the work we undertake in COLSIBA- we have a plan, and we will continue to represent women in the banana industry and make their struggles visible.”

Listen to Adela talking in this video about the commitment of the SINTRAINGRO union in Colombia to improving the employment of women in the banana sector. [In Spanish] 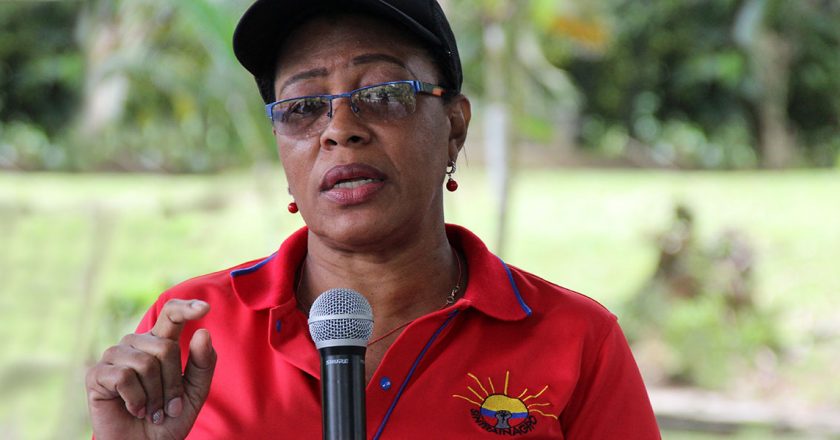