Following a lawsuit filed by trade union Sintracobal, which represents workers at Chiquita, and the Latin American Region of the International Union of Foodworkers, the Labor Court of the First Judicial Circuit of the Atlantic Zone has this week issued a judgment declaring the dismissal of the members of the board of directors of Sintracobal unlawful.

The judgement orders their reinstatement at the same working and salary conditions to the position they held before the dismissal or, failing that, their relocation to equivalent positions and with the same salary.

It also orders Chiquita Brands to pay the plaintiffs the wages they did not receive from the date of the dismissal and until their effective reinstatement.

One year on from the laying off of 180 workers at Chiquita Brands’ port operations terminal in Limón, Costa Rica, their union continues to fight for justice and to mitigate the impact in one of the provinces of the country’s hardest hit by poverty and unemployment.

On March 4th last year, Chiquita Brands made the decision to close the port operations department. Many workers were notified by WhatsApp, whilst others arrived at the workplace to find the gates locked with padlocks.

The banana transnational explained that the closure was a consequence of a change to port operating procedures following the granting of a concession to the multinational APM Terminals, which seriously affected Chiquita’s ability to continue its port operation.

The unions however, saw it differently. “It was all a lie. The closure was due to a company strategy to outsource their operations, eliminate the union and ignore collective agreements” said Maikol Hernandez, General Secretary of the Sintracobal union.

Following the lay offs, the union entered into conciliation talks with Chiquita, as prescribed by Costa Rican labour law, but were unable to reach any agreement.

Consequently, the union filed a class action lawsuit for violation of their collective agreement with Chiquita, as well as a lawsuits for special cases, such as pregnant and lactating workers, workers with disabilities and dismissals due to discrimination.

So far, the court has ordered the reinstatement of one of the lactating women, all other cases await processing.

Along with the closure of the Chiquita operation in Limón, rival fruit multinational Dole, and other companies, closed their operations there, leaving a total of more than 1,100 workers unemployed in the already economically ravaged region.

To help mitigate the impact of unemployment, Sintracobal entered into a strategic alliance with the Universidad San Juan de la Cruz to deliver a work empowerment programme for laid off workers. At the time of writing, out of 350 people who started the new skills development programme, 52 have already graduated and a total of 330 workers are expected to receive their diplomas in May this year. Although, currently, only about 20 workers have found permanent or seasonal employment.

The union is calling for more to be done, “we need the government to redouble efforts to implement public policies that facilitate new investments and job creation. Hunger does not wait,” concluded Hernández.

Álvaro Ramírez of the United Nations’ International Labour Organisation (ILO), who has helped to facilitate the initiative, recognises the important role of the unions in mitigating the situation.

“It was the union that facilitated the implementation of mechanisms to serve the affected population, which did not exist in Costa Rica” he told IUF Latin America. “And it did not end there, because later, the same union and its network of advisers and solidarity organisations became directly involved in the execution of the training and retraining programmes.“

“It was a different way of facing an emergency of this size and the way things have been evolving fills me with hope, because there is a future at the end of the tunnel in the history of Limón” Ramirez concluded.

In a separate initiative, Dole, who closed their maintenance operation in Limón last year, signed an agreement with a cooperative made up of 124 of its former employees to provide them with a one-year loan of the facilities of the Dole workshop to launch their own business maintaining and repairing containers, trucks and cargo cranes.

Once the loan year is over, the cooperative, Coopesitraco, will be able to assess the possibility of signing a rental contract with the company to continue using the facilities with responsibility for the property. 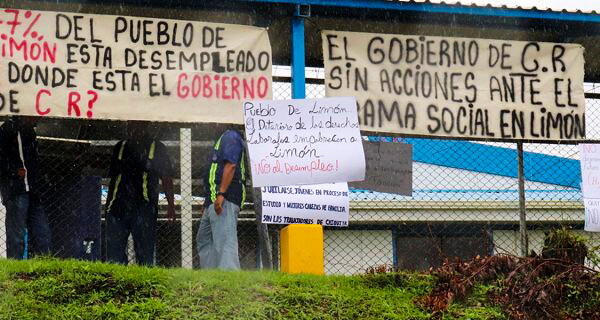