Blog: Could a ban on selling below cost price help banana producers?

In the light of the Spanish government’s current review of its legal prohibition on supermarkets selling agricultural produce below cost price, and banana industry debate around ALDI’s proposed contract price for 2021, Banana Link Policy and Communications Coordinator, Paul Lievens, considers how such a globally wider prohibition might contribute to fairer prices for banana export producers.

The Spanish Government Congress is currently holding hearings in a review of its Food Chain Law (Ley de la Cadena Alimentaria) that it introduced in 2013 with the aim of redressing imbalances in commercial relations between agricultural producers and retailers. In particular, debate is centred around provisions added to the law by Royal Decree in February 2020 that introduced a prohibition on retailers selling agricultural produce at a loss, and required retailers to pay producers a price equal to or greater than the cost of production.

In its contribution to the debate, the Organisation of Banana Producers of the Canary Islands (Asprocan) is calling for an exemption to these provisions, as it forces them to sell at a minimum price that leaves them at a competitive disadvantage to cheaper bananas imported from Latin America, that are not subject to similar price maintenance measures. Given that, as Banana Link and many others have argued for many years, prices paid by European retailers for imported bananas are too low to cover Costs of Sustainable Production (COSP), we would suggest that the problem should be looked at in terms of Latin American imports being too cheap, rather than Canary Island bananas being too costly.

Saying that will not, however, provide any practical encouragement to Canary Island banana farmers in their understandable desire to be released from legally imposed uncompetitiveness. But it does raise questions about how the market forces that are responsible for maintaining unsustainable prices paid to Latin American producers by European retailers might be pushed up to COSP levels.

Export producers in Latin America, and other export production regions, currently face many challenges such as: controlling and averting the threat of TR4, adapting to climate change, transitioning to more sustainable production methods, earning a living income in the case of small-scale family farmers and living wages in the case of plantation workers, and addressing other external social and environmental costs of production. All this, notwithstanding the additional costs arising from implementing measures to contain the spread of Covid-19.

As one Latin American producer pleaded at a World Banana Forum panel discussion I attended at Fruit Logistica in Berlin last February – “How can you expect us to deal with all these challenges if we do not get a fair price for our bananas?”

A very good question indeed, and one that, to date, has yet to be answered comprehensively by the banana industry, and which has been revived again in the wake of the announcement of Aldi’s proposed contract price for 2021. While appeals to the goodwill of retailers might provide temporary relief, ultimately the retailers are commercial entities subject to the “iron laws” of a capitalist market economy that require them to keep costs to a minimum and maximise returns to their shareholders. As such, a lasting sustainable solution will probably require market intervention of some sort, maybe along the lines of the Spanish Food Chain Law, extended internationally to protect export producers in Latin America.

It is certainly arguable that UK competition law, and by extension, European competition law upon which it is based, does little to protect producers from bargaining imbalances with powerful European retailers. Premised on the notion that healthy competition delivers the best deal for consumers, competition law does not anticipate that, in delivering on that notion, it can come at the expense of producers, as amply demonstrated by the “race to the bottom” in banana pricing that UK supermarkets have engaged in over the past ten to fifteen years.

The UK government has at least recognised this and gone some way to address it through the establishment of the Groceries Code Adjudicator (GCA) in 2013, with powers to tackle abuse of buying power by supermarkets to impose unfair trading practices (UTPs) on producers. But given that the redress on offer is limited to the supermarkets’ direct suppliers within the United Kingdom, it is of little benefit to overseas banana export producers. And even if it did extend beyond UK borders, the Groceries Supply Code of Practice only applies to specified UTPs such as unilaterally varying contracts or withholding payments to producers without legitimate contractual justification. The matter of negotiating the selling price itself is not among them. Moreover, the GCA’s own research suggests that at least some producers are unwilling to bite the hand that feeds them by referring an unfairly acting retailer to the adjudicator.

The European Union has also recognised the need to regulate imbalances of bargaining power between large retailers and producers in its adoption of Directive 2019/633 on unfair trading practices in business-to-business relationships in the agricultural and food supply chain. And while the directive may provide redress to overseas producers selling directly into EU markets, as with the UK Code, it applies only to a similar list of specific UTPs, subsequent to the establishment of a contract between supplier and retailer, but not the negotiation of price in the first instance.

Fairtrade certification has demonstrated through the guaranteed minimum prices it pays to farmers that marketing bananas (and other produce) at a premium and providing producers with a fair price certainly is not impossible. Although, given it is a voluntary scheme, intended to benefit those whose production methods and employment practices meet specified ethical standards, those producers outside it remain exposed to retailer pressure on prices. That is not to say Fairtrade prices are wholly detached from the economic reality of market demand and supply either, but, and I know this sounds pithy, if all trade could easily be “fair trade”, I would not be writing this piece in the first place.

Which brings me back to where I started, which is prohibiting the sale by retailers of produce at below cost price. Not only do the Spanish have such a legal provision, but so too do Belgium, France, Germany, Italy, Luxembourg, Portugal. Without going into the specifics of the laws in each of these countries – you can do that here: https://www.enterprise.gov.ie/en/Publications/Publication-files/Chapter-Nine-Regulations-in-Other-Jurisdictions.pdf – the original premise behind many of them was to deter predatory pricing by a retailer in an attempt to undercut competitors or to discourage new entrants into the retail market, rather than protect producers from “predatory” retailers.

The UK has no such prohibition on selling below cost price, but UK competition law does provide for regulatory action against a retailer who abuses their dominant market position and uses “predatory pricing” in an anti-competitive manner.

And while the various prohibitions on selling below cost price around Europe might not have been designed for the purpose of protecting producers and ensuring they receive COSP for their produce, Banana Link is beginning to wonder if a prohibition to this effect, extended to overseas producers, might be one way to reverse the “race to the bottom”.

Looking towards the post-pandemic world, it would appear likely that some sort of economic rebuilding akin to that seen globally in the wake of the Second World War will be necessary, and to do that, governments will slay some of the neo-liberal economic shibboleths that have come to dominate global trade over the past forty years, and turn to more interventionist policies to support post-pandemic economic development. Indeed, Joe Biden’s “Build Back Better” plans in the US, along with the appointment of Bernie Sanders as Chair of Senate Budget Committee, seem to signal a move in that direction, while Vice-President Kamala Harris has a background in campaigning for farmworker rights domestically and has signalled initiatives around food justice.

We may therefore be looking at a world becoming more sympathetic and receptive to market intervention to protect banana export producers and those plantation workers and their communities that rely on the banana trade for their livelihoods, along with those in the global supply chains of other produce afflicted by the same challenges as the export banana trade.

Not that at Banana Link we won’t continue with our efforts on other fronts to promote fair and sustainable trade, such as our commitment to promoting constructive dialogue between industry stakeholders through the World Banana Forum, educating consumers to make ethically informed purchases, capacity building with small farmers’ organisations and plantation workers unions, for example, but we look to the future with a little more optimism that a better banana trade is possible. 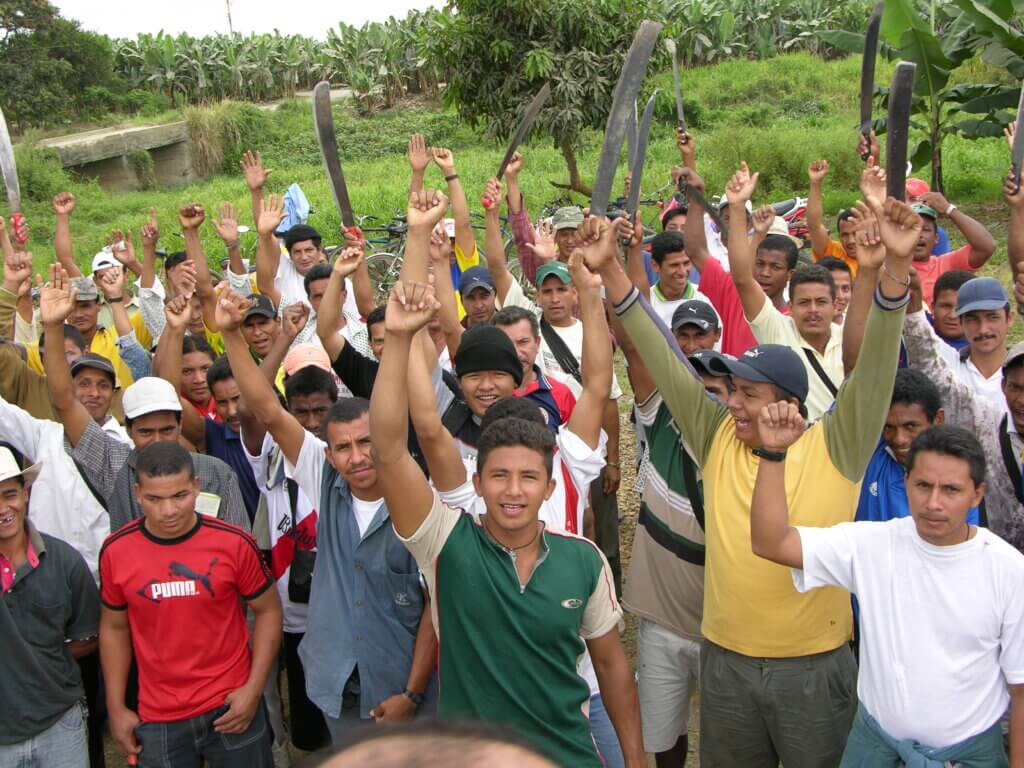