Strong and influential trade unions are the foundation for true social justice in the world of work, as much in Africa as in any other continent on the planet.

Banana Link’s Policy & Communications Officer, Paul Lievens, takes a look at a recent report published jointly by Banana Link and the International Union of Foodworkers (IUF) which examines the situation of workers employed in banana export production in Africa, and why a united voice is necessary to address the challenges faced on plantations.

The banana sector in Africa

Latin America continues to dominate international trade with six of the seven main exporting countries supplying 80% of the global market. The top exporting African country is Côte d’Ivoire, currently in eighth place in global rankings, whilst Cameroon is tenth and Ghana fourteenth.

The banana export sector in Africa has been expanding over the last decade. It is characterised by a number of key elements, including:

However, decent working conditions and good industrial relations are lacking in some parts of the industry. In the francophone countries there is obsolete national legislation that no longer reflects the reality of the working environment, while some companies take advantage of completely outdated minimum wage levels to minimise labour costs and maximise profits.

Moreover, the current level of worker representation, social dialogue and collective bargaining is unable to meet the needs of workers. Many find themselves grouped into micro-organisations, resulting from the fragmentation and proliferation of trade unions, with low capacity, leading to unequal power relations and unfavourable outcomes for workers and their causes. The specific rights of women workers are still not recognised or respected in many cases.

Meanwhile, in some companies, human rights in the workplace are not respected at all, with workers unable to organise into unions for fear of being sacked or of other forms of retaliation.

The state of African trade unions

Ten years ago, banana workers’ unions in Africa were unaware of each other’s existence. Workers themselves had even less awareness of the various trade unions representing those employed in the banana sector. National borders and language barriers between countries, and language barriers within Cameroon, meant workers had little contact with each other. And this was despite the fact that more than half of African workers were employed by the same company.

This proliferation of trade union organisations, with their divergent ideological and political affiliations, their competing leaderships and, above all, the dubious credentials of some of the people in charge, has not led to the sort of unified, effective and results-oriented trade union action that could meet workers’ expectations.

To address this, the IUF and Banana Link have supported the creation of trade union platforms as an umbrella structure in a given company. These unitary platforms have become the sole vehicle for conducting dialogue between workers’ representatives and management. Platforms have already been established at Plantations de Haut Penja (PHP) in Cameroon and at SCB in Côte d’Ivoire.

The need for a New Social Dynamic

Along with supporting the building of platforms, the IUF and Banana Link have also sought to introduce other procedures to unite all social forces within a company, a process known as the trade union “New Social Dynamic”. Union leaders and company managers meet in regular social dialogue about a wide range of issues affecting the company, think together, act together and evaluate the results of actions together.

Drawing on experience in Latin America

The work of the Coordinating Body of Latin American Banana and Agroindustrial Unions (COLSIBA) illustrates how more strategic unity of action leads to a stronger trade union movement, while also identifying the risks and challenges to coordinated action, such as maintaining a common agenda and sense of purpose; the need for resources to be devoted to education and training; and the need to train a new generation of women union leaders on common issues and shared ideas and values.

With more than 9,000 hectares of bananas planted in the three main African exporting countries, Compagnie Fruitière is by far the largest export producer on the African continent in terms of volumes exported, number of employees and logistical capacity, and the largest private employer in Cameroon and the second largest in Côte d’Ivoire.

Over recent years the company has demonstrated a real political will to become a responsible corporate citizen in all spheres of its operation and influence. The development of its relations with the twelve trade unions present in its three African subsidiaries confirm that the company has taken strides in a constructive direction that bodes well for the future.

The unions hope now to take the next step and have plans to negotiate an international framework agreement with Marseille-based Compagnie Fruitière. This move could turn out to be as influential in the banana world as the company’s accelerated evolution of its organic and agroecological production methods.

Key challenges to be addressed

The challenges in the African banana sector are numerous and complex. The report identifies those that appear most pressing:

This a big agenda and the road will be long, but the organised banana workers are already walking along that road. Banana Link calls on all those of good faith, and in a position to support the realisation of the African banana worker agenda, to be in touch with the IUF network coordinator in Benin or with us in Europe.

It goes without saying that the role of responsible employers in ensuring this agenda can be addressed constructively over the coming years is crucial. Without their understanding and active collaboration, the future cannot be co-constructed.

A United Voice for Banana Workers in Africa 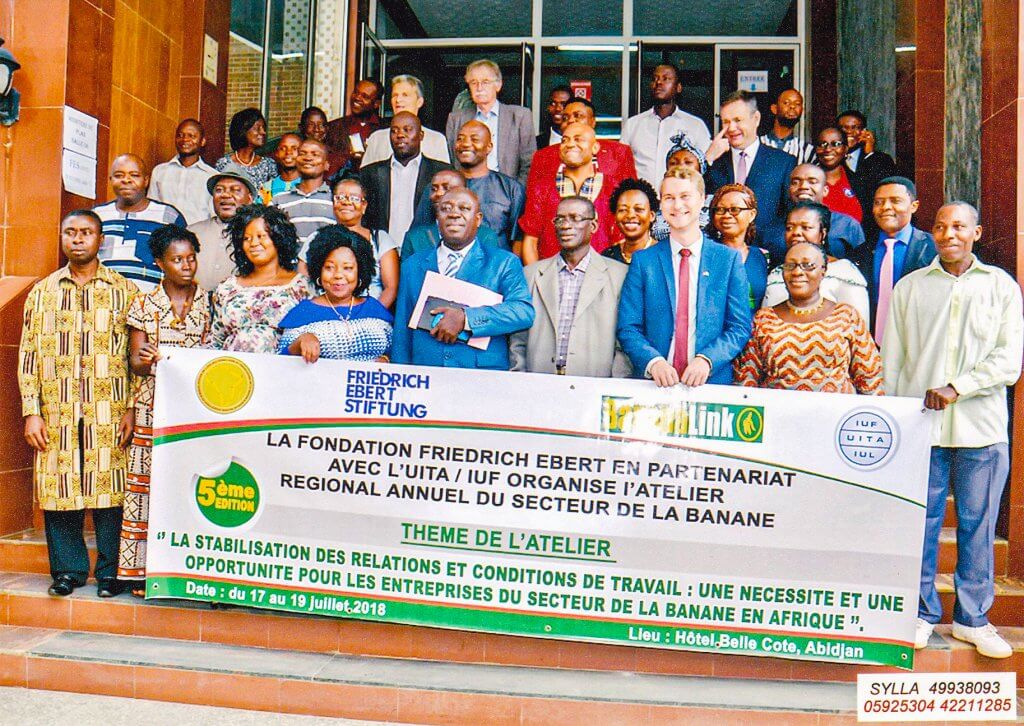