As the Covid 19 pandemic has spread through Latin America, trade unions representing plantation workers have sought the implementation of measures to protect the health and incomes of workers, while fruit companies seek to maintain supplies to European supermarkets.

Set out below is an outline of what we know so far in each of the major Latin America banana producing countries, based on reports from our trade union partners in the region. The response of employers has been varied, and has ranged from commendable in some to, at best, indifference in others, and attempts to impose detrimental changes in working hours and pay in others.

The International Union of Foodworkers (IUF) has drawn up a set of trade union demands for protecting agricultural workers and saving lives in the fight to contain the spread of COVID-19, which you can download here.

“Substantial, open-ended funding from national governments and international institutions must be made immediately available to ensure adequate protection and safe work for agricultural workers as an elementary measure for saving lives and protecting public health and food security. Urgent efforts are needed to ensure that workers have access to proper housing, with space for quarantine and social distancing while sleeping and eating, potable water and proper sanitation facilities on and off the job, free health care, safe transport, safe work practices and income protection.”

Following worker protests, the plantation workers union SINTRAINAGRO has negotiated a COVID-19 protocol with the employers association, Augura.  The main provisions of the protocol ensures:

SINTRAINAGRO officials are visiting plantations every day and report that although irregularities at some companies have been pointed out, in general, the vast majority of the plantations are following the protocols. rigorously.

In this video, SINTRAINAGRO President, Guillerma Riveira, sets out SINTRAINGRO priorities in ensuring the safety of plantation workers:

Ecuador has been the hardest hit by Covid 19 of the Latin American countries, with the city of Guayaquil recording more cases than the rest of the continent put together.

The virus so far has little presence in the rural banana producing areas of the country, and employers are providing little in the way of protective measures.

Many companies have reduced production by around 20%, and some workers have been dismissed, while other workers who aren’t fully occupied are sent home without pay for their contracted hours they do not work.

Covid 19 has been used as a pretext to push new legislation through the parliament, without consulting trade unions, that makes working hours more flexible, allowing employers to cut the working day (and pay) by 50% or more, without compensation for workers. Although, at the time of writing, we have no reports of employers in the banana sector taking advantage of this new legislation.

Trade unions in Costa Rica report that employers, including Chiquita, Dole, Fyffes and the national consortiums are not properly applying government protocols on hygiene as decreed by the Ministry of Health.

Covid 19 is being used across the food and beverage sector as a pretext to impose 12-hour work shifts, despite government regulations imposing an 8pm to 5am curfew on the population.

Most of the banana employers in the country are small scale producers, and are mostly not imposing social distancing measures or providing workers with protective equipment such as masks or gloves.

The banana workers union SITRAIBANA has agreed a protocol with employers Chiquita to implement protective measures, among which is a doubling of the number of company buses transporting workers to and from the workplace.

The banana workers trade union SITRABI has agreed a protocol with employers Del Monte, who are one of the few companies that has built separators inside their packhouses to protect workers, as well as doubling the number of worker transport buses.

Del Monte has, however, asked SITRABI to defer by 6 months a collectively negotiated pay increase, and at time of writing the union are in discussion with Del Monte on this request. 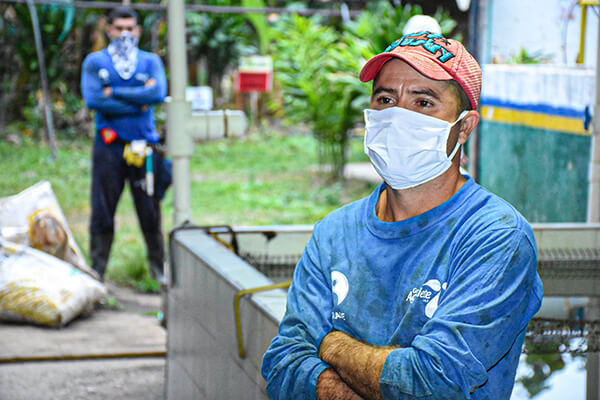