Which supermarkets are doing the most to protect the rights of food workers?

We reproduce below a blog by Rosa Polaschek of Oxfam GB’s Private Sector Policy team on business and human rights developments.

As the Coronavirus pandemic drives home the importance of the frontline workers producing and supplying our food, Oxfam’s Behind the Barcodes campaign to improve the conditions of people in supermarket supply chains is more relevant than ever.

And yet, the 2020 Supermarket Scorecard highlights that no supermarket is doing enough to combat human suffering in those supply chains, despite progress over the past two years.

The scorecard shows how some companies are creating meaningful changes in their policies and behaviour while others are still lagging behind. Disappointingly, despite what we know about the particular vulnerabilities women face, supermarkets are weakest on the scorecard in their steps to protect women’s rights.

In the Coronavirus era, it is even more important that companies take up their responsibility to respect people’s human rights as a core part of their business practice.

SLOWLY TAKING RESPONSIBILITY … AND NOT

Some companies previously identified as laggards have shown real improvement. Specifically, Lidl, Rewe and Aldi North (Germany) have all made significant progress this year, as well as Morrisons and Sainsbury’s (UK). Lidl and Morrisons, who scored just 5% in our first year, have now had the largest overall increases of any company.

While no company has yet reached 50% overall in the scorecard, our public campaigning has meaningfully changed companies’ policies and behaviour. Tesco remains top of the scorecard and is the first company to gain a “green” on the scorecard specifically for its policies relating to workers’ rights, for which it scored 67%.

However, disappointingly, seven of the 16 companies have barely changed scores since last year’s assessment and five companies still have no women-specific policies at all. A regional pattern is also emerging, with US supermarkets making up three of the five bottom-ranked supermarkets (Whole Foods, Albertsons and Kroger, alongside EDEKA in Germany and PLUS in the Netherlands) – showing far less progress than the UK and other European supermarkets.

The lack of progress from some companies shows the need for continued pressure on retailers to take responsibility for their wider supply chains.

Oxfam has long warned of the limits of social audits to properly show the experience of workers, which is crucial to ensuring core labour standards are being met.

Half of the companies in our scorecard now explicitly recognise these limitations, and crucially, seven of those companies are taking new steps to better identify and address the human rights issues workers and farmers face.

Oxfam has long encouraged companies to use Human Rights Impact Assessments (HRIA). These are a more in-depth way to understand the realities in supply chains by properly identifying the impact of supermarket business practices on people on the ground. This year, four additional companies (Lidl, Aldi North, Sainsbury’s, and Morrisons, following Aldi South, Tesco, Jumbo and Ahold Delhaize) have committed to undertaking HRIAs focused on women, workers and farmers.

Others are getting closer. Amazon, the owner of Whole Foods, has committed to an HRIA in 2020 although as yet without enough detail about how and in which supply chains these will be carried out. Nevertheless, half of the companies on the scorecard will now publish HRIAs in the next two years.

FROM COMMITMENT TO ACTION

There remain significant gaps between company commitments and their actions to implement them.

Of the six supermarkets publicly committed to helping small-scale farmers organise collectively – something which can even out the inequalities these farmers’ face negotiating with large suppliers – only one, Rewe, could point to three examples where they follow through with specific projects to strengthen farmer co-operatives.

And only Sainsbury’s has even recognised that farmers need to receive a fair share of value for their products. While many supermarkets acknowledge a general responsibility to support small-scale farmers, they need to translate that into real action for a fair deal for farmers.

After a disappointing record on women’s rights previously, this year’s scorecard is more positive. Tesco, Lidl and Morrisons have particularly improved their gender-specific policies, with all three meeting Sainsbury’s commitment to track the number of women and men in key supply chains.

But these are again only initial steps and only from a few companies. The systemic problems women face in all workplaces are only exacerbated by the inequalities in supermarket supply chains and sadly, not enough is being done in response.

The women who are the backbone of food supply chains deserve companies’ attention and when 10 companies score 10% or less on women’s rights in the scorecard, the status quo is just not enough.

WHERE NEXT FOR SUPERMARKETS?

A year on, we have seen some improvements on these specific measures. Joining Tesco, Rewe, Lidl, Morrisons and Sainsbury’s now recognise that legal minimum wages are almost never enough for workers to meet basic living costs and have committed to publish living wage benchmarks: the first step to meaningful action on in-work poverty.

It is also promising to see German (Lidl, Rewe, Aldi North and Aldi South) and Dutch supermarkets (Albert Heijn, Jumbo, PLUS) each making living wage commitments in national level initiatives. We call on more companies to join this group and take specific action to address the inadequate pay for food workers.

On supply chain transparency, Lidl, Morrisons and Albert Heijn (an Ahold Delhaize subsidiary) have begun to publish key information about their first-tier suppliers. We hope to see Ahold Delhaize, and the other 13 supermarkets step up and match these efforts: disclosing the links between suppliers and supermarkets is crucial to effectively monitoring supply chain conditions.

Other areas remain sadly stagnant. No new supermarkets have committed to combatting unfair trading practices in their food supply chains. The Coronavirus crisis has highlighted the need for buyers to act fairly, meeting order commitments to suppliers and making prompt payments.

And as already highlighted, there has been little progress on the specific challenges faced by women food-workers who are likely to be disproportionately affected by the Coronavirus fallout.

During this pandemic, there is all the more need for supermarkets to strengthen their supply chains by protecting the people who produce our food. While the progress made by some supermarkets shows companies are willing to change some of the ways they do business, these changes are just first steps toward ending the human suffering behind our food.

Where companies continue to rely on business models which entrench inequalities, Oxfam will keep challenging them to go further to meet their obligations to people at the heart of their production lines.

Photo: Pedro (not his real name), 29 years old, wears protective clothing and equipment used for pesticide application at the fruit exporting company where he works on the plantation in Brazil. Pedro gave an anonymous testimony about the working conditions in the company. Credit: Tatiana Cardeal / Oxfam 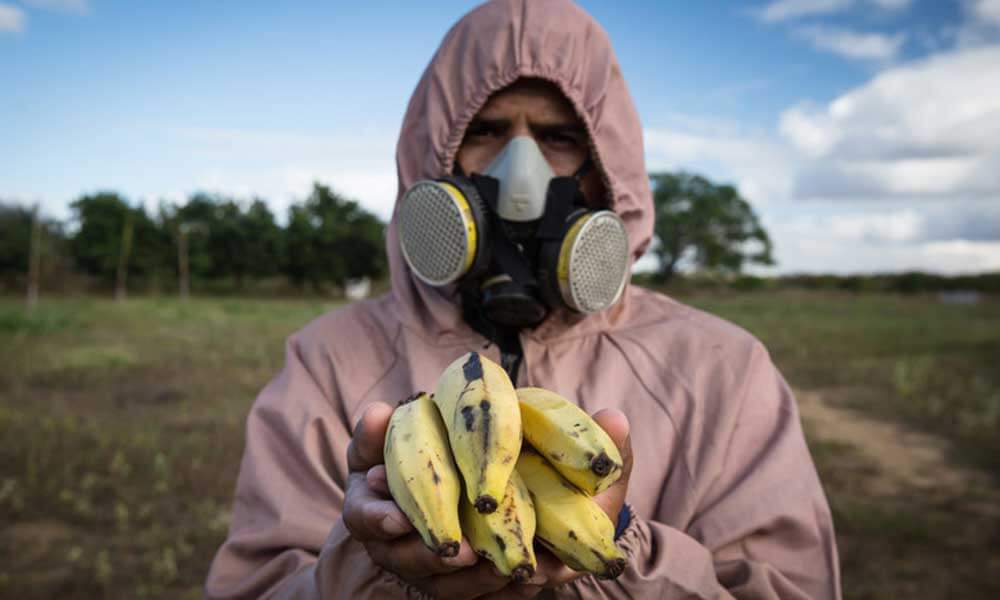