“What’s the difference between all these fair trade labels?”

The Fair World Project has published a report – International Guide to Fair Trade Labels – which provides in-depth analysis of the main fair trade labels in the global marketplace as well as outlines current trends in ethical labeling and the fair trade movement.

We reproduce below a blog item from the Fair World Project explaining what the report is all about.

“What’s the difference between all these fair trade labels?” It’s a question we get a lot at Fair World Project. And now there’s an updated set of resources to help answer that question, thanks to a global coalition of academics and fair trade organizations. The updated International Guide to Fair Trade Labels provides in-depth analysis of the main fair trade labels in the global marketplace as well as outlines current trends in ethical labeling and the fair trade movement.

This new edition of the International Guide to Fair Trade Labels comes at a pivotal moment for the global fair trade movement. Never has the term “fair trade” been more widely used. Yet it has also never been so widely misused by everyone from the U.S. President to corporate marketers. Last fall, the global movement launched the Fair Trade Charter, articulating fair trade values within the context of a world with deepening global inequality and recommitting not just to fairer supply chains but to a vision for sustainable, local development around the globe. And at the same time, more of the Big Food companies have launched their own labels, branding their own corporate social responsibility plans with labels that are light on transparency but heavy on marketing. The global focus of the guide also highlights the ways in which a “fair trade” label in a domestic context means something very different in the U.S. than it does in countries like France or India.

NOT ALL FAIR TRADE LABELS ARE CREATED EQUAL

The International Guide‘s analysis is rooted in the principles of fair trade and the approach to trade enshrined in the Fair Trade Charter. The standards are evaluated based on how well they meet the following objectives, grounded in the U.N. Sustainable Development Goals (SDGs):

The Guide‘s analysis makes clear: fair trade is a movement that has agreed to some collective definitions and goals. And some of the labels that call themselves “fair” or “ethical” do not meet those standards. Unfortunately, those labels are some of the most commonly spotted on grocery store shelves here in the U.S.

The Guide distinguishes between “fair trade labels,” “voluntary sustainability programs,” and “sustainable development labels.” The first include familiar labels such as Fairtrade International, Fair Trade USA, as well as the less familiar Fair for Life, Small Producers Symbol (SPP) labels. The sustainable development standards reviewed include Rainforest Alliance – UTZ Certified’s familiar little green frog, and less familiar multi-stakeholder standards including the Better Cotton Initiative. The voluntary sustainability programs surveyed include a range of corporate-led programs that apply strictly to one company’s supply chains, including Starbuck’s C.A.F.E. Practices, Mondelez’ CocoaLife, Nestle’s CocoaPlan, and Nespresso Quality Program AAA. These corporate programs vary greatly both in requirements, methods (for example, how compliance is verified), and in transparency—some of the standards are not available for public review.

Looking at the rankings from high to low, there’s an overarching theme that is very clear: corporate-led programs get low marks (and lots of red bars) across the board. Whether it’s a fair trade label or one claiming “sustainable development,” it is abundantly clear how important it is to have the intended beneficiaries (farmers and/or workers) involved at every step of standard writing and implementation to build a strong standard that has true impact for those beneficiaries.

Often certification standards get ranked from weak to strong. But what this analysis reminds us is that the problem is not merely that a standard is weak. The problem is that a standard is not actually constructed to benefit the farmers and workers. Instead, from C.A.F.E. Practices to Fair Trade USA to Rainforest Alliance, it is more clear than ever that these corporate-led or corporate-developed labels exist to put a stamp of approval on the supply chain but not make change.

Initially, the term “fair trade” applied to products and crops grown or made in the so-called Global South and traded with the Global North. The Guide highlights the growing movement for broadening the use of the term “fair trade” and applying it to products grown and consumed domestically. What that “domestic fair trade” looks like varies greatly depending on whether you examine it from India, France, or the U.S., the three cases that get the closest examination in the Guide. In India, traditionally designated a “producing country” by fair traders and colonialists alike, farmers and artisans are developing domestic markets for their goods in dedicated fair trade shops. In France, several small-scale farmer-led initiatives are organizing to tackle low prices, price volatility, and other issues familiar to farmers the world over. They market their products using the Agri-Ethique and Biopartenaire labels.

Here in the U.S., most of what is grown domestically and labeled “fair trade” comes from supply chains that look nothing like those that French labels designate. Instead of an emphasis on small-scale farmers, the focus is more on labor protections on large-scale farms. Farmworkers most definitely need labor protections. Indeed, farmworkers in the U.S. are exempt from a number of labor protections granted other workers, including minimum wage and overtime laws, freedom of association and organizing protections, and child labor laws.

Large-scale, plantation-style agriculture in the U.S. has direct roots in slavery and the colonial modes of farming that rely on free and/or very cheap exploited labor. By focusing on the hired labor on these farms, “fair trade” labels for products in the U.S. have taken the side of the very plantation owners and colonial powers that small-scale farmers globally have organized to combat.

In a recent example of this, instead of casting their lot (and their label) with the small-scale dairy farmers who are struggling against increased consolidation in the industry, Fair Trade USA has teamed up with Chobani to pilot a dairy standard focused on farmworkers—a development of which the workers themselves have expressed skepticism. Fair Trade USA’s label also lifts up the produce grown on massive, mechanized indoor farms in Arizona marketed under names like Wholesum Harvest—not the food grown by small-scale farmers who have struggled to hold onto their land and access markets.

There are labels in the U.S. market that come a little closer to a fair trade vision of shifting the balance of power in supply chains, such as Agricultural Justice Project’s “Food Justice Certified” label. There are also a variety of standards that focus specifically on labor justice for workers which, accurately, avoid using the term “fair trade” to describe what they do. Instead, EFI’s “Responsibly Grown, Farmworker Assured” label and the Coalition of Immokalee Workers’ “Fair Food Program” focus on worker education, organizing, and enforcement of labor rights. Their models differ, but both include worker organizations at the front and center of their standard-setting and enforcement mechanisms, making them much better equipped to support workers than Fair Trade USA, the most prevalent “fair trade” label in the U.S. domestic market, which has no worker representative spots on their board or advisory committee.

FAIR TRADE FASHION IN THE SPOTLIGHT

This edition of the International Guide to Fair Trade Labels also includes a section highlighting the two certifications that currently offer a fair trade label for fashion and home goods, Fairtrade International and Fair Trade USA.

Before continuing, it is relevant to note that small-scale fair trade artisans have been making jewelry, handicrafts, fashion accessories, and clothing since the very beginning of the fair trade movement. In fact, these makers, often women, are one of the origins of fair trade as a solidarity partnership, with their goods sold by faith groups that now make up Ten Thousand Villages and SERRV shops. These artisan-made goods have historically not carried a certification label. Instead, they have been traded by mission-driven small businesses and solidarity enterprises, including the initiatives mentioned above, and countless small businesses such as the ones who, in the U.S., make up the Fair Trade Federation. Today, some fair trade artisan groups have aligned themselves with the World Fair Trade Organization and their Guarantee System, which is a better model for their small-scale production and mission-centered model.

The supply chains that are getting certified by Fairtrade International and Fair Trade USA are not those of small-scale artisans. Instead, their focus is on factory production. Fair trade certification of any kind for apparel manufacturing has met with considerable opposition from labor rights and anti-sweatshop advocates over the years, citing concerns about the viability of an annual inspection to adequately protect workers, and the difficulties of tracking responsibility through long, complex supply chains.

Fairtrade International and Fair Trade USA take vastly different approaches to certifying fair trade fashion. The Guide offers a side-by-side comparison of the two standards. In order for a product to qualify for its fair trade label, Fairtrade International has requirements from field to factory. Fair Trade USA’s standard on the other hand, only has requirements for the final cut-and-sew stage. The standards also differ vastly in terms of requirements for living wages, freedom of association, overtime, and other worker protections. They also have very different requirements for transparency in labeling, as detailed in the guide. This is a key point, and one that is already showing up in the marketplace as big mainstream brands use Fair Trade USA’s certification to “fairwash” their production.

WHO BENEFITS: CORPORATIONS OR FARMERS AND WORKERS?

More than two decades into the existence of fair trade labeling, there are an abundance of labels on supermarket shelves. Many articles on certification open with a question or a statement about “labeling fatigue,” how so many of us are overwhelmed or confused by all the certifications and labels out there. But the reality is, this confusion isn’t an accident. It’s in the best interest of the many corporate marketers who create new labels and new ad campaigns to keep people confused. Many of the new labels that exist come on the market because corporations want a lower standard to meet (see Mondelez’ CocoaLife, which doesn’t include minimum prices for struggling cocoa farmers), or because those committed to strong standards are frustrated by corporate dilution and want a label that better represents their values (see the Small Producers Symbol, the only certification owned and controlled by small-scale farmers).

The new International Guide to Fair Trade Labels offers both deep analysis and clear rankings to allow buyers to understand what each certification means—and use that information to guide institutional purchasing decisions. As part of the release of the Guide, Fair World Project also has an updated copy of the “Reference Guide to Fair Trade and Labor Justice Programs” available. This handy one-page guide explains the main focus of each label as well as assigning letter grades to each standard on key criteria based on the Guide‘s analysis. 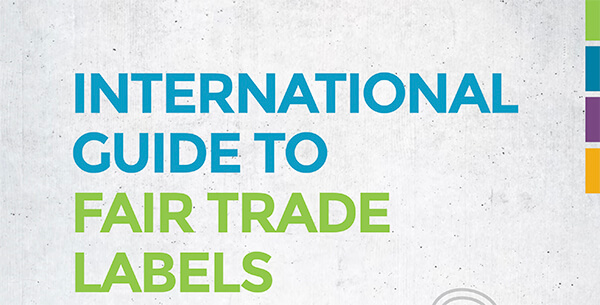