Following a campaign launched in 2016, members of the executive committee of the SITETSA union in Peru have won their legal battle against unfair dismissal by Peruvian agribusiness, TALSA.

The Labour Court in the provincial capital Trujillo, Peru, ruled last year that the union executives had been dismissed unfairly, and that TALSA reinstate the workers. This latest judgement made last week, comes in response to an appeal by the company against that ruling. The Labour Court dismissed TALSA’s appeal, ruling that the company reinstate within five days the workers: Santos Celestina Carranza Ruiz, Francisco Mamerto Sánchez Luján, Francisco Esperanza Amaranto Alvarado, Nelson Jhoel Sifuentes Sánchez.

The original dismissal of these workers in 2016 had occurred at a time when negotiations should have begun to renew the collective bargaining agreement between the company and the union. The company accused them of criminal and labour rights offences which were always rejected by the workers. Union members maintained that the company had criminalised trade union activities in order to destroy the union organisation and stop it from defending workers’ rights.

TALSA had attempted to deny the legal existence, not only of the union committee, but also of the FENTRAIR federation (Federacion Nacional De Trabajadores Del Sector Agrario, Industria, Riego y Similares Del Peru) to which SITETSA belonged. After more than three years of court trials, public mobilisations and a failed mediation process, the workers have finally succeeded in winning a return to work. The Court also ruled that TALSA must pay the union members the wages due since the illegal dismissal in 2016. Five other board members had already negotiated individual severance pay with TALSA.

International support from trade unions and civil society organisations in Europe, North America and Latin America, and the Make Fruit Fair campaign played an important role in publicising the plight of the sacked workers, and supporting the workers in their fight, including contributions towards their legal costs. 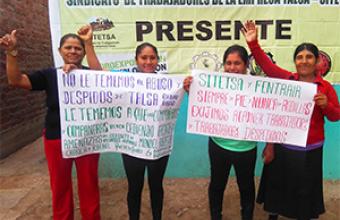