TR4: the day after tomorrow

With Latin America frenetic over the arrival of the banana killing fungal disease TR4, FruiTrop explains how we can finally see a sign, or even an opportunity, to put an end to six decades of ultra-intensive cropping based on a single variety.

What if the arrival of TR4 fusarium wilt in Colombia was a blessing? The banana world as a whole might choke on those words. The trauma of the announcement of its discovery in north-east Colombia is so acute, throughout the export banana world, that the slightest word of provocation can lead directly to the gallows. The outbreak of an incura- ble disease, the symptoms of which only appear once it is already well established, and the effects of which are lethal in the short term, regard- less of the production contexts (see FruiTrop 265, September 2019, page 121, TR4 note), has led to the entire banana planted area, i.e. some 500 000 hectares, facing the threat of disappearance. And this threat is being taken remarkably seriously by growers. All the better, if this leads to introspection. All the better, if in the end we can envisage a future for the banana world different from how it is at present. Long live TR4! If it helps us finally get past this blinkered way of thinking, which can be summed up in a single word: Cavendish. The world market (approximately 20 million tonnes) is organised, formatted, consolidated, capitalised, and ultimately, stuck. The Cavendish banana and all its avatar clones (Valery, Grande naine, Petite naine, Williams, etc.) are a perfect match for the needs of what is known as a commoditised market. Commoditisation refers to the process by which a product becomes so commonplace that it practically ends up being a commodity. High volumes and low prices are what characterise this type of market. The banana is listed just like the barrel of oil or the dollar. It is a single product, and therefore commercially fluid. The banana can go from hand to hand, crossing seas and borders; and its pedigree remains the same worldwide. True, the industry is not completely free from segmentation, yet this is only a fairly recent phenomenon, involving only production modes (organic), social and/ or environmental labelling (Fairtrade, Rain Forest Alliance, etc.), sizes (fingers or bunches), stages of maturity or finally brand marketing. Also, Cavendish is always synonymous with high yields and profitability for the most efficient growers. You know what you are getting: a marketable yield of 50, 60 tonnes per hectare, and sometimes even much higher. Yet it is hard to imagine what you are going to encounter commercially speaking. No other commercial variety of the genus Musa offers this level of productivity.

And what volumes there are of small banana varieties (freycinette) or red banana varieties do nothing to invalidate this observation. It is a unique example in the world of the main fresh fruits and vegetables. Even the kiwi or pineapple have been based for years now on a wider varietal range. Furthermore, varietal commoditisation is a very long-stand- ing phenomenon, and indeed representative of this world market. Exports began in the early 19th Century from Cuba to New Orleans with the Gros Michel variety (Gros Michel sub- group, very similar to the Cavendish sub-group). It was not until the 1950s that a multinational (Standard Fruit Company) launched the first Giant Cavendish trials (see FruiTrop Focus Banana, January 2017, page 188), already under pressure from fusarium wilt race 1. The world market underwent a swift and radical overhaul, going from Gros Michel to Cavendish in record time. Six decades later, the principles of intensive monoculture based on Cavendish are the absolute rule on which the international market is based. Except that, as in the case of Gros Michel, Cavendish is ultra-sensitive to fusarium wilt race 4. So yes, the arrival of TR4 in Colombia does open up some opportunities, for at least three reasons. TR4: a unique opportunity for a varietal change

Firstly, varietal change is the one and only way to effectively combat the damage caused by the fungus. The use in the Philippines of mutant Cavendish (a GCTCV-218 or Formosana clone), or the hopes placed in the selection of tolerant clones (e.g. the Ruby variety, a selection of Grande naine) by the VITROPIC vitroculture laboratory, are among the current R&D avenues. Varietal enhancement by conventional cross-breeding or by using NBTs is opening up prospects, but in the medium or even long term. The diversity of the genus Musa is also immense, as is shown in summary form by the descriptive table. The Holy Grail for the research world is a “Cavendish like”, with a view to the needs of the market. Yet we should not forget to delve into the huge worldwide genetic heritage of the banana. In any event, we need to shift the paradigm of an industry built on a single standard. Cropping systems, packaging techniques, logistics, the ripening process, etc., are standardised for Cavendish alone. Daring to change variety would call into question decades of knowledge and habits. The market abhors technological breakthroughs, unless forced on by regulations, technical immobilisation, diseases or demand. The expansion of the TR4 disease provides grounds to believe that diversification is the necessary way forward.

Environmental and social: we can do so much better

The second reason pushing for change is due to the very often damaging effects – or adverse externalities – of export dessert banana production. The biosystems are completely unbalanced – and the proof is overwhelming. The model is not at all sustainable, neither for the environment, nor for the people working there, nor for local residents. So it is high time to adopt breakthrough modes of production. This is the third avenue based on the principles of agroecology1-2, one of the major components of which, though not the only one, must be varietal change.

While TR4 is on everyone’s mind, the fight against black sigatoka, weevils, nematodes and also post-harvest dis- eases requires the use of chemicals, which have adverse effects on the environment and people, or even dramatic ones in certain contexts. We need to find resistance or at least genetic traits of tolerance within the worldwide banana diaspora, create through conventional hybridisation or genome editing – it can only be helpful – alongside agronomic techniques (management based on warnings, trapping, fallowing, manual defoliation, biological discontinuity, use of biocontrols, etc.), so as to considerably scale back use of synthetic pesticides. The road will be long and uncertain, but the stakes are worth the investment.

Finally, and this will be of interest to the value chain, it is high time to stop the slaughter of value. How is it that a fresh food, so nutritionally beneficial, handy, which travels thousands of kilometres and is treated with such care throughout the chain, is so poorly valued? Of course, we know the answer. It is partly due to the fact that, in this sector, when it comes to price reductions, anything is possible at any time. The banana is the fresh product capturing the most consumers in-store. According to the Kantar France panel, it generates, for example, one-and-a-half times more traffic, i.e. store visits, than the apple, the second biggest star of the fruits and vegetables section. In other words, the banana is used as a hostage to sell more detergent, TVs or chocolate bars.

Except that, if we take a closer look, the current distribution model, based in large part on sheer volumes, is running out of steam. True, there is a large part of the population that needs to manage on a shoestring budget (11 % of French households state that they are struggling to get by), yet there is also an increasingly large section of consumers in favour of a benevolent mode of consumption (albeit this is a vast concept). Of the households surveyed by Kantar, 74 % said they were prepared to pay more for high-quality products. The distribution sector is trying to find an alternative, primarily through organic, yet this avenue is leading into a blind alley. Firstly, there is a high risk of scandal due to the potential for fraud (see FruiTrop 263, May 2019, page 10). Secondly, we can see that the much trumpeted bonus added value for this segment declines very rapidly as volumes progress, falling victim to commoditisation. So the most obvious way out seems to be varietal segmentation, a source of value creation in other industries.

So that is why the outbreak of TR4 in the main export dessert banana production region can be seen as an opportunity. Operators of all kinds must make sure not to mess up their date with history, by investing in varietal diversification of the supply, so as to transform this threat into an opportunity to combat the disease, speed up the transition of the agricultural systems and restore added value to the product. 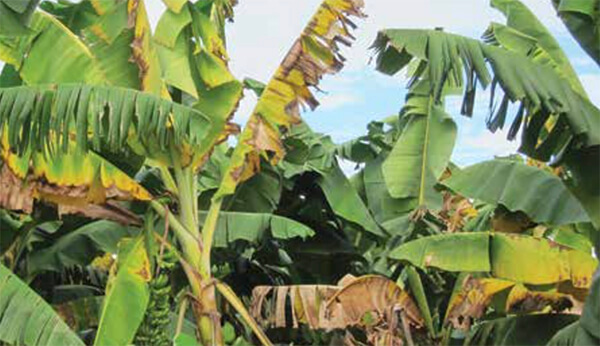