One year ago, Oxfam launched its international campaign to tackle the human suffering faced by the women and men that produce our food – with a call to action for both supermarkets and governments to acknowledge this problem and act to address it. The last year has shown that progress is possible through companies strengthening policies and practices on human rights in food supply chains and governments strengthening policy frameworks or regulations.

However, new evidence published today by Oxfam shows that workers’ rights continue to be violated across all continents, including in Europe itself.

Interviews with pineapple, banana and horticultural workers in Costa Rica, Ecuador and Peru conducted by Banana Link’s partner trade unions confirm that most workers do not earn living wage and over two thirds fear the consequences of joining an independent trade union. More than half of workers report not being treated with respect at work – or experiencing abusive treatment or harassment in the workplace – yet were not confident that they could raise a concern or grievance without problems.

‘There is a clear and direct link between workers earning poverty wages and not being protected from harm at work, and their freedom to join a union and collectively bargain for better working conditions. Supermarkets need to ensure that they only buy from plantations that respect the rights of their workers to organise.’ Jacqui Mackay, National Coordinator, Banana Link

Although some retailers continue to make good progress – Oxfam cites Tesco, Sainsbury’s and Morrisons in particular – many have barely started the journey towards real corporate responsibility.

In 2018, Aldi South scored just 1% on Oxfam’s Supermarkets Scorecard. After public campaigning in multiple countries, the German-headquartered retailer published its first international human rights policy, committed to respect human rights, and adopted measures to identify risks and prevent harm to people. These statements, among others, increased the company’s score by 18%, more than any other company. It has also joined the Ethical Trading Initiative in the UK which helps companies address workers’ rights issues.

However, Aldi’s sourcing of bananas demonstrates a disconnect between the company’s human rights commitments and its business practices. Around the time it was developing its human rights policy, the company told banana suppliers they had to cut prices, even though prices had already fallen by 50% in 15 years. In response, over 40 producer organisations across all the major banana exporting countries said enough was enough and urged other retailers not to follow Aldi South’s lead. This did not stop Aldi going ahead with a lower price for its global banana supply this year. It remains to be seen whether the lessons have been learned when it comes to negotiating banana prices for the 2020 contract.

As members of the Costa Rican banana and pineapple workers’ union SITRAP told Oxfam last November, “We banana workers are very worried because day by day our working conditions get more difficult. Right now, we are negotiating a collective bargaining agreement, but when we asked for a wage rise the company refused point-blank, arguing that they are selling bananas for a very low price and that means they are not able to increase our wages”.

One year on, as well as well as publishing an updated supermarket scorecard and new case studies from India and Brazil, highlights how the retailers’ relentless drive to cut costs and maximise profits, is fuelling poverty and abuse in their supply chains.

As the worst performing supermarket out of the six in their survey, Oxfam are asking discount retailer Lidl to do more to protect the people who produce our food. Oxfam say that Lidl does not have sufficient public policies on human rights, and that their distinct lack of transparency is worrying.

Lidl need to be clear about their policies to protect supply chain workers from abuse, inhumane working conditions, and being trapped in poverty.
But they’re not.
Lidl says it’s ‘Big on quality’. While that might be the case, they’re not so ‘Big on’ protecting the workers who produce our food.

You can support their campaign by signing the Oxfam petition calling on Lidl to do better here. 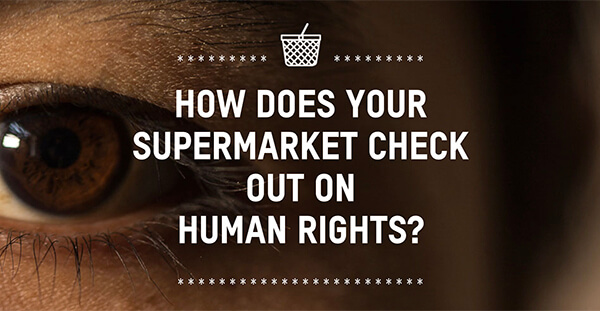