Netherlands based AgroFair is a pioneer in sustainable banana production, being the company that launched the first Fairtrade banana in 1996. Their organic (EkoOké) and Fairtrade (Oké) bananas are grown mainly by small holder associations and cooperatives.

We reproduce below a story from Agrofair on work they have done to support the APROVAG small producer’s association in Senegal to improve the sustainability of their production methods and their access to the market for their bananas.

While being only one small example, their’s is a story we would like to see more of in terms of supporting small-scale socially responsible cooperative production, whether for export markets, or in this case, local markets. Senegal is a country in West-Africa with a population of about 16 million people. The capital is Dakar (1 million inhabitants). The country has warm desert, warm semi-arid and tropical savanna climates, suitable for the production of organic bananas. Two big rivers cross the country: the Senegal and Gambia rivers. Dessert bananas are in high demand in Dakar and other cities. Local production takes place mainly in the region of Tambacounda, 500 km away from the capital Dakar, on the borders of the Gambia river, which is used as source for irrigation. The demand on the domestic market is bigger than the local supply, so every week bananas are imported, mostly from Côte d’Ivoire. These bananas are second-grade from export plantations, but in general, quality is a bit better than locally produced bananas from Tambacounda.

The APROVAG producer association unites 11 producer groups, totaling 726 small farmers (of which more than one third are women) producing bananas on the banks of the Gambia river on small plots of 0,25 ha on average (totaling 150 ha approximately), with a total annual volume of between 2.500 and 3.000 tons. Farmers irrigate their banana plants with hoses manually, as if it were a garden. This way, in the dry season, adequate irrigation costs 4-5 hours a day. In practice, this does not happen. As result, the plantations show strong seasonal fluctuations in productivity. In the dry season (February – July) very low harvests; during the rainy season and several months after (August – January) better yields. (See graph). With good irrigation, acceptable year round production could be achieved, with a substantial growth of yields and gross income for the producers. A second challenge is the low quality of the fruit. In order to compete with imported bananas from Côte d’Ivoire (harvested from commercial plantations for export to France and the UK), APROVAG has to produce bananas with export quality to get a better price. This means the need for improvement of agronomic practices and bunch care; and adequate handling and packing.

A third challenge (perhaps the biggest) is that APROVAG only controls the sales of the packed bananas, which is just a small percentage of the total turnover. The mayor part of the bananas is not washed and packed, but is sold as bulk bananas, in bunches, to middlemen who enter the plantations each week and who are well connected to wholesalers or retailers in the urban centers. In order to become a strong business, APROVAG has to compete with these middlemen. Up to date, APROVAG has not succeeded in taking over this sales network of bulk bananas, which still represents more than 90% of the sales, worth € 900.000 approximately.

AgroFair Projects partnered with Belgian NGO Rikolto (with an office in Dakar) since 2012, to supply its knowledge of sustainable banana production, logistics and the small producer organizations. Thanks to funding provided kindly by the World Bank, and later (thanks to the efforts of AgroFair), by the Rabobank Foundation, the African Enterprise Challenge Fund (AECF) and the Dutch Initiative for Sustainable Trade (IDH), investments could be made in technical assistance and hardware. Hundreds of farmers could be trained in modern production techniques. With AECF, investments were made in a modern sprinkler irrigation system in one producer group, pumps, cableways, packing stations, a tractor, trailer and compost turner.

Two professionals of APROVAG were trained in Peru, in the field and in the packing stations, where AgroFair farmers in similar condition produce bananas of high quality for the export market. Dozens of French and Wolof spoken videos were made on best practices, which could be shown to hundreds of farmers in Senegal, and were basis for the training program. In the producer group that was benefitted with the sprinkler irrigation system, better and more stable yields were achieved. Good agricultural practices were widely adopted; especially in the group benefitted with the sprinkler irrigation system. Time that otherwise was dedicated to manual irrigation could now be spent on the implementation of best practices. In addition, female producers (especially single mothers) could spend more time on their children.

With the tractor, trailer and compost turner, and the construction of a roofed site of 2.500 m2, a production capacity of 1.200 MT compost could be created, as amendment to create healthy soils, rich in organic matter. A small stock of 1.600 plastic returnable crates could be bought, to start sales trials directly with supermarkets, that demand year round supply and quality. What is lacking are cold stores in Tambacounda and Dakar to start these trials.

Find out more about Agrofair. 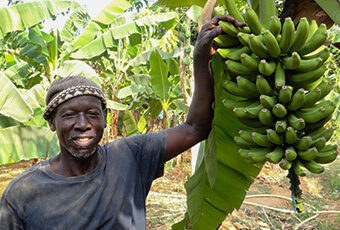