Widespread protests in Costa Rica against new taxes proposed by the government, as a condition of signing a US$1.75 billion loan agreement with the International Monetary Fund (IMF), have had a significant impact on agricultural exports. The government is seeking the loan to address a fiscal deficit that is projected to hit 9.7 percent of gross domestic product this year owing to the impact of the coronavirus

According to the Ministry of Agriculture and Livestock, the Costa Rican agricultural sector has lost more than $37 million because of the roadblocks carried out by different groups of protesters. According to the statement, banana producers have been the most affected, with losses that amount to $28,930,760, followed by pineapple producers with $7,500,000.

Costa Rica is the biggest supplier of pineapples and the second largest of bananas to the UK market. The pineapples sector alone employs about 32,000 people directly and represents around 10 per cent of the country’s total exports, making it the country’s main agricultural export.

According to the Government, the blockades also affect the production shifts of these companies, which work 24 hours a day, because they have impacted the travel routes of their personnel, specifically those located in the Western region.

The companies affected claim they’ve had losses due to the interruption of operations at their farms and because they’ve had to destroy the production that couldn’t be taken out of the farms in time. Additionally, they indicated, there had been a loss of employment in the national agricultural sector.

The roadblocks have been organised by the National Rescue Movement (NRM) to pressure the government to desist from its proposed negotiation with the IMF. They are opposed to any plans by the government to meet the deficit through increased indirect taxes on the population or the sale of government assets.

Although the Costa Rican President, Carlos Alvarado, withdrew the proposal to the IMF on Sunday 4 October, and called for a national dialogue with political, business, trade union and academic sectors on a potential economic solution, the protests are continuing.

With the intermediation of the Archbishop of San José, José Rafael Quirós Quirós, the representatives of the NRM, have given the government their list of requests on which they will enter dialogue, mediated by the Catholic Church, and lift the blockades.

The National Association of Public and Private Employees (La Asociación Nacional de Empleados Públicos y Privados (ANEP)) has played a leading role in the protests, argues for the collection of unpaid or evaded taxes which amount to between 6 and 8% of GDP, and is also calling for the imposition of a “Tobin” tax on financial transactions, as explained in this interview with ANEP General, Albino Vargas [In Spanish]

The president of the National Association of Educators and Educators (ANDE), Gilberto Cascante Montero, spoke in front of the Plaza de la Democracia during the mobilisation on Tuesday 6 in protest of the fiscal policies of the Carlos Alvarado government.

The leader expressed the total rejection of the organised labor movement, before the new fiscal package that will fall on the working class. 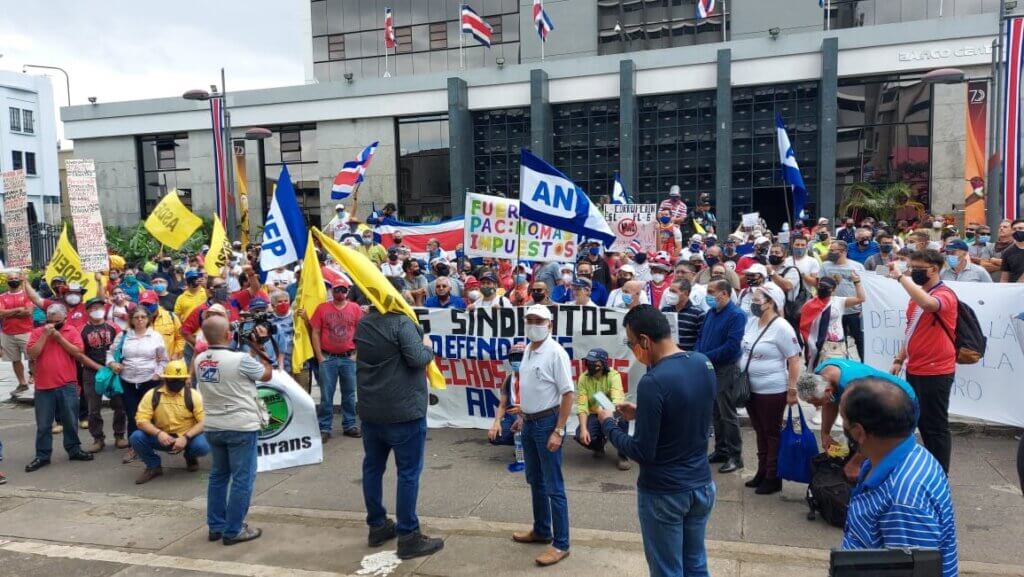