Following the letter that was sent recently to European supermarkets raising concerns about the impact of a reduction in the purchase price for bananas in 2021 by discount giant Aldi, we reproduce below a statement by the Coordinating Body of Latin American Banana and Agro-industrial Unions (COLSIBA), calling on Aldi to change course.

The ALDI supermarket chain intends to reduce once again the price it pays for a box of bananas. According to initial estimates published by Reefertrends, the contract price per banana box set by Aldi (Europe) for 2021 will fall from 12.41 euros to 11.33 euros. This reduction of over one euro per box would make the 2021 price the lowest ever.

The ALDI price is a reference price, as other buying companies in Europe look at what ALDI does and decide to do the same. Banana plantation workers are the direct victims of this price war between retailers in Europe. Given this context, COLSIBA rejects this attempted buying price cut by Aldi and others.

As plantation and packhouse workers in Latin America we now face other pandemics in our communities: poverty, lack of employment, poor job security, lack of freedom of association and collective bargaining. Additionally, we are currently suffering the effects of the CoVid 19 pandemic, which comes on top of these other scourges.

In their “Corporate Social Responsibility” messaging, supermarkets talk about wanting to ensure compliance with human and labour rights, living wages, decent work, gender equity, occupational health, etc. But through their banana price wars, these same companies violate their ethical aspirations in commercial practice. COLSIBA believes that the time has come to put a stop to this double-speak.

More than 70% of the bananas consumed in Europe come from three Latin American countries: Ecuador, Costa Rica and Colombia. The independent trade unions grouped in the Latin American Coordination Body of Banana and Agro-industrial Unions (COLSIBA) – from Guatemala to Peru – call on Aldi and other supermarket chains to change course.

“We condemn Aldi’s decision, as those most affected will be thousands of workers in the plantations and packhouses”. Didier Leitón, General Secretary of the SITRAP union in Costa Rica, said, “There would be lay-offs, loss of acquired rights, loss of social benefits, more unemployment, more poverty, more delinquency, more deterioration in the quality of life. In short: more impoverished countries“.

For Adela Torres, general secretary of the National Union of Agricultural Industry Workers (SINTRAINAGRO) in Colombia: “This decision by Aldi, taken in the midst of the Covid-19 pandemic and the hurricanes, ETA and IOTA, which affect the fruit-producing countries, would generate a human catastrophe that would affect women in particular. Tens of thousands of plantation households depend on female income earners and family dependents. Women’s rights are more violated than those of our male colleagues“.

Andrés Medina, General Secretary of the National Federation of United Banana Workers of Ecuador (SINUTRABE), demands that Aldi: “Reverse this terrible decision. If the people at Aldi and the other buying companies in Britain, in Germany, in the Netherlands, in France, in Russia lived – in their own flesh – the results of their very tangible decisions in the lives of our people, they would not act like this“.

Andrés has been a banana harvesting worker for 36 years on a farm in Los Ríos province, Ecuador; in his opinion: “Most of the working people in our country are experiencing the results of a deregulation of labour laws and today only a minority of the men and women employed in the banana industry have permanent contracts and access to health services. This should not be the case. Our governments must speak out about these supermarket price wars that have such negative consequences for our lives and our natural resources“.

As continental coordinator of COLSIBA, Gilbert Bermudez proposes a change of direction in order to provide a fair and healthy banana to consumers in Europe: “Independent workers’ unions continue to exist in all the exporting countries of Latin America, Africa and Asia, despite all the injustices we have experienced and continue to experience. The business model – with low prices that do not cover the true costs of sustainable production and with private certifications that hide the truth from the consumer – has to change. We are direct players in the banana industry, the best placed to convey the truth to companies that want to be responsible. We are the ones who have the capacity to discuss serious and shared solutions with Aldi, with Lidl, with Tesco, with whomever.

“COLSIBA and its allies on all continents have proposals and are in a position to present them directly in Europe, if necessary, to collaborate in the search for new ways of bringing this fair and sustainable banana to consumers. Call us!“.

Meanwhile, the German civil society organisation Südwind, who are among those mobilising against the price war, is supporting Colsiba’s call on European supermarkets.

“It cannot be that the price of bananas is determined by a handful of supermarket chains,” says SÜDWIND’s Pedro Morazán. “The price calculation must be made on the basis of the costs actually incurred along the value chain. The payment of a living wage is the basis for such a price calculation.“ 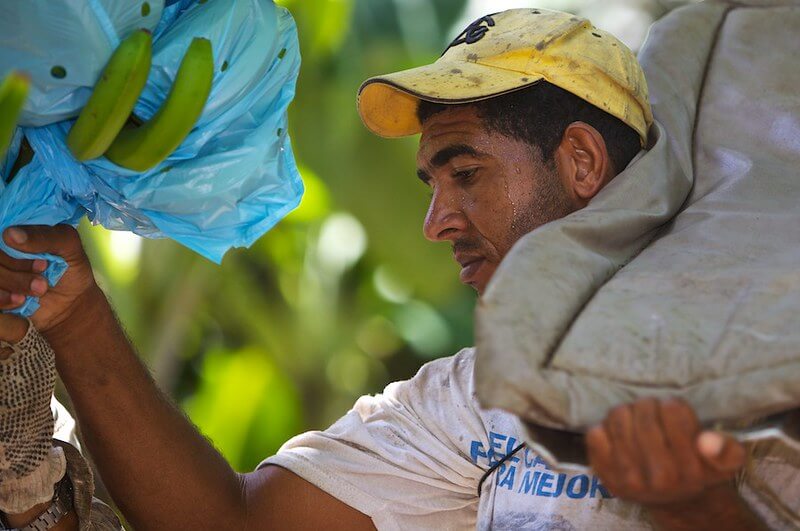