Seventy farming families with less than a hectare each in Northern Peru’s Chira Valley came together in 2017 to form Cooperativa Agroperu to produce organic fair trade bananas and other fruit, trees and food crops. They are trying to break out of the prevailing, and unsustainable, monoculture production model that even some organic growers have become trapped in. They have also sought to learn lessons from the experiences of the 20 year old industry in Piura province and stand out for their good labour relations as well as for their innovation in production methods.

We reproduce below an interview with José Correa, an organic banana farmer from Piura and co-operative member that first appeared in the newspaper Perú21.

“In Sullana we have the best banana, in terms of taste and safety,” says José Correa, an organic banana farmer from Piura.

Huancabamba is like a paradise. This is how it is defined. “All green, all beautiful,” he describes. The city is small, but for its total extension, it is among the largest provinces of Piura. It borders Ecuador, Cajamarca and Lambayeque. “It has the climates of the coast, the mountains and the jungle“, he says about the land where he was born, an hour’s walk from one of the Huaringas lakes.

Six hours away by truck is El Cucho, in Sullana, on the coast of Piura. It has about a thousand houses and is where José Correa Cruz now lives and where he grows organic bananas for export. This fruit has improved the economy of several citizens in the north of the country.

His father was a cattleman and farmer, and in 1994 they migrated. They sold everything and left behind the potato, oca, olluco and barley crops in Huancabamba. José was 17 years old. “Our parents always encouraged us to work,” the farmer with more than 20 years of experience in bananas explained on the phone.

In June he had planned to travel to Germany, but because of the pandemic it was not possible. Today he wants to export without intermediaries, study international business and let the bananas take him far away.

How far does the Piura banana go?

“The bananas from Piura reaches Europe, the United States and Asia”.

Is it one of the most sought-after?

“In Europe and the United States, the Peruvian banana is the most expensive, the most sought-after“.

If we were to draw up a table of banana production positions in the world, what place does it occupy?

“In terms of quality, we are first. And in terms of quantity, those who are first are Ecuador and Costa Rica. If they export 10, we export 3 to 4“.

What is so special about it?

“It is organic, sweet and cultivated by small producers“.

What is the difference between bananas and plantains?

“Bananas have a different taste. In their genetic characteristics, bananas are AAA and bananas ABB or AAB. Bananas are fresh edible. Bananas are not so much, they are more astringent“.

How have you fared with the banana in the pandemic?

“Production has fallen by 30%, but may start to rise in January“.

Bananas were perhaps at their best before the pandemic?

“Yes, of course, until April“.

How did you go about producing bananas?

“I am the son of a small producer. In 2007 I was in Pronatur (an export company), in 2010 I returned to an organisation in the valley, and since 2017 we have had a ‘small business’ with our partners called Agroperú Chira, where we have been working with small farmers, supporting them with fertilisation and training, and we are already looking at the commercial side of things for 2021“.

Why did your family migrate from Huancabamba to Sullana?

“To seek development. What you sowed was for food. Also because at that time there were problems with terrorism. And we wanted education for the family“.

Why did your father choose to devote himself to bananas?

“We were looking for plots of land and we found the banana. Previously we had sold everything we had in Huancabamba, where we had about 20 hectares, mostly for cattle. With that money we bought a house in Sullana and the plots. I was helping him and studying to be an agricultural technician“.

How much has your life changed?

“Agroperú Chira groups 96 producers. We are just beginning. But bananas have changed the economic landscape a lot since 2000. Up until then, most producers walked around in their rubber sandals. Most came down with their donkey and their house was made of rustic material. Today they have a house made of noble material, a cart, and they walk on their shoes. The social issue has improved. Young people coming out of secondary school are studying at university, there are more resources“.

You tell me that you fertilise with organic products. How does this translate into the final product?

“Because the banana is sweeter. It has more consistency. It does not ripen as fast or ripen evenly. And we do waste analysis to see the credibility of the product“.

Would you say that the banana produced in Sullana is the best that Peru has to offer?

“In Sullana we have the best banana, in terms of taste and safety. The latter refers to the fact that it is free of non-allowed products or chemical products“.

What do they need to grow more?

“We lack a market. We also need economic support, because the issue of certification alone costs us about 18,000 dollars a year. What we are seeing is also training, we need infrastructure to improve. We need to improve the attributes of the land, but with organic products, which we are currently applying in small quantities“.

What is the most important thing for having a good product?

How do we recognise a good banana tree?

“You can tell by its aesthetic quality, when it has a good dimension, good size and consistency. The fruit does not bruise too quickly“.

Is the banana you produce sold more abroad or in Peru?

“We sell it more abroad. Although it depends on the weather. We’re taking it to the supermarkets in Lima right now, they’re paying quite well. The thing is that in Peru we distribute what we call the ‘export discard’. The best goes abroad“.

“The goal now is to achieve a direct market. We have an international alliance with organisations in Ecuador, the Philippines and France. We are doing a market study to see in which niches we can offer our product. The dream is to export directly“. 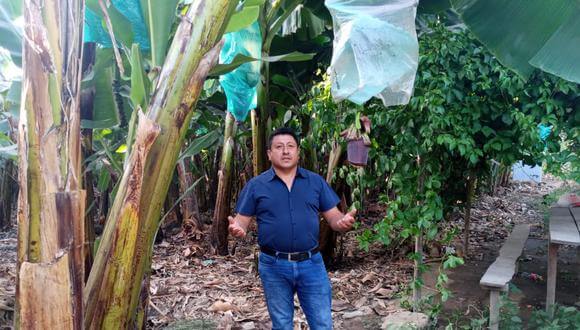