Talks between trade unions representing agricultural workers and the government that begun in Peru this week to discuss the implementation of a new Agrarian law, approved by Parliament last week, have stalled as unions withdraw over dismissals of workers.

Following five days of demonstrations and roadblocks led by farmworkers across the country in December last year, the Peruvian government announced that it was revoking the law that exempted the agricultural sector from the same labour rights protections as workers in other industries, and enabled the exploitation of workers by agri-business firms.

A multi-party commission was subsequently appointed to draft the text of a replacement law, but trade unions rejected the proposed new law as it did not address union demands for better wages and collective bargaining rights. Unions vowed to continue the protests as the proposed new replacement law offered only a pay bonus to agricultural workers.

And although talks between unions and government began in Lima this week to address these issues, unions have now withdrawn due to dismissals of workers in the agricultural sector.

Juan Herrera, secretary general of Frentrair (National Federation of Workers of the Agrarian, Industry, Irrigation and Similar Sector) alleged the dismissals were in retaliation to union demands, saying “They are making them resign under the pretext of signing a new contract with the new framework of the law that still has no regulations. We cannot continue sitting at a table when workers are abused outside in companies“. Photo: Juan Herrera speaks to the press following the union withdrawal from talks

The president of the Front of Agrarian Workers of the Ica region, Julio Carbajal, said that his union will attend the dialogue but will continue to protest with a brief blockade of the Pan-American highway and a march to the city of Ica, the regional capital.

“It will be a peaceful mobilisation to give strength to the workers,” the leader told the daily La República, adding that the law must be modified or replaced to grant fair wages and a better share of the profits of the very prosperous agro-industrial companies.

Meanwhile, the general secretary of the General Confederation of Workers of Peru, Gerónimo López, has called for the Minister of the Interior, José Elice, to resign due to the three deaths caused by the police repression of demonstrations in December.

Banana Link is in communication with the unions in Peru and are offering practical support to their struggle for better wages and working conditions. 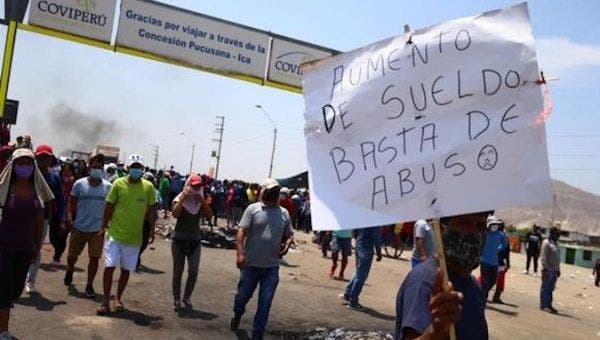