Failure to persuade Panamanian banana company Ilara Holding in the Northwestern Bocas del Toro province to introduce mechanised bunch haulage, as had been agreed with the union SITRAPBI in its 2016 collective bargaining agreement, led to a short strike earlier this month. Some 1400 workers on five plantations paralysed operations after exhausting the grievance procedures, set out in legislation, in their attempt to get the company to implement what had been previously agreed.
Workers said that manual hauling of dozens of bunches was seriously affecting their health as the weight and the distance they had to haul fruit were too great.
“SITRAPBI member, Gilberto Becker, told local radio: “The company promised to put in the machines by January last year, but we’re still hauling the heavy loads dozens of times a day. Many of us are affected by muscular problems.“
The Industrial Union of Banana Workers in Independent Banana Producers, SITRAPBI, affiliated to the regional coordinating body COLSIBA, accepted a return to work following a successful mediation by a specialised team from the Labour Ministry, MITRADEL. The company agreed to introduce mechanised haulage and to pay unpaid wages owed to workers since July 2018.
The new agreement was signed by SITRAPBI General Secretary Arcides Baker and company representatives after ten hours of negotiation and eighteen hours of strike action. The strike action was supported by sister union SITRAIBANA working in Chiquita’s own plantations in the same district as well as by port workers’ union and the Convergencia Sindical confederation.
Sources : Various Panamanian media; COLSIBA.
Photo: http://www.panama24horas.com.pa 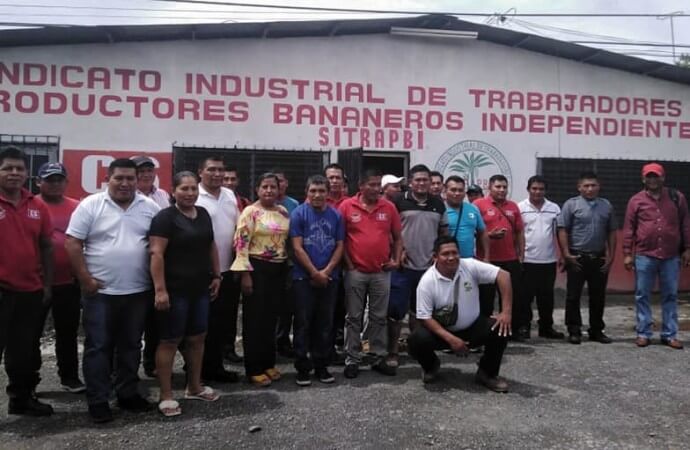