Several large German retailers have today (17 January) signed a voluntary joint agreement on the promotion of living wages and incomes in their agricultural supply chains.

Representatives of Lidl, Aldi Süd and Nord, Kaufland, Rewe, DM and Tegut signed the agreement today with the German Federal Minister of Economic Cooperation and Development Gerd Müller, at the International Green Week event in Berlin.

Tracing should be possible from the plantation to the supplier. The companies also want to see whether human rights are respected in the manufacture of their products.

According to Minister Müller, seven large German supermarket chains are now committed to living wages in their supply chains, and shows that consumer pressure is working. More and more consumers wanted to know how their food is produced. “The seven pioneering companies recognise for the first time that low incomes are a major challenge and living wages are more urgent than ever,” said Müller, who had criticised the social and financial conditions for producers in the countries of origin.

“For example, German food retailers buy a kilo of bananas for 14 cents and hopefully won’t sell them here for less than one euro,” he said. “People cannot live with these producer prices at the beginning.” Millions of children would therefore have to work in the countries for the western standard of living.

The voluntary commitment of the companies was developed within the working group of the German retail on living wages and income. The Federal Ministry for Economic Cooperation and Development (BMZ) supports this cooperation with its Initiative for Sustainable Agricultural Supply Chains (INA), which is implemented by the Deutsche Gesellschaft für internationale Zusammenarbeit (GIZ). It coordinates the working group and provides its members with its technical expertise for the implementation of the planned activities.

The action steps agreed on in the voluntary commitment include the calculation of income and wage gaps and the implementation of sustainable procurement practices together with buyers and suppliers. These measures are to be implemented in initial pilot projects by 2025.

The undersigned companies Aldi Nord, Aldi Süd, dm-drogerie markt, Kaufland, Lidl, REWE Group and Tegut agreed, among other things, on the following steps towards the realisation of living wages and incomes: 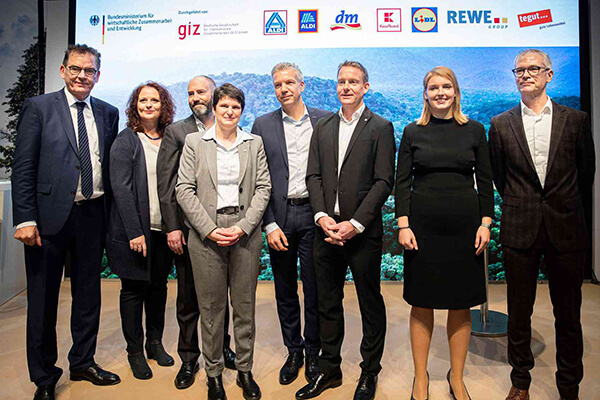