For a fair and sustainable banana trade

Despite progress in the supply chain, bananas remain a controversial product when it comes to workers’ rights, wages and support for small farmers. Fred Searle hears from Alistair Smith of Banana Link, a non-profit cooperative that advocates for a fair and sustainable banana trade

What are the main issues around exploitation and trading practices in the global banana sector?

We are concerned about a new contracting system in Ecuador which undermines workers’ job security and quality by imposing totally flexible hours and doing away with overtime rates.

In many countries there continues to be hostility to basic rights such as joining independent trade unions, especially in Costa Rica, but with a worrying trend in Ecuador too. If this right is violated, then workers have no chance of improving their conditions through proper dialogue with their employers.

The industry in Belize depends on migrant workers in poor wage and social conditions, but growers have not wanted scrutiny from third parties, so it is hard to go public with details.

In the Dominican Republic, the unions and growers have come together for the first time to try and resolve the outstanding problems of the legal status and therefore access to the healthcare system for Haitian migrant workers. We are hopeful that this will soon mean improvements on the ground for workers.

What are Banana Link, the Fairtrade Foundation and workers’ rights groups doing to tackle these issues?

In the Dominican Republic, Banana Link and the Fairtrade Foundation are supportive of the efforts by the local workers and growers. The government has raised the minimum wage, meaning that the gap between that and a living wage is somewhat smaller than before.

In Ecuador, Banana Link is supporting the new trade union federation to consolidate itself, train its members and engage with government and industry in dialogue over improvements. Fairtrade will be promoting relationships between certified plantations and unions on the ground. Fairtrade International is very active with Banana Link in the World Banana Forum to promote movement towards living wages through collective bargaining.

How is the threat of TR4 influencing the current production model?

For Banana Link, the biggest issue comes from the threat to the current production model posed by TR4. However, we believe this should be seen as the opportunity to change the commercial banana production model towards agroecological ways of producing.

We know from experience in the French Caribbean and large-scale organic growers in Africa and Latin America that it is possible, but the big players need to accept this challenge and ensure that the banana is given its real value in the process.

The low-price Cavendish needs to be seen as yesterday’s banana, not tomorrow’s.

How are European retailers responding to calls to increase banana prices and pay workers more fairly?

Both Dutch and German retailers have made collective commitments to guarantee living wages for banana workers, covering a majority of banana sales in both countries, although the Germans have yet to fix targets for achieving this.

Some UK retailers have been committed for some time, but we are hopeful that an ambitious collective commitment might be made this year.

How are banana prices evolving in the UK and what impact is this having on producers?

Retail prices have finally started creeping up in the UK with an average increase in loose prices from 77p in 2018 to 80p per kilo in 2019. That said, they are still far from giving retailers the room for manoeuvre to reward producers properly for the social and environmental investments needed, such as ensuring living wages for all.

Do you think Fairtrade certification goes far enough? How could it be improved?

We think that the higher labour standards need to be applied in small farmers’ organisations, but the market needs to support this too. The Fairtrade system cannot do this alone.

Fairtrade is a stringent, ethical label compared to say Rainforest Alliance, but growers who adopt the Fairtrade model and benefit from better guaranteed prices need to do more to invest in social and environmental changes and not just rest on their laurels.

They need to become more active in the quest to move away from monoculture, even if it is organic monoculture. This move needs proper support from the big banana buyers of the world, otherwise the smallest and most vulnerable will be pushed out of the industry, as they have been in the Windward Islands, for example.

What do you think about the emergence of in-house ethical certification systems like Sainsbury’s Fairly Traded Tea pilot?

It seems Sainsbury’s stepped back from going down the same road with bananas as they did with tea, but they have been quite closed to discussion since the Asda takeover came on their agenda.

We don’t think it’s likely a similar scheme will be introduced for fruit or veg. 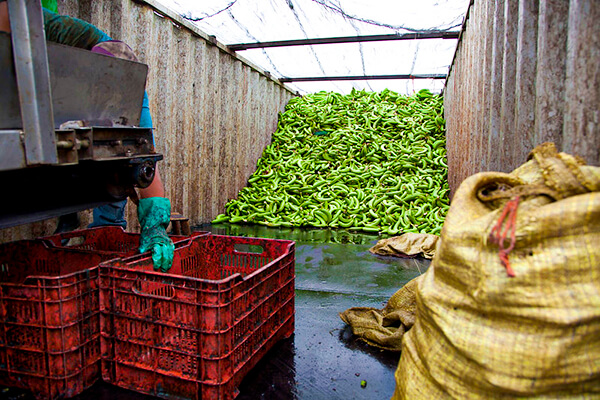