Ethical standards body, Fair Trade USA (FTUSA), has this week suspended the certification of the Fyffes owned Suragroh melon plantation in Honduras, in response to evidence of labour rights violations.

The suspension followed an open letter to FTUSA from twenty five human rights and labour organisations from North America, Europe and Asia, including Banana Link, calling into question their certification of Suragroh.

For more than a decade, workers at Suragroh have reported to the trade union STAS-FESTAGRO that Fyffes has failed to pay minimum wages or any statutorily mandated benefits such as healthcare, social security, maternity leave, education vouchers, overtime, sick leave or vacation. Workers have reported illegal firings of pregnant workers, exposure to hazardous agrochemicals, and systematic threats and harassment from their supervisors for speaking out to protect their rights.

In response to the open letter, FTUSA stated that “given the severity of the allegations and the weight of the evidence, we moved quickly to suspend Suragroh’s Fair Trade certification while the reported issues are investigated. During the suspension, Suragroh is prohibited from selling under Fair Trade (USA) terms or with the Fair Trade Certified seal.”

In 2017, a global alliance of civil society organisations and trade unions, including Banana Link, launched the Freedom & Fairness for Fyffes Workers campaign, calling on Fyffes to respect the rights of workers in its global supply chains, including at Suragroh.

While, in response to the evidence of labour rights violations at Suragroh, Fyffes was suspended in 2017 from membership of the Ethical Trade Initiative (ETI), a UK based alliance of companies, trade unions and NGOs that promotes respect for workers’ rights around the globe. The ETI asked Fyffes to prepare a remediation plan to deal with the issues, to be agreed with the International Union of Foodworkers (IUF), before they could be readmitted to membership of the ETI. Fyffes’ negotiations with the IUF have yet to reach a conclusion. 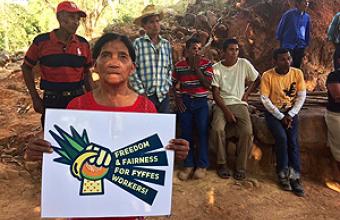