Colombian trade union Sintrainagro yesterday concluded negotiations with banana producers Augura, which will see 22,000 plantation workers receive an above inflation pay deal in the the world’s fourth-largest banana exporting country.
With inflation currently at 3.75%, and predicted to drop to 3.30% next year, the workers will receive an effective pay increase of 5.5% in the first year of the two year pay deal, while in the second year they will receive a rise equivalent to the increase in the Cost of Living Index. Additionally, each worker who is a member of Sintrainagro will receive a one-off premium payment of $550 next month.

Sintrainagro President Guillermo Rivera (left) and General Secretary Adela Torres signing the agreement (Photo: Sintrainagro)
This latest deal is testament to the organising strength of Sintrainagro and the positive relationship they have fostered with Augura which sees its members’ terms and conditions contrasting favourably with those endured by their counterparts elsewhere in Latin America. With an approach known as “social unionism”, the relationship goes beyond wage bargaining and addresses the wider necessities of the workers’ communities by co-operating with employers and municipal authorities to, for example, provide state-of-the-art medical facilities, 50 per cent owned by the union, while workers’ children can go to a school that has also been part-funded by Sintrainagro, and many live in new blocks of flats.
The agreement also includes a commitment to employ more women and the establishment of a round table with employers and the health authorities to discuss improvements in the local healthcare service, prompted by Sintrainagro concerns about the quality of care.
IUF Latin American Regional Secretary Gerardo Iglesias congratulated the union and the employers for their commitment to the collective bargaining process, describing the agreement as “an island in the sea of a global banana industry marked by low wages, outsourced labor, anti-union persecution and enclaves of poverty.“ 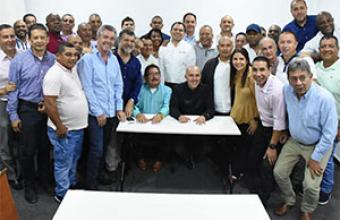