A life fighting for a fairer deal for Nicaraguan workers

Banana Link International Coordinator, Alistair Smith, pays tribute to our colleague and friend Abilio Castro Garcia who died on Monday 18th May of Covid-19 in Chinandega in North West Nicaragua. We join our colleagues from across the Latin American plantation worker community in expressing our deep sympathy to his family, friends and co-workers at the Rural Workers’ Association (ATC).

Abilio was a liberation fighter in the Sandinista movement that brought Daniel Ortega to power in 1979, alongside his ATC colleagues from Chinandega. Throughout his life he struggled for better working conditions, fair wages, and for a government that genuinely prioritised the needs of the poor. He was very much involved in the conversion of a large sugarcane plantation to a banana workers’ cooperative. He also trained to be a lawyer, which allowed him to support his organising work with ATC Chinandega.

On a personal note, it was with Abilio and his ATC colleagues Doris Garcia and Marcelino Garcia that I visited a Latin American commercial banana plantation for the first time, in the ozone-hole burning summer of 1995 with a small group of English farmers. He treated us ‘cheles’ with the amused respect with we probably didn’t deserve. We will all remember – Lady Mary, Eduardo, Peter the ‘chompipe’ farmer – being ‘treated’ to turtle eggs and rum on a deserted Pacific beach in 45 degrees of heat, learning the lyrics of “Casas de Carton”, “La Masa sin Canter” et al.

Suffice it to say that he and Doris were very much part of the reason that Farmers’ Link’s directors decided we should create a new organisation six months later, called Banana Link. If you don’t know Abilio’s favourite song then check out the music and lyrics here :

Above all, many will remember Abilio for his excellent sense of humour. Despite living through some very serious situations of civil war, extreme poverty, widespread pesticide contamination, his own health issues, intolerable pain from having wrecked knees, etc, he was always laughing and making people laugh.

A tribute to Abilio from the Coordinating Body of Latin American Banana and Agro-industrial Unions (COLSIBA). 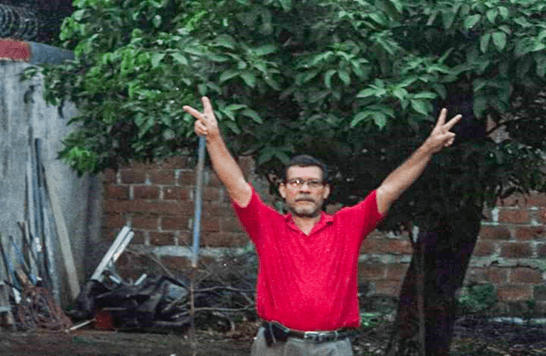