Banana futures in the balance

With the banana industry gathering at Fruit Logistica next week, we take a look how the banana trade is changing to meet the challenges it faces, and how the World Banana Forum is leading that change.

Banana Link will be present at Fruit Logistica, participating in a number of panel sessions hosted by the World Banana Forum – the details of which are at the bottom of this email.

Major economic players in Europe’s biggest banana markets are moving the goalposts for the future of banana production and trade. Ten years after the creation of the World Banana Forum, the sustainable future for production and trade – that seemed back then to be a rather utopian dream amidst the commercial turmoil of the longest dispute in world trade history – is starting to look far less like wishful thinking.

Even governments, which have tended to have a very hands-off approach to legislation and policymaking relevant to the pressing issues affecting the banana world, are moving into gear when it comes to the future of the world’s most traded fruit.

Following on the heels of a large group of Dutch retailers, German supermarket chains, including big international players like Aldi, Lidl and Rewe have decided this month to make the achievement of living incomes for growers and living wages for workers in banana and other food chains a strategic and collective goal. Given that Aldi was the pariah of banana producing countries just a year or so ago when they forced down the price they were prepared to pay growers, this is indeed significant.

It would seem that Aldi has listened and learned from their peers in the World Banana Forum about more coherent sustainability strategies. A modest move upwards for their 2020 global contract price could be the signal that we look back on as marking the beginning of the end of the “race to the bottom” in banana pricing and in investment strategies by the big producers.

One of the interesting points about this move to start counting costs that have not been previously counted is that it is being very actively encouraged by the German government. Two Ministers have been active in promoting the need for business to not only respect human rights in all their operations, but also in the need to show citizens and consumers that they are actually doing so. Transparency is a vital step if the global and local value chains that the big buyers control are to be transformed into forces for good rather than the vehicle for human exploitation and ecological degradation.

Still in the German context, talk of legislation is not only being used as a way of encouraging the private sector to act responsibly, but enacting that legislation and giving teeth to enforcers is being seen as necessary to create a fair playing field for all players.

It remains to be seen whether the initial drive that came from retailers in Europe’s second biggest market will continue to be the positive force that they have been in pioneering a more responsible approach to sourcing food and other products. The British supermarket chains could go further than their continental counterparts in making commitments that encompass living incomes and wages for all, but also in upping their game on the need for a change of production system.

The British are well placed, because of the Bananex programme, to recognise that the security of future supplies of the country’s favourite fruit is very seriously compromised, if not completely scuppered. TR4 needs to be understood as a signal that the industrial, chemical-dependent monoculture Cavendish banana system is finished. The soil is exercising its complaint mechanism! Changing the variety alone is also unlikely to be the simple answer, even if there were one ready to replace Cavendish.

So far, it is France’s global retail giant Carrefour that has started to show the way on sustainable production, asking suppliers, including all the major multinationals, to produce credible agroecological transition plans for the next few years. Others may be in the process of realising that it is not just in the interest of biodiversity to go down this road, but it may be in the interests of the survival of the commercial banana as the world has come to know it over the last 150 years.

The agroecological solutions can be shown at small scale here and now, but they have not yet been developed at scale. This is the task for the major players that nobody pretends will be easy, but it is a task that is best shared. Good ideas, innovative productive practices, socially and economically just solutions will not be found by one or two companies going it alone. It is the task of all. The more who agree to share freely what works and adapt innovations and practices to local circumstances, the easier the transformation is likely to be.

As big players undertaking organic production at scale can testify, non-chemical production is not just about substituting one set of technologies for another, it is about a change of mind-set and a change in the ways of managing and deploying human skills. Monocultures will always carry risks that more diverse systems have ways of mitigating or reducing. The future is likely to be about mangoes amongst bananas, or inter-cropped with cocoa, coconut, coffee, trees, vegetables and flowers. And what about animals?

The future is more intensive in knowledge, more understanding of the natural complexities of living systems. It is good news that the banana world is waking up to realities that really call into question the hitherto ‘conventional’ ways of doing things. Everybody in banana chains earning a sustainable livelihood and helping run farms growing a diversity of crops that include commercial quality bananas is a vision which is starting to emerge as not only necessary but realistic and even feasible.

The World Banana Forum’s members are helping turn this vision into reality, but everybody has a role to play. Join us.

Banana Link and the World Banana Forum at Fruit Logistica

The WBF will be participating in this panel session:

A multi-stakeholder panel will discuss the banana industry efforts for global pre-competitive cooperation in order to achieve economic sustainability. A special focus will be placed on present activities aiming to enable a global approach to the issue of distribution of value and corporate responsibility, where the role of diverse stakeholders will be debated.

The WBF will be hosting four panel sessions discussing some of the major challenges facing the industry, all in CityCube Berlin Building, Level 3, Room M4+M5:

10:30 – 12:40
Is pre-competitive cooperation possible in the banana industry?

15:30 – 17:00
How are occupational health and safety activities supporting better labour conditions within the global banana industry?

Further details are contained in the Fruit Logistica Programme of events here – https://www.fruitlogistica.com/TradeVisitors/Events/DayProgram/PDFDayProgram08022018.jsp 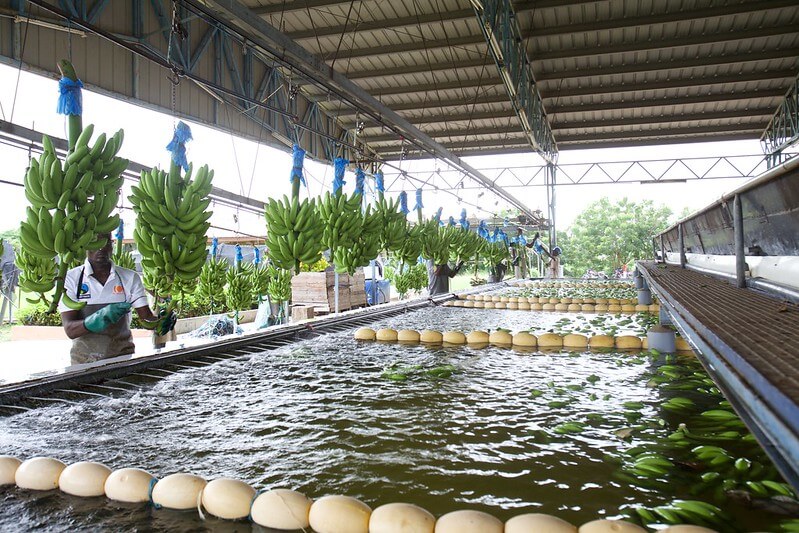