On 2nd June, over 60 banana containers belonging to the Dole Food Company’s Honduran subsidiary were blocked from accessing the port and over half of them burned near the town of Colon. The incident came in the midst of rising protests across the country over Presidential decrees by Juan Orlando Hernandez which many think will destroy basic public education and health services.
The same day a Guatemalan newspaper, citing a Guatemalan agribusiness organisation, reported that Dole had announced it was leaving the country to invest in its existing banana operations in neighbouring Guatemala and to make new investment in Mexico. The story was then picked up by several international trade media.
However, it emerged that Dole had made no such announcement and the following day issued a statement reaffirming its commitment to stay in Honduras, despite the current turbulence:

“Dole is extremely concerned with the political and social unrest Honduras is facing and the impact its having on our equipment, operations, and those in our supply chain in country. Despite business disruptions, the company remains committed to Honduras, our workers and our banana and pineapple operations that exist there and hopes for a speedy and peaceful resolution. We hope to be able to resume daily operations as soon as we are resolved that our employees and assets are secured and protected.”

Following the burning of the containers of fruit, Dole initially requested Labour Ministry support for temporary lay-offs of part of its 8,000 strong banana and pineapple workforce. However, in negotiations with the trade unions representing plantation and packhouse workers, a joint plan was agreed and the suspension request was withdrawn. Unions working in plantations that supply Dole in Isletas, Coyoles and Olanchito had also expressed their solidarity with those employed directly, threatening that they would stop work if the suspension went ahead.
The General Secretary of the largest trade union of Dole workers, SUTRASFCO, reported to Honduran press on 6th June that all operations were back to normal noting that « this gives the workers a much-needed breathing space after several days of tensions». Those who had been temporarily suspended were all reported to be back at work.
In a private meeting at the end of last week between Dole management and President Hernandez, measures to increase the security of the company’s operations were agreed, press reports stated.
The video below shows the extent of damage to Dole containers:
Sources : El Periodico, Guatemala, 2nd June, and various Honduran press. 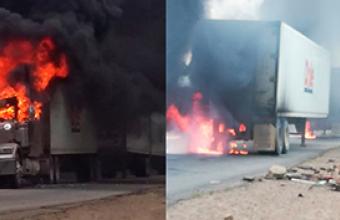