Negotiations between trade unions and employers have concluded with collective agreements that will see benefits for workers at two separate banana plantations in Honduras.
The Union of Workers of the Bananera Rio Mame SA (SITRABARIMASA) has signed its ninth collective agreement with the multinational company Dole, which, following good faith negotiations, will provide considerable improvements for workers.
The president of the union, Eduardo Min Montoya said “we managed to maintain the medical service, which has been a cause of conflict in other companies, and achieved a wage increase of 6% for all contracted workers for each of the three years of the agreement, plus a bonus of 11,000 lempiras (around £360)”.
Inflation rate in Honduras is currently running at 4.8% and forecast to fall to 3.8% over the next twelve months.

Photo: The SITRABARIMASA negotiating team (Colsiba)
Meanwhile the Union of Agroindustrial and Similar Workers (STAS) has concluded its fifth two-year collective agreement with the company Guaruma Agroindustrial that will benefit more than 120 workers. The three farms that make up this national company used to belong to Chiquita subsidiary Tela Railroad Co. until Hurricane Mitch destroyed the crop in 1998 and the multinational abandoned the land.
The agreement will see significant increases in salaries, while medical examinations for women and men are also sought in order to prevent cancer, and quality and production goals have been agreed for the workers.

Photo: negotiators at Guaruma Agroindustrial (Colsiba)
Banana Link International Coordinator, Alistair Smith, said:
“Banana Link has always believed that the interests of plantation workers are best served through organising in independent trade unions to negotiate for improvements in pay and working conditions. These two collective bargaining agreements, along with that signed recently in Colombia, are testament to the hard work of both unions, and show what can be achieved when employers and unions are able to sit down and negotiate in good faith”.
SITRABARIMASA and STAS Are both constituent members of the Federation of Agroindustry Trade Unions of Honduras (FESTAGRO).
Source: www.colsiba.org 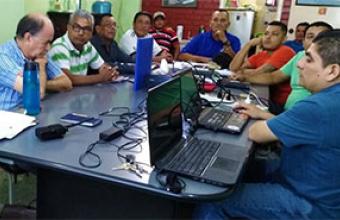