Costa Rican banana producer Grupo Calinda has, this past weekend, dismissed 60 workers from it’s packing plant, in what the trade union SITRAP believes is an attempt to undermine the union.

Thanks to their recent recruitment efforts, SITRAP were close to reaching the legal threshold of members at the plantation which would, under Costa Rican labour law, oblige the company to recognise the union and enter into collective bargaining with them. Dismissing workers for this reason would be contrary to Article 60 of the Political Constitution of the Republic of Costa Rica, and to Convention 87 of the International Labour Organisation on Freedom of Association, to which Costa Rica is a signatory.

The company claims that it is dismissing the workers and closing the packing plant due to the poor performance of the workers, which it claims has caused the company to suffer huge losses.

Didier Leiton, SITRAP General Secretary (pictured), believes that behind this decision there is a long-term strategy, which foresees the outsourcing of the packaging operations and the weakening of the union. “It is not true that workers are underperforming. What happens is that the company has been cutting work hours and employing strategies to reduce its performance”, he told Rel-UITA. “We have photos and videos where it is clearly seen how the harvest is being delayed, and then throwing away the fruit in poor condition and accusing the workers of low performance.”

On Saturday 26 June, the company, at the end of their working day, called the workers to the office to deliver letters of dismissal, which were handed over to the workers under the surveillance of a large number of police officers from the Costa Rican Ministry of Public Security. “This left the workers feeling like they were being treated as if they were delinquents, although they have not at any time shown any signs of violence”, said Leiton.

Gilbert Bermudez, Coordinator of the Coordinating Body of Latin American Banana and Agro-industrial Unions (COLSIBA) regretted and rejected the “dehumanising and intimidating treatment that this company is giving to the workers who organise in the union“.

Moreover, recruitment for the new company who would be taking over packing operations – Operaciones Global Fruta CR Sociedad Anónima – was not undertaken openly, such that unionised members were not aware and consequently not hired to work for the company.

Grupo Calinda has refused requests from SITRAP to engage in dialogue over the dismissals, and a number of European NGOs, including Banana Link, and trade unions, wrote to the company last week calling on the company to halt the planned dismissals and initiate dialogue with SITRAP to find solutions to what the company claims is solely a matter of poor performance of packing plant workers. 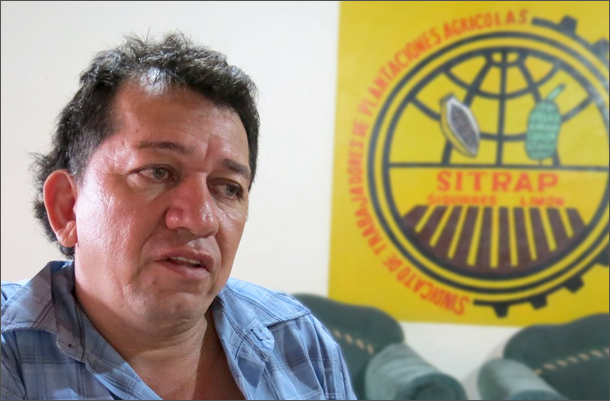