The Colombian Agricultural Institute (ICA) has this week confirmed the presence of the banana disease Fusarium Wilt tropical race IV (TR4) in the country and has declared a national emergency with additional controls to mitigate the risk of contagion to other farms.

“We are declaring a national emergency, despite the disease [only] being confirmed in La Guajira, in order to speed up the process of controlling the disease,” said ICA) general manager Deyanira Barrero León during a news conference.

She emphasized that banana exports would continue, as the fruit can still be consumed normally and TR4 – also known as Panama disease tropical race IV – does not affect human health.

The ICA is working together with banana associations Augura and ASBAMA to ensure the disease can be detected as quickly as possible if it spreads.

This include surveillance flights in the affected region to spot signs that the disease has spread to other farms; the installation of checkpoints to monitor and disinfect vehicles; segregating containers used in the affected areas and training workers in biosecurity measures. At the same time controls at ports, airports and border posts with be reinforced.

The Ministry of Agriculture is said to be considering providing loans to help small and medium producers implement the extra biosecurity measures.

ICA stressed that Colombia’s banana exports would continue and that systems to clean and disinfect containers had been installed at the port of Santa Maria to prevent the fungus from being spread via contaminated containers.

Representatives from the main Latin American and Caribbean banana producing countries also met in Quito this week to discuss joint measures to prevent the spread of TR4 after samples taken from two plantations in northern Colombian tested positive for the fungus.

The agriculture ministers of Colombia, Peru, Bolivia, Brazil, Mexico, Cuba, Guatemala, Costa Rica, Honduras and Panama, as well as delegates of the Andean Community of Nations (CAN), the International Regional Organisation for Agricultural Health (Oirsa) and the German organisation GIZ took part in the meeting, which was convened by Ecuador’s vice president, Otto Sonnenholzner.

Ecuador’s Vice Minister of Agricultural Development, Byron Flores, said that the government had implemented a protocol to prevent the disease from entering the country. This includes biosecurity measures at ports, airports and border crossings, such as the disinfection of containers and footwear, and baggage checks on passengers arriving from high risk countries.

Ecuadorean Agriculture Minister Xavier Lazo highlighted the importance of bananas to the regional economy, both as a source of employment and revenue. 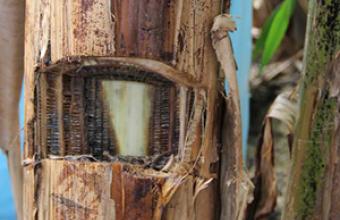