In the first seven months of 2019, the Philippines exported fresh bananas to the value of over US$ 1.13 billion, up over 55% compared to the same period in 2018, confirming the country’s position as the world’s number two exporter after Ecuador.
Provided there are no major climatic disruptions, the country is heading to break its 2014 record of 3.6 million tonnes of banana exported. The volume exported by the end of July already exceeded the total annual volume likely to be achieved in 2019 by each of the next three biggest exporting countries : Guatemala, Costa Rica and Colombia.
The Philippines expansion, mainly on the island of Mindanao, has taken place despite thousands of hectares of lowland plantations being infected with Fusarium TR4 disease and serious pressure from the black leafstreak disease (Sigatoka). The current hectarage of TR4-affected land is not known, but the government figure from 2015 was over 15,000. Some sources indicate that this area could be up to double by now.
Since last year China has taken over from Japan as the biggest importer of bananas from the Philippines. Although Ecuador and, to a much lesser extent, other Latin American exporting countries have been able to take advantage of the rapidly increasing Chinese demand for imports, it is the Philippines that is best placed in terms of both proximity and volumes. Last year, it is estimated that the Philippines-China banana trade accounted for some 6% of the world market, at 1.27 million tonnes. Volumes to Japan and South Korea have also increased substantially this year.
Major questions remain over whether this expansion in volumes exported can last. There are also major questions as to the real social and environmental conditions of this continuing monoculture Cavendish production for export. For the time being however, the Philippines banana industry is booming in spite of being the country that seems to demonstrate many of the negative impacts of the model, including being the most affected by TR4. 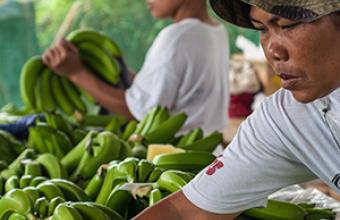