Japanese consumer groups campaigning for ethical bananas from the Philippines

Following the recent launch of an “Ethical Banana” campaign in Tokyo to promote environmental protection and social justice for the Filipino farmers, civil society organizations (CSOs) and consumer groups in Japan have initiated a system to monitor bananas exported from the Philippines.
The campaign, launched by the Interface Development Interventions (IDIS), seeks to encourage Japanese consumers to buy bananas produced by companies that observe good agricultural practices and promote the welfare of the banana farmers.
Bananas are the third largest food commodity in the Philippines in terms of production volume, after rice and coconut, grown mostly in plantations in Mindanao in southern Philippines. 30% of bananas consumed in Japan come from big banana plantations and other organic banana suppliers in Mindanao.
The groups behind the campaign, the Asia Pacific Resource Centre, Alter Trade Japan, and Alternative People’s Linkage in Asia (APLA), are planning to come up with scorecards on Filipino banana produce and to provide consumers with information on the agricultural practices of the banana companies in the country.
IDIS will also conduct a study on the environmental hazards and follow up monitoring for the best agricultural practices of banana plantations in the regions and in other parts of Mindanao. Chinkee Peliño-Golle, IDIS executive director, said the multinational Japanese corporation Sumitomo Fruits Corporation (SUMIFRU) uses the banned aerial spray method for pesticides, which poses a hazard,  such as increasing toxic exposure for people and the environment.

Photo: IDIS
“We will urge banana companies to adopt and practice Good Agricultural Practices (GAP) in their farms to ensure food safety and assured quality of banana in Mindanao,” said Atty. Irvin Sagarino of the Initiatives for Dialogue through Empowerment and Alternative Legal Services (IDEALS).  “GAP are particularly important in the banana industry, not only for sustainability of production and minimization of environmental impact, but also to ensure that harvesting, packaging and transport activities are conducted in hygienic conditions in order to deliver safe and good quality fruit to consumers”.
Poor working conditions and negative environmental impacts of the Filipino banana industry have been well documented, including this 2016 video report by Radio New Zealand  which painted a poor picture of the working conditions and respect for labour rights on plantations in the Philippines.
Sumifru is a subsidiary of the Sumitomo Corporation, who last year bought the Irish multinational fruit giant Fyffes, which is currently suspended from the UK Ethical Trading Initiative as a result of evidence collected in 2016 of labour rights violations at the company’s subsidiaries in Costa Rica and Honduras.
Banana farmers pushed into poverty
Meanwhile, a 2018 case study by Oxfam – Land but no freedom: Debt, poverty and human suffering in the Philippine banana trade – explains how many banana farmers in the Philippines are being pushed deeper into poverty by the companies, like Sumifru who buy their bananas for export.
IDEALS has been working in partnership with Oxfam to support farmer cooperatives in their efforts to renegotiate unfair contracts or have them nullified. They have recently published this short video to show the suffering of banana farmers, exploited and abused, full of debt and mired in poverty.
Sources
http://www.mindanews.com/
http://edgedavao.net/ 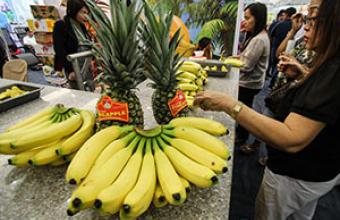