The banana world has been saddened this week at the news of the death from covid-19 of Joaquín Vázquez of the Collective for Sustainable Family Farming in Ecuador.

Joaquín was a long time friend and partner to Banana Link and a leading participant in the European Banana Action Network (EUROBAN), a meeting of which he had participated in just two weeks before he died this past Sunday, and the International Alliance of Sustainable Family Farming (IASFF).

We have collected below the thoughts of partners in EUROBAN and the IASFF who have known and worked with Joaquín for many years to promote sustainable and ethical practices in the banana trade and particularly to represent the interests of small-scale family farming communities.

We must accept with resignation that our dear friend Joaquín Francisco Vázquez Mateo is no longer with us. His commitment, patience, intelligence and solidarity have always stimulated us and we will miss them enormously. 25 years ago we began to meet with Joaquin, at that time president of the small family producer organisation UROCAL (Regional Union of Campesino Organisations on the Coastal Plain), at fair trade events in Latin America and Europe, trade union conferences and campaigns in consumer countries.

Joaquín had already a wealth of experience with many years of struggle for land and the development of communities and peasant production. With clear ideas and concepts about the challenges to overcome through ecological and sustainable production with social justice, he was the essential initiator and inspirer of the cooperation between his small producer organisation and BanaFair in Germany. Along with the commercial operations based on solidarity between conscientious consumers and the families of small producers, we built friendship bridges during the many information and promotion tours with Joaquín and his fellow producers, visiting the World Shops as multipliers and other commercial operators, interested in this sustainability model. Joaquín always searched solutions to the problems and setbacks we had to face as producers and traders with this alternative proposal of small family farming.

Four years ago he started a new chapter, in union with courageous colleagues, producers and personalities, achieving the founding of the small producer company Emprocompt and the Cendero foundation. In 2019 he became a main co-founder of the IASFF with partners on three continents, to which BanaFair also belongs, to work on solutions to the urgent economic and social problems of small family production, with a strategy that is part of the legacy he has left us.

We follow the example that Joaquín has given us, working towards the objectives of our common work with the small family producers. May he rest in peace!

Joaquín on a Speaker Tour in Germany, visiting a “Weltladen” (World Shop)
where bananas from his small producers organisation are sold

The essence of what was present in our hearts

I first met Joaquín at the World Banana Forum Steering Committee in Rome, Italy in Spring 2019. I remember it vividly. Joaquín gestured with his hand to let me know that he wanted to talk and so we had a friend briefly translate our intention that we would like to talk more with each other.

With the kind facilitation support of the Banana Link team we found ourselves meeting again in Machala, Ecuador later that year where we were graciously hosted by Joaquin, Millyn, his organisation, and his wonderful family farming community and SINUTRABE. We greatly admired their beautiful diversified organic banana farms which is a testament in itself. The visit and meeting led to our formation of the IASFF and the months that follow we convened to talk about ideas and ways to work together.

Despite the language barriers, we shared the same language of vision and purpose for IASFF and the deeper understanding that we will work pragmatically, inclusively, and conscientiously.

Throughout our work meetings, Joaquín showed humility, directness, persistence and his perspective has always been crucial. It was very important to find the essence of what was present in our hearts, minds and work in the Philippines also articulated and beautifully practiced by Joaquin and his family farming community thousands of miles away across the Pacific in Ecuador. 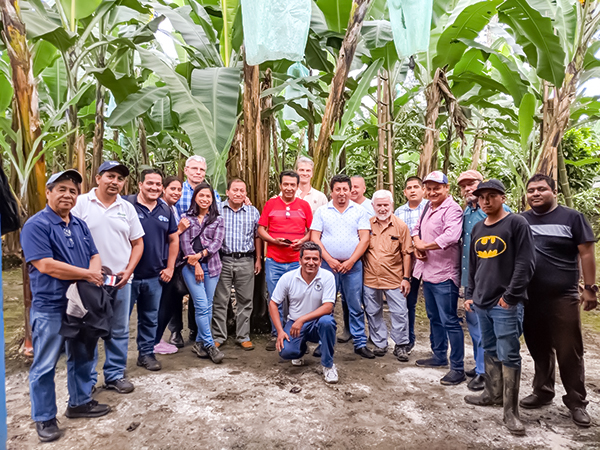 Joaquín (seventh left) with members of the IASFF in Machala, Ecuador, 2019

His example will live on in our hearts

I have to admit that it is difficult for me to sit down to write something about our colleague and friend of so many years, Joaquín Alberto Vázquez Mateo, his humility, frankness, solidarity, were only some of his virtues.

I met him in San Pedro Sula, Honduras, at the third conference of COLSIBA in May 1995. He was a signatory of the agreements of this third conference and from there we built a friendship that lasted over time. He participated on behalf of UROCAL in COLSIBA until 1999, then with his support we contacted FENACLE, which as a trade union federation continued its participation in COLSIBA representing the workers of the agro-industry of Ecuador. However we never lost personal contact and our friendship.

I remember the various tours we made to Europe organised by the various organisations of EUROBAN, Banana Link, BanaFair, OXFAM, etc. There could be many anecdotes from these tours, including some that we made together with Renwick Rose of the Windward Islands Farmers Association (WINFA) and Koronado Apuzen of Farmcoop in the Philippines.

I remember with joy one of our tours to Ireland, where together with Joaquin and German from Honduras, Alistair and Harry, we walked the streets of Dublin one night after taking some 10 Guinnesses. They were very nice times and full of optimism, on the road to the unity of small producers from Latin America fighting for a better tomorrow, marketing for their fruit, better living conditions and the trade unions fighting for freedom of association and collective bargaining, fair wages, better treatment for women and respect for the environment. Our agendas were always complementary. Joaquin never forgot this fact.

One day in 2012, we met Ponce Enriquez, then in Chumiral, his beloved town a few minutes from my house, also in his office in Machala, drinking coffee, chocolate or tea. We agreed on the need to resume joint efforts through EUROBAN, to make visible again the serious problems of small producers, who suffer the neglect of governments.

We always met to talk about our agendas of struggle, the fruit market, politics, etc. We also discussed the problems of freedom of association and collective bargaining of banana workers in Ecuador and the rest of Latin America.

It was with him that we decided that I should propose to EUROBAN, at the meeting in Rome at the beginning of 2019, that we should hold a meeting in November 2019 in Machala, Ecuador to strengthen the joint agenda and that is when we created the IASFF.

I will keep these fond memories of our comrade and friend, a supportive and simple man, Joaquin. COVID ended his life, not his ideals, as I said before, we are left with his example that will live on in our hearts. 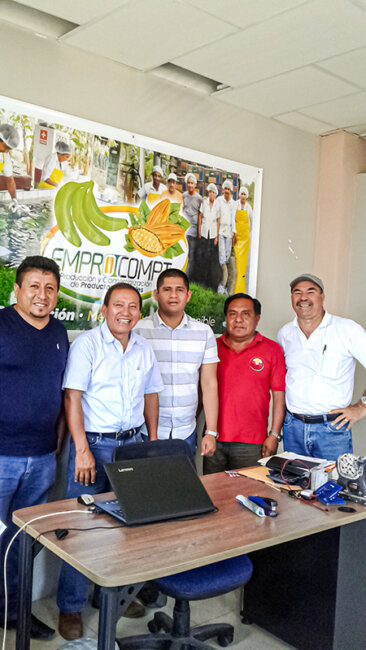 Joaquin was a real inspiration for us at Banana Link. In the early years he led land occupations with landless campesinos on the Pacific coastal plain of Ecuador and became leader of UROCAL. He pioneered the organic banana movement, but went further, insisiting that small farms should never depend on bananas alone. He led small farmers in modernising the tradititonal agroforestry model of bananas intercropped with cocoa, other fruit, trees and food products.

From the early days of EUROBAN, Joaquin always made really important practical and political inputs to our strategic thinking and action. He had a broad vision for transforming small farmer livelihoods that included alliances with organised workers.

Back in the year 2000, Joaquin travelled to meetings in the Caribbean to meet with other small farmers’ organisations from other regions of the world and share his vision of a South-South exchange programme. Nearly 20 years later, at his invitation, a group of organisations met in Machala, Ecuador, to form the IASFF. He was always clear that organisations in the Global North need this kind of initiative in their countries as much as organisations in the South, so the idea of South-South became South-South-North. We now have a responsibility to try and realise Joaquin’s dream.

Now that Joaquin is no longer here to lead, Banana Link commits to playing our part, along with family farmers and their allies in Ecuador and well beyond, in realising his vision of fair and sustainable bananas as part of human-scale agroecological farms. 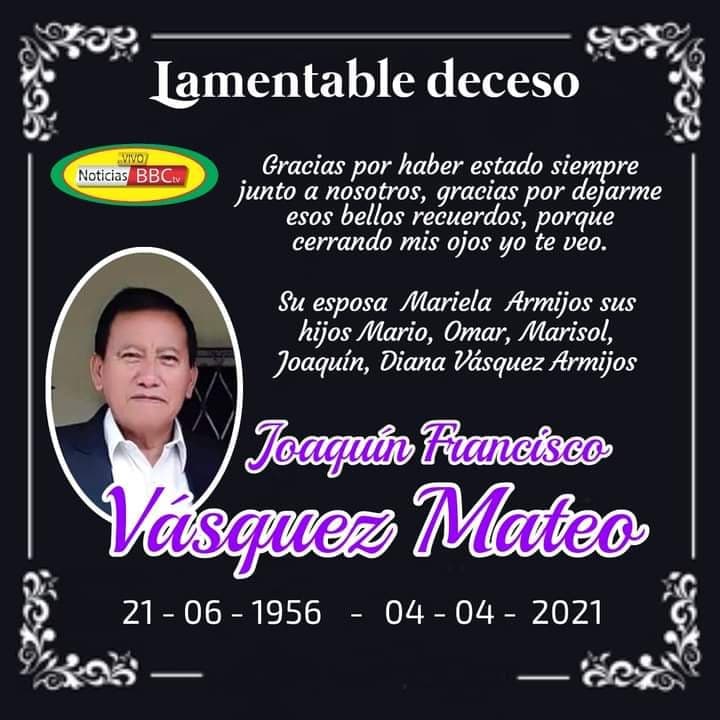