Panama disease, the fungal disease that lives in soils across the tropics, appears to be spreading more rapidly than first feared. This was one of the findings discussed at the recent International Congress of Plant Pathology (ICPP) conference that took place in Boston from July 29 – August 3. ICPP occurs every five years and provides an opportunity for industry professionals and scientists to discuss current issues and come up with potential solutions.
This year, part of the program was devoted to the Panama disease and the news was not good for banana growers. A strain of the fungal disease – Tropical Race 4 (TR4) – is one of the most devastating to banana crops. The disease causes banana plants to wilt and no region or grower is immune. As yet, there is no commercial treatment to eradicate or even control TR4.
“TR4 has had devastating effects on banana plantations in several parts of the world,” said Professor Gert Kema of Chiquita Bananas. “TR4 was identified in the late 1960’s in Taiwan, but nobody paid too much attention, hence it kept on spreading. It wasn’t until we found TR4 outside South-East Asia that the sector broke its silence and essentially ‘woke up’ since at that point many more incursions of TR4 were discovered by us and others. We are now at a point of no return and must prepare for the worst while investing in sustainable solutions.”
“Besides causing Panama disease in Cavendish bananas, TR4 can affect many other banana varieties,” he continued. “It is such a danger to bananas because there are currently no reliable control methods.”

Professor Gert Kema
ICPP conference reveals situation worsening
At the conference, scientists declared that the TR4 situation is becoming worse. According to Dr. Kema, one of the problems is that many in the industry continue to turn a blind eye and fail to properly invest in finding a solution. He said Chiquita Bananas is doing its part in helping to organize the conference and is a willing and ready partner for collaboration.
“At the 2018 ICPP conference, discussions included TR4, the vulnerability of the global banana production and Chiquita’s new view on sustainability,” Kema said. “Chiquita helped to bring leading scientists, researchers, industry players and institutions together to address this impending threat. Scientists from around the world met in Boston to discuss the current status of R&D and how TR4 can be dealt with. None of the industry partners has taken initiatives to stop that situation and invest into R&D towards sustainability, except for Chiquita.”
“The current status of TR4 dissemination is much worse than anticipated,” he continued. “The future scenario for TR4 dissemination is grim, however we have tools to slow down the disease as well as the methods, materials, skills and a community to turn the tide. Chiquita is ready to catalyze the process.”
Current and potential treatments
As mentioned, there is currently no commercial product that is available to banana growers. Many methods have been tried, with mixed results. Generally, the best methods involve precise application and require upscaling to become practical for commercial use. Scientists say the key is to reach the disease on the plant itself and then apply the treatment on a large scale.

Banana plantation in Costa Rica
“Soil sanitation methods are very effective, such as inundation, but require massive adaptations and investments,” Kema shared. “Moreover, water disseminates the fungus very well. Chemical treatments are detrimental for the environment and workers. Biological soil disinfestation has resulted in excellent results but awaits upscaling to practical levels. Genetic modification of Cavendish has been suggested along with breeding mutant varieties. While these are potential solutions, mutants and GM bananas targeting Panama disease are not addressing other major issues in current banana production such as black Sigatoka. These approaches are in a way narrow-minded as they do not address the underlying problem of monocultures or genetic uniformity and are therefore at best only a temporary solution.”
“While there is currently no cure that can replace the Cavendish or withstand the disease, I expect these to be available in the forthcoming 3-5 years,” Kema added. “We have biological methods that require upscaling and cannot be used on an individual plant basis but are possible in plantation rejuvenation processes and whole field applications.”
Working together is essential
As much as there are potential treatments for TR4, they are clearly expensive, difficult and time-consuming to develop. Therefore, Kema urged the industry to band together and pool resources to enable a long term solution, reiterating that no grower can avoid the disease however large or small.
“The entire banana industry needs to collaborate, expand, adopt new talent, rejuvenate and forget their own agendas,” he said. “We need to listen to and engage with the sector for the benefit of all banana growers. It is very artificial to separate between small holders and industrial producers since they all suffer from the same problems and need innovation from every angle. Therefore, the sector and the community have to adopt the latest insights for banana protection and improvement, and enable long horizons as huge problems generally cannot be solved with simple solutions.”
Chiquita Bananas sustainability goals a factor in responsibility
Chiquita Bananas has developed a sustainability program, “Behind the Blue Sticker” which the company says guides its choices when it comes to the future of its banana business. Kema summarized the “three pillars” that make up the program and how they relate to tackling TR4.
“The first two pillars focus on our core processes and neighborhood and with this cover topics like wages, environment, gender, education, etc,” he explained. “The third pillar focuses on our responsibility within the industry. TR4 is a serious risk to the food security and livelihoods of millions of people. Enabling innovation to tackle this disease is a moral obligation of all banana stakeholders and one that Chiquita fully embraces. We believe it’s our duty to take the lead, be an innovator and proactively work for the future of the banana industry. That is why Chiquita supported ICPP 2018 in Boston to begin a dialogue around long-term sustainable solutions.”
“It is clear that we never should underestimate the threat of Panama disease,” he concluded. “By continuously putting it on the agenda, we take our responsibility and realistically call for action. Rather than paper over the cracks and create false hopes we generate new data and strategies for structural and overall banana improvement. We are proud and thankful that Chiquita has decided to make a change, which requires courage and professionalism to build versatile consortia of partners that have a shared vision and ambition to turn global banana production – irrespective of the export trade or small holder production for domestic markets – into a sustainable and fair business.”
Reproduced from http://www.freshplaza.com/ 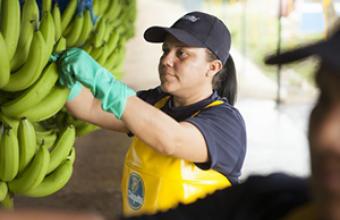