Ecuador has this week joined the countries that ratified Convention 190 of the International Labour Organization (ILO), against violence and harassment in the world of work.

The Convention, adopted at the Centenary International Labour Conference of the ILO in June 2019, recognises that violence and harassment in the world of work “can constitute a human rights violation or abuse…is a threat to equal opportunities, is unacceptable and incompatible with decent work.” It defines “violence and harassment” as behaviours, practices or threats “that aim at, result in, or are likely to result in physical, psychological, sexual or economic harm.” It reminds member States that they have a responsibility to promote a “general environment of zero tolerance”.

The successful adoption of the Convention were the outcome of sustained mobilisation and lobbying by trade unions, including the International Union of Foodworkers, whose General Secretary, Sue Longley, welcomed it, saying, “Throughout the process, IUF staff and affiliates have organised to pressure governments to support the process and lobbied companies to go on record with their support. This success belongs to them.”

The Convention was endorsed unanimously by the Ecuadorian National Assembly, and in a report drawn up by the legislative commission for Sovereignty and International Relations, the team considers that unacceptable behaviours include physical, psychological, sexual or economic harm and harassment, based on gender, in addition to incorporating sexual harassment as a central issue.

Among the requirements of ratification of the Convention is that signatories have in place mechanisms for filing complaints, resolving conflicts and a means of compensation for damages.

The Ecuadorian Ministry of Labor having issued a protocol to that effect to coincide with the International Day of Non-Violence against Women in November last year to address discrimination, workplace harassment and all forms of violence against women in the workplace.

In addition to Ecuador, Fiji, Argentina, Uruguay and Namibia ratified the Convention, making the third in Latin America to do so. 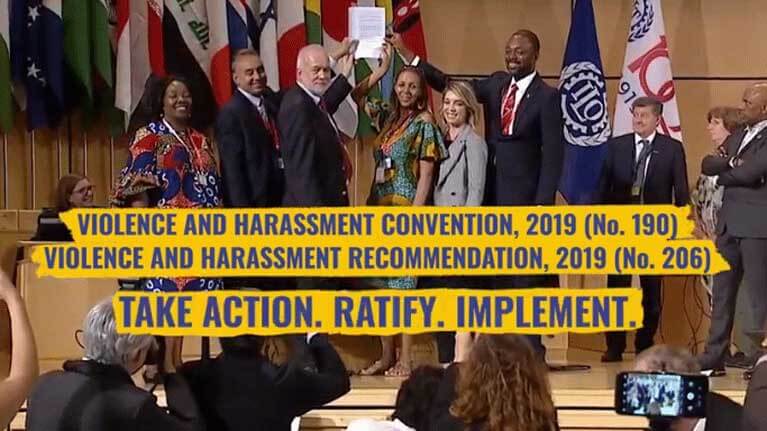