Trade unions representing workers at Chiquita plantations in Latin America have denounced the decision by the company to impose video surveillance cameras in workplaces as outrageous.

The Banana Industry Workers’ Union (SITRAIBANA) in Panama is holding a strike to demand the removal of security cameras from the installations of the Chiquita Panama banana company, located in the district of Changuinola, Bocas del Toro.

Abel Pineda, union representative of SITRAIBANA, explained that since “on 8 March we made the request to Chiquita Panama (for the removal of cameras) and the intervention of the Labour Ministry (Mitradel) in the matter, they had not listened to us since we made the complaint in writing“.

“On the 26th we gave the government three days to intervene with the company, but they never listened to us, so on the 29th we declared an indefinite sit-down strike,” Pineda maintaining that the cameras represent a form of harassment and that their implementation was not discussed with the union.

In a circular, addressed to SITRAIBANA general secretary Francisco Smith and Mitradel, Chiquita regional director Ignacio Serrano, said “The use of this technological system has the following objectives: To ensure the security and physical integrity of all our employees who are in any of our company’s facilities. To improve the traceability of the process: Currently, the banana sales business is increasingly demanding in terms of the high quality standards that we have always met, which has led us to have the need to improve the traceability of the fruit throughout the packing process through video surveillance“.

In the note, they also stated that another of the objectives is: “To protect the assets and raw material owned by the company, which allows us to carry out our daily work, to ensure that the Chiquita Panama operation is maintained continuously in all the countries where it has an operation“.

The company clarified that the video surveillance cameras will not be placed in places such as: bathrooms, rest areas and canteens.

The Coordinating Body of Latin American Banana and Agro-industrial Unions (COLSIBA) strongly rejects the actions of Chiquita, the real intention of which, they believe is to restrict the right of workers to defend their labour rights.

In a statement, COLSIBA states:

2. Chiquita has failed to exhaust dialogue with the unions before imposing any change or video surveillance equipment in the workplaces.

3. COLSIBA calls on the top management of CHIQUITA to intervene promptly in the situation in Panama and that dialogue be encouraged before imposing any change in the working relationship on the workers. 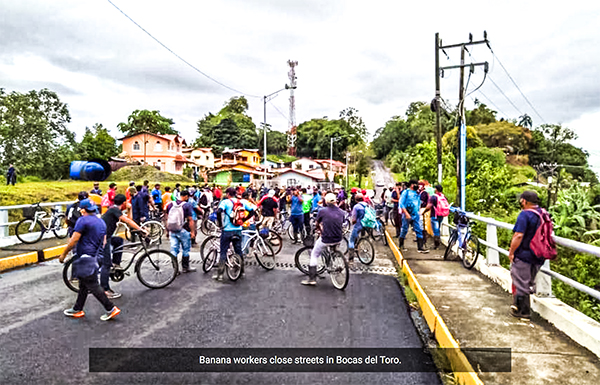