A new report – What Difference Does a Union Make?: Banana Plantations in the North and South of Guatemala – published by the Center for Global Workers Rights at Penn State University in the United States, illustrates the stark difference in pay and working conditions for unionised and non-unionised workers in the Guatemalan banana industry.

Guatemala is currently the third largest exporting country of bananas in the world, and by far the largest exporter of bananas to North America, with two exporting areas: one on the southern Pacific coast, which is non-unionised and represents 85 percent of employment in the sector, and the other in the north where nearly all workers employed in banana plantations are unionised. Northern Guatemala is also home to one of the stronger unions in region, Sitrabi, which represents Del Monte workers, whilst other unions represent Chiquita workers in the same Caribbean coastal area.

The report, based upon a survey of over 200 workers (34% women), as well as extensive interviews, an examination of trade data, and a review of relevant prior research, found:

These differences have also been reflected in Covid-19 provisions: in unionised plantations, for example, better physical distancing, worker transport and hygiene training have been negotiated with management, whilst relatively little protection has been provided in non-unionised plantations.

The role of retailers

The report recognises that the root cause for the situation is the “mega supermarkets” who are able to use their buying power to constantly look for ways to squeeze down prices. This squeeze contributes to the push to find lower-cost production sites through outsourcing to local producers, who then squeeze labour through low wages, long hours of work, and an ever-increasing pace of production. The image below shows the distribution of value in the supply chain for Guatemalan bananas into the USA, with the retailers taking by far the largest slice, and workers the smallest. Guatemala has a long history of union repression, which has been very violent. The country regularly ranks among the most dangerous countries in the world for trade unionists, and the report identifies that from 2004 to 2018, 101 labour unionists were killed, the location of 81 of these killings shown below, many in the banana growing regions. Sitrabi alone lost 11 leaders between 2007 and 2011 in killings that have remained unpunished and barely investigated. The report’s conclusions and recommendations

The clearest conclusion from the author of the report is that unionisation makes an enormous difference in workers’ living standards and the conditions of labour. Unions dramatically increase wages, ensure acceptable hours of work, contribute to less verbal abuse and sexual harassment, and provide for safer workplaces.

Banana workers on Guatemala’s southern coast are facing unacceptable conditions of work. Local employers, fruit companies, the government of Guatemala, labour unions, certification programmes and most especially the large North American supermarket chains that exert enormous leverage over supply chains must play a role in transforming this situation so that workers can enjoy their jobs with the dignity that they deserve.

Retailer pressure does not exonerate fruit companies from their role in addressing the worker rights abuses documented in the report. Fruit companies with a significant presence in Guatemala (Dole, Del Monte and Chiquita) must ensure full compliance with labour standards at their directly-owned facilities and their outsourced facilities. Contracts with suppliers who persistently violate workers’ rights should be terminated.

In short, the price paid for a banana must include the full cost of living wages for normal working hours at an acceptable pace of production, and in workplaces that are safe for the workers and for the surrounding environment.

Moreover, the report recommends, the government of Guatemala must make use of all the means at its disposal to stop the killings of trade unionists. Guatemalan labour law and enforcement mechanisms are in need of reform. Laws facilitating unionisation, increasing labour inspections, and creating stiffer penalties for violations that are paid in full are basic and necessary steps in this direction. 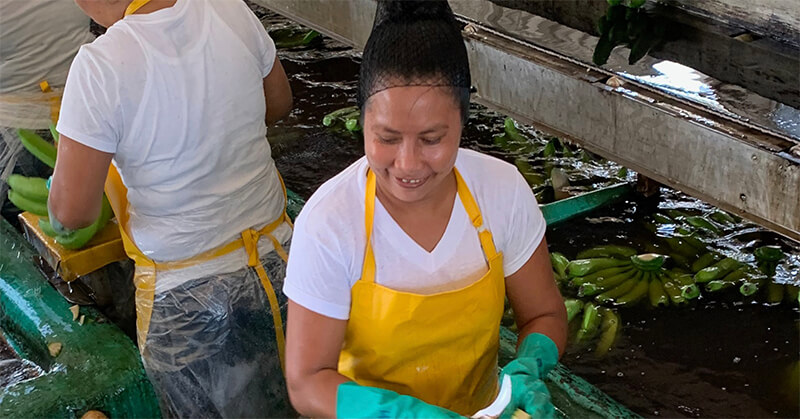