In the wake of the protests by agroindustrial workers in the South and the North of Peru that led to the derogation of the infamous 27360 Law in December, the National Federation of Agricultural, Irrigation and Allied Workers FENTRAIR, in cooperation with SITRATALSA, the union of workers in the TALSA company have created a union training school based in Trujillo, in the Northern province of La Libertad.

The Escuela Sindical Nacional de Trabajadores del Sector Agrario has signed a convention with the Antenor Orrego University and the Labour Inspectorate, SUNAFIL, to deliver training on workers’ rights, collective bargaining and to offer legal advice to workers. The overall aim is to train future leaders who will lead the struggle to “democratise workplaces and end exploitation in the industry”.

At the inauguration of the School on 13th February, the leadership of the Confederación de Trabajadores del Perú (CTP), the trade union confederation to which FENTRAIR is affiliated, as well as representatives of La Coordinadora Latinoamericana de Sindicatos Bananeros (COLSIBA) and Banana Link spoke with enthusiasm about the vital importance of worker education and training. Local community leaders including mayors of communities in the agroindustrial heartland of Viru were also present at the inauguration. The School is dedicated to Irene Salvador and Valentina Chafloque, two women farmworkers who were killed in the historic struggle for an eight-hour working day in 1916.

With the help of university students, a technical platform for delivering training is being set up and will start functioning shortly. It will resemble a TV channel and be accessible to all. 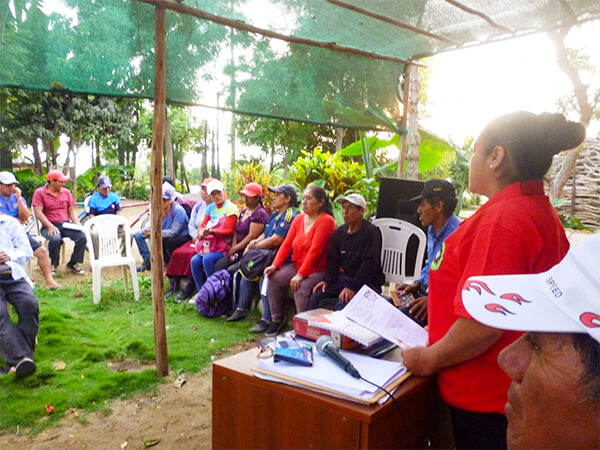