The “Piñera” Controversy: Is Their Produce As Sweet As It Seems?

NATIONAL AUTHORITIES TURN A BLIND EYE TO THE SITUATION, WHAT ARE THE GROUNDS FOR THIS COMPLICITY?

The year 2019 came to an end, with the government and judicial decisions not precisely favoring the conservation of the nation’s precious environment. Specifically referring to the “Piñeras” (pineapple plantations) issue, a lot of environmental organizations and citizen awareness groups during this past year carried out debates, mobilizations, and demands to competent authorities due to the destructive activities, which they consider damage gravely the future of Costa Rica.

In recent days, The Costa Rica News (TCRN) learned about the environmental license given to the “Piñera Del Sur” (PINDECO, private agroindustrial conglomerate), an action carried out by the National Environmental Technical Secretariat (SETENA).

Due to this situation, The Ecological Federation (FECON) clarifies the following:

Have there been protective measures taken towards these lands consistent with environmental laws that SETENA as the legal authority should enforce?

SETENA ignored the 80 hectares of wetland and 64 hectares of existing forests in the projects area (Finca Victoria, Osa), allowing to cut down trees and intervening in the native forest which could only be given under the Declaration of National Convenience.

According to FECON, SETENA officials have argued that there are no situations that contrast with the regulations that warrant the cancellation of the license, but this is false and for proof of this there are the 80 hectares of wetlands and about 64 hectares of forest within the property owned by PINDECO, clearly identified by the National System of Conservation Areas (SINAC), in the report SINAC-ACOSA-HNTS-134-2017.

They claim to cut down 64 hectares of forest, according to national regulations, requires a management plan and a possible decree of national convenience. But contrary to this, it was provided that it was appropriate to proceed with the deforestation, being contrary to rule 19 of the National Forestry Law, which obliges not to change the use of forest land on private property. Any exemption of the rule requires an environmental impact study and a thorough environmental management plan, none of which was presented.

Also, SETENA decided to ignore a warning given by the SINAC (National Conservation Areas System), which states that the sowing of pineapple in the Victoria Estate would cause that “… any type of contaminant that enters the main drainage system, which for this project is formed by the Culebra River, will reach the National Wetland Térraba Sierpe through the Estero Azul ”.

Given all this, the Ombudsman’s Office of Costa Rica called on the Minister of Environment and Energy, Carlos Manuel Rodríguez, to directly assume the responsibility for the eventual authorization pineapple cultivation project installation in Palmar Sur, which, as mentioned above, would affect the wetland Terraba-Sierpe.

The Ombudsman reminded the senior official about the final conclusive report in which the effects of agrochemicals on the environment, a product of the pineapple activity in Buenos Aires (CR), was analyzed. Therefore, “it is essential that activities that affect the health of the population, the natural heritage of the State and the cultural heritage of the country are not allowed”.

It should be noted that not only social organizations have expressed their dissatisfaction with the for-profit impulse to carry out the pineapple project of the pineapple, but also many organized active-citizens groups. We hope that it will finally become aware to all, that this problem has been dragging on for several years and it is not yet seen any solution or agreements that guarantee stability to the ecological balance of this precious land.

This article has been reproduced from: https://thecostaricanews.com/the-pinera-controversy-is-their-produce-as-sweet-as-it-seems/ 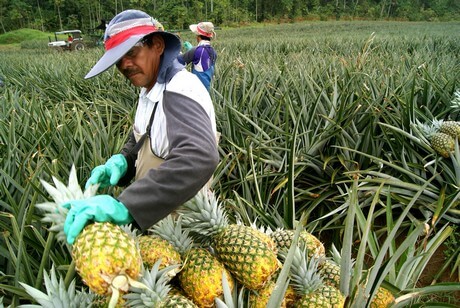