Lidl has over 10,000 stores in Europe and the US, with over 3000 of them in Germany and around 100 in Switzerland. By comparison, they have around 700 stores in the UK, where their current policy is to sell a mix of Fairtrade and Rainforest Alliance certified bananas. The Co-op, Sainsbury’s and Waitrose are the only UK supermarket chains that currently sell only Fairtrade or organic bananas.

The Europe-wide Make Fruit Fair campaign, in which Banana Link is a leading partner, had, in 2016, called upon Lidl to ensure fair salaries, health protection and respect of trade-union rights on its suppliers’ plantations. 75,000 EU citizens signed a petition in support of this call.

“Lidl’s 100% commitment to Fairtrade bananas in Germany and Switzerland is a fantastic step towards better livelihoods for thousands of farmers and workers, and a great response to the 75,000 consumers who called on Lidl to ‘Play Fair’ as part of our Make Fruit Fair campaign. We are keen now for Lidl to now become the fourth supermarket in the UK to offer only Fairtrade bananas in its stores!”

And in another welcome move, Lidl in Ireland announced recently that they are to remove the plastic packaging on the 2.5 million Fairtrade Organic bananas they source from the Dominican Republic.  Plastic packaging will be replaced with biodegradable banding, with a natural adhesive, completely eliminates plastic and holds the product in bunches. This follows a similar initiative announced recently by the Iceland supermarket chain in the UK. 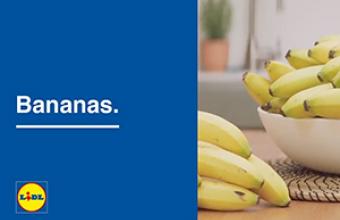