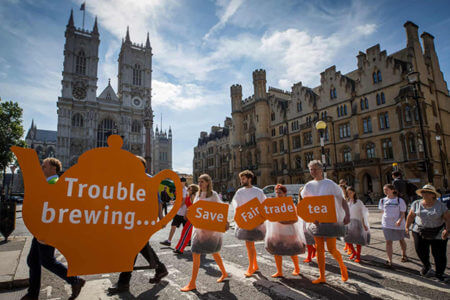 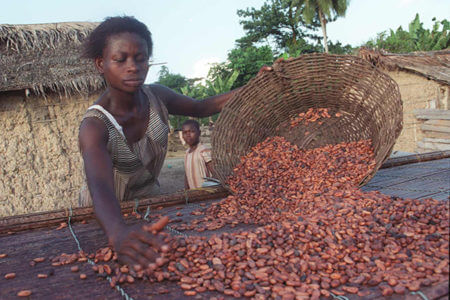 Fairtrade insists that producers make these investment decisions democratically, which means that farmers have to organise into collectives such as Sireet. There is an undeniable power in Fairtrade bringing these collectives to the negotiating table, said Pauline Tiffen, the editor of the Journal of Fair Trade. “The tea industry used to be so hierarchical until quite recently that it was like something out of Dickens,” she said. “And cocoa still felt like it was operating in the 18th century. Until 20 years ago, if you went to any big trade meetings on cocoa, you’d see no women, no people of colour.”
The debate over whether Fairtrade’s systems truly transform the lives of farmers has raged for nearly all of Fairtrade’s lifetime. Its numbers, in relative terms, are still puny. The 1.66 million farmers in the Fairtrade network form a speck within the 2 billion or so people who make their living from agriculture. The sale value of Fairtrade’s products may add up to $9bn, but the global market for coffee alone is worth $200bn.
A more dramatic sign of Fairtrade’s struggles is that it can’t sell, on its terms, all the volumes of commodities it certifies. In 2016, of all the coffee grown as Fairtrade, only 34% of it could be sold at the minimum price. There were no takers for the rest; farmers had to unload the surplus into the standard “unfair” market, at the lower prices that the market determined. For cocoa, the rate is a bit better, 47%. For tea, it’s much worse, only 4.7 %. There are tonnes of harvest for which Fairtrade fails to find any fair-minded buyers at all.
Even the benefits that Fairtrade promises to deliver to farmers have been called into question. In 2014, Fairtrade entered into a public squabble with a team from Soas University of London, which had examined how well Fairtrade did in shrinking poverty in Ethiopia and Uganda. The study, funded by the British government, found that schoolchildren had worked on Fairtrade-certified farms. The researchers compared wages on Fairtrade-certified tea and coffee estates – always owned by smallholders, in keeping with Fairtrade’s belief in championing the small farmer – with wages on larger, uncertified plantations. Workers on the Fairtrade estates were paid less and often laboured in worse conditions, they concluded. Fairtrade called these “distorted comparisons” and rejected the researchers’ conclusions.
In Kenya, the tea farmers of Sireet have experienced some of the frustrations of Fairtrade, but also the sudden precariousness of life without it. The cooperative came together 14 years ago, when 6,230 farmers raised money to buy nearly 1,000 hectares of land to cultivate their tea. Sireet has been a Fairtrade producer from the very beginning, its chairman, Wilson Tuwei, told me. Sireet’s farmers worked hard to meet Fairtrade’s rules and standards, he said, but even so, the cooperative was never able to sell more than 13% of its harvest at Fairtrade rates.
Even that feels like a bonanza, though, compared to what has happened over the last two years. After Sainsbury’s stopped its purchases, Sireet’s sales of Fairtrade tea plummeted. “Last year, we were at not even 1%,” Tuwei said. Sireet’s careful plans started to go up in smoke. “We’ve stopped most of the projects we were funding with the Fairtrade premium. There were dispensaries. We were paying school fees for some children. There were irrigation projects. They’ve all become white elephants now. It has really affected us.”
The rupture between Sainsbury’s and Fairtrade over tea has become the most prominent case of a large company concluding that Fairtrade wasn’t quite cutting it any more. The details of that rupture convey why Sainsbury’s was dissatisfied with Fairtrade, but also why replacement corporate schemes such as Fairly Traded feel flimsy or stifling to those meant to benefit from them.
Two people who have worked with Sainsbury’s told me that the company had been unhappy with Fairtrade for years. When I spoke to these anonymous sources in April, both sounded exasperated at the way Sainsbury’s had handled its exit, but they made the case that its reasons were sound. “We were paying these premiums, but it wasn’t clear where the money was going. Fairtrade isn’t good at keeping tabs on it,” one of them said. “It wasn’t always going to medicines and schools and things like that, as we found through our own investigations.”
Other Fairtrade partners had raised this as well, she added. “We wanted more data … Instead, there was just a systemic inefficiency.” Sainsbury’s, as a corporation, was constantly pressured to be transparent, she said. “But it turned out that Fairtrade wasn’t quite as transparent. That was frustrating.” The other Sainsbury’s source confirmed this. “If you wanted to find out what a cooperative had done with a whole wad of Fairtrade premiums, or what the impact of that had been over the years, nobody could tell you. Or you’d get some anecdotal stuff.”
A Fairtrade spokesperson told me, in response to these claims, that the organisation wanted farmers to spend their premiums the way they wished, setting their own goals and monitoring their own progress. She added that, since April, Fairtrade has “strengthened the requirements on Fairtrade premium use, management, and reporting, in order to promote best practices and increase transparency”. Now, if a cooperative’s annual premiums exceed $150,000, it must hire an external auditor to inspect the way it accounts for the money. 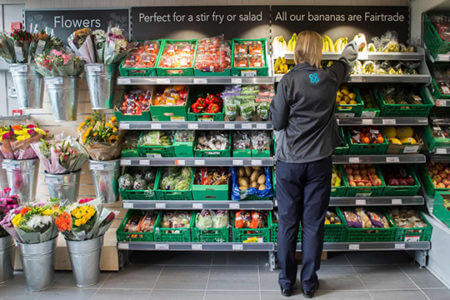 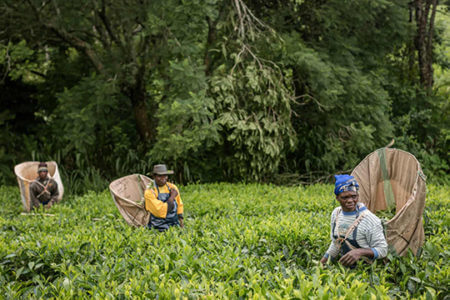 Fairtrade is half-owned by its producer cooperatives, so its standards and metrics are decided in large part by the representatives of farmers. The standards of Cocoa Life, CAFE Practices and other schemes aren’t like that; they are written by the companies themselves, in the companies’ own best interests. No independent third party certifies their success or failure in meeting these standards and publishes those results. Companies reporting on their own sustainability frequently fail “to prioritise planet over profit”, Hans Hoogervorst, who heads the International Accounting Standards Board, said in a speech in April. “Greenwashing is rampant.”
Industries are increasingly left to audit themselves, in part because governments have shredded their budgets in the name of austerity. From Volkswagen to Boeing, we don’t have to look very hard for evidence that companies fib and cheat when they get to mark their own homework. Bringing sustainability certification in-house is unlikely to empower farmers, or to renovate the structure of trade. “But it’s simplistic to say that companies will act in ways that are injurious to farmers,” said Fredrik Galtung of TrueFootprint, the sustainability analysts. In his view, the crises in agriculture are so stark that companies are motivated to protect farms and farm workers – if only to secure their own future profits. But TrueFootprint’s scorecards indicate that most companies only report their spending on sustainability; almost none of them investigate the impact of these schemes on farmers or on natural resources like air and water. Galtung described it as “just being happy to check off boxes”.
Economists like to examine incentives, and to deduce behaviour from them. If the incentives of these companies are misaligned with those of their producers, it’s only a matter of time before they produce conflict and rupture. Companies perceive Fairtrade to be rigid, and say that keeping sustainability programmes in-house gives them “flexibility”. That word is really standing in, though, for “control”: control over how commodities are priced, how to select or discard producers, how farmers farm, even how they live. This may look, for firms and even for consumers, like efficiency, but the effects can be dysfunctional. When four firms – Archer Daniels Midland, Bunge, Cargill and Louis Dreyfus – control between 70% and 90% of the global grain trade, they can bulldoze governments into clearing forested land for crops, crowd out smallholder farmers and push more and more processed grains into our diets. Many of the failings of global agriculture are not the result of multinational companies having too little control; they are the result of companies having too much.
That lesson is available to students of the past as well. After the publication of Max Havelaar shocked the public, in 1901 the Dutch government formulated a new ethical policy – one that would treat Indonesia as a moral responsibility rather than simply as a territory to be exploited. Millions of guilders had flowed from these islands into the Dutch treasury – 187m between 1867 and 1878 alone – and so the government committed to spending 30m guilders over the first decade on the welfare of the Indies’ farmers. Not surprisingly, they received agricultural credit and irrigation canals, because the Dutch corporations were avid for better yields. They also gained more schools and more roads; they were not, however, encouraged to industrialise, because this would have inflated the cost of local labour and led to competition with Dutch businesses.
The Dutch ethical policy came undone as soon as the colonist’s aims started to clash with those of the colony. The harvests improved, but not enough to warrant the investment. The Great Depression set in, and the government thinned down its expenditures even as Indonesian farmers slid into debt. Educating the populace began to seem like a mistake; there was no work for young Indonesian men who had attended university, and they inevitably drifted into the nationalist movement. By 1940, the government had ceased to fund the welfare projects.
An unnamed administrator, who had once supported the ethical policy, watched with disappointment as the meagre progress unravelled and said: “As soon as we withdraw our hands, everything sinks back into the marsh.” But what the Dutch didn’t recognise was that they were the ones who made it impossible for the Indonesians to rise from the marsh in the first place. 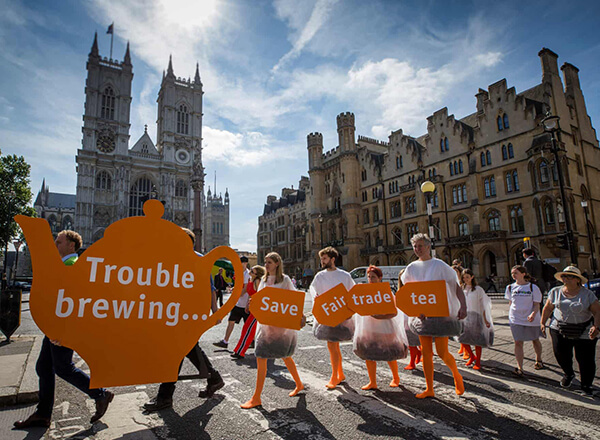