The Fairtrade Base Wage for banana plantations came into effect on 1 July 2021, meaning wage increases of up to 15 percent for banana workers and a significant step towards creating a living wage for thousands of banana plantation workers worldwide.

The Fairtrade Base Wage is set at 70 percent of the take-home pay needed for a living wage, as established by the independent Global Living Wage Coalition. Fairtrade is the only certification scheme to put such a floor wage in place and make a concrete step towards a living wage – that is, a wage that provides workers enough for food, healthcare, schooling and other essentials for themselves and their families, plus a little extra to put aside.

Every Fairtrade banana plantation worker will now get at least the base wage, even if the legal minimum wage is lower. In origins where workers currently earn less than the Fairtrade Base Wage, such as West Africa and the Dominican Republic, wages are estimated to increase by up to 15 percent. More than 12,000 workers are set to benefit – that is around half of the total number of workers on Fairtrade certified banana plantations worldwide. In countries where workers already receive more, their wages can’t be lowered.

“Fairtrade has realised that the minimum wage which we workers currently receive is not enough to cover the basic family needs and, thanks to this new fairer wage, we and our families will be able to feed ourselves better and we migrants will be able to send some resources to our families in Haiti,” said Minel Bellamy, a banana worker and Chair of the Fairtrade Worker Network in the Dominican Republic.

Fellow leader of the worker network, María Jorge, added: “This base wage proposed by Fairtrade means for us more access to health, education, self-improvement, happiness and motivation to continue working. With perseverance, hard work and a living wage, anything can be achieved.“

The new base wage is part of Fairtrade’s strategy to achieve living wages for banana plantation workers. After applying the Fairtrade Base Wage, employers must agree on steps and timelines with trade unions or other elected worker representatives to bridge any remaining gap. In the meantime, up to 50 percent of the Fairtrade Premium can be paid out in cash to supplement worker’s incomes until they reach a negotiated living wage. This fixed Premium, unique to Fairtrade, is paid by buyers on top of the Fairtrade Minimum Price and set at $1 US per box of bananas sold. Workers on banana plantations received more than €14.8 million in Fairtrade Premium money in 2019.

At the same time, Fairtrade is continuing its work to strengthen industrial relations and the ability of workers to unionize, to ensure a sustainable living wage rooted in collective bargaining.

Fairtrade is also introducing a new Living Wage Differential, which is an additional voluntary payment per box of bananas sold, as a contribution towards a full living wage. Fairtrade is able to calculate the living wage differential for each Fairtrade certified banana plantation a company purchases from, and the corresponding differential to be paid, in proportion to the company’s Fairtrade sourcing commitment. Fairtrade will ensure contracts are put in place, and offer monitoring and evaluation services to measure impact. All payments will be verified by Fairtrade’s independent certifier, FLOCERT.

In addition, tailored programmes addressing the specific root causes of low wages and challenges per origin will allow businesses to partner with Fairtrade to address key issues such as gender pay gaps and productivity.

“Workers in low-income countries are amongst the hardest hit by the global pandemic and its economic fallout, struggling more than ever to make ends meet. The Fairtrade Base Wage means better wages for banana workers and a safety net in uncertain times,” explained Nicolas Léger, Fairtrade’s global lead for bananas.

“But with banana prices at rock bottom and export costs soaring, we also need everyone in the supply chain to play their part to make a living wage a reality for all banana workers,” Léger continued. “Our unique data capabilities mean we can show businesses what is still needed to bridge the living wage gaps in their supply chains and we encourage more of them to work with us to achieve decent work and living wages for all“. 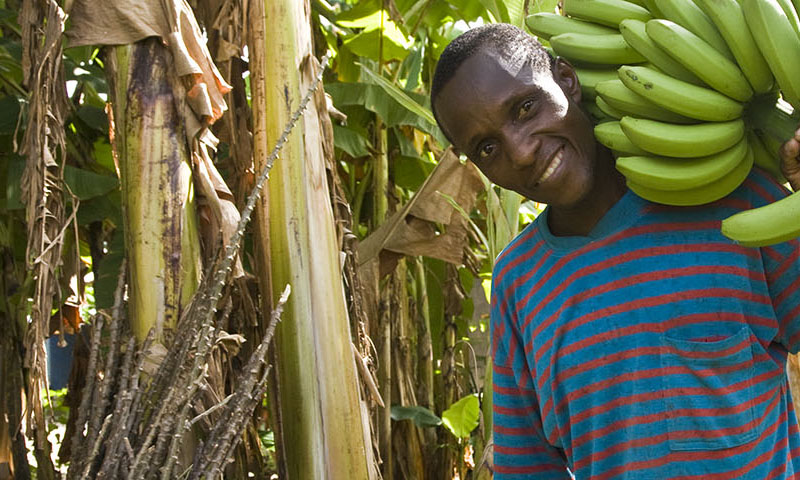