On 11th March, the European Parliament voted in favour of European legislation on corporate due diligence. The European Commission is now due to publish a draft directive in June.

Civil society organisations have been pushing for such legislation for several years and welcome many of the recommendations in the European Parliament (EP)’s report, although they remain vigilant as to the content of such a directive which will come under pressure from some business sectors.

The legislation will bring together legal measures specifying the responsibility of companies along their international supply chains in both the sphere of human and worker’ rights, as well as in relation to the environment.

The broad support (504 votes for, 79 against and 112 abstentions) is testimony to the advocacy work of trade unions, NGOs and small business organisations.

The EP recommends that European companies be held legally responsible for violations that result directly or indirectly from their trading relationships. Companies would be required to map all their commercial activity, including that of their subsidiaries and their sub-contracted activities and demonstrate publicly that they have taken all possible measures to avoid or remediate violations. The text also calls on EU member states to ensure they have civil liability regimes that enshrine a legal responsibility to compensate for prejudices caused in their supply chains.

A coalition of French organisations , with the hindsight of pioneering French legislation in this area, warn that the European Commission needs to make sure that the directive contains certain key elements in order to be effective:

“The EP report tends to reduce due diligence to the adoption of procedures, whereas it should above all be about putting in place effective preventative measures. We also regret the absence of a framework of penal responsibility and insist on the need to improve the access to justice for people and communities affected.“

“There is still room for the Commission to build on this report in the upcoming legislation. Civil society organisations are asking for the legislation to mandatorily apply to all businesses; as well as a stronger and harmonised due diligence obligation covering the entire value chain. The due diligence definition should build on the internationally recognised instruments, namely the UN Guiding Principles & Business & Human Rights and OECD Guidelines.

The definition given to human rights, environment and good governance must be clarified to cover the widest range of impacts across the entire value chain and match the objectives enshrined in the EU Treaties with respect to those matters.“

Various legal actions are being taken under the existing French due diligence law. The most recent case was lodged in early March against the Casino supermarket group by NGOs and indigenous people’s groups from Brazil and Colombia.

The text of the European Parliament legislative report on “Due Diligence & Corporate Accountability” can be downloaded here.

Photo: Friends of the Earth, France 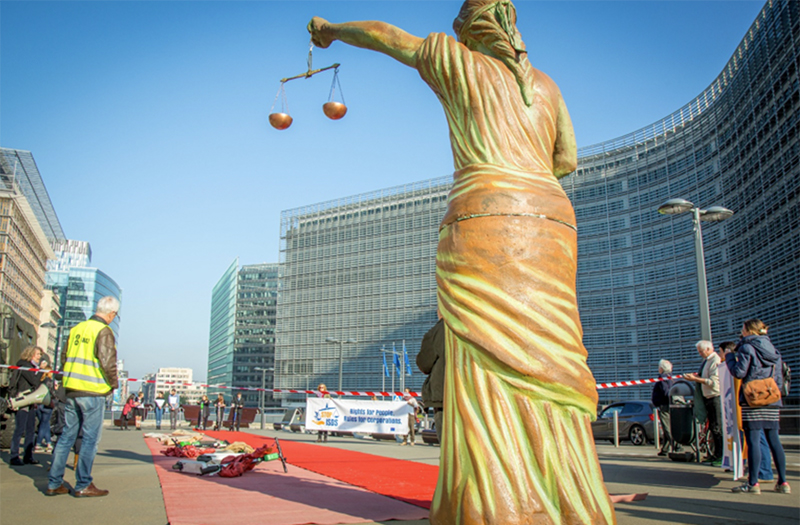