Hurricanes Eta and Iota late last year impacted 90 percent of the agricultural sector in Honduras according to a Damage Report from the Economic Commission for Latin America (ECLAC). This includes the loss of 27% of banana production in the country, representing around £14 million in losses.

As a result, the banana producing country actually began to import bananas from Costa Rica, Guatemala and Panama as of November last year to meet local demand.

“The bananas that were lost cannot be stopped, the little that remained is incipient for national demand, that is why we are getting bananas from Costa Rica, Guatemala and Panama,” said producers’ representative Héctor Castro, adding that, “the worst thing is that more than 4,000 employees are suspended. This is historic, I would say it is the first time” that Honduras has been forced to import bananas due to factors related to climate change“.

It is estimated that the sector could take more than nine months to recover and supply both internal demand and exports that represent the third largest source of foreign exchange income for the country, after coffee and palm oil.

The regional Coordinating Body of Latin American Banana and Agro-industrial Unions (COLSIBA) has expressed its concern given that banana production is the main source of income for many people, threatening the livelihood of many communities in the country.

As COLSIBA have pointed out, the USA is the main market for Honduran bananas, where 98.8% of total exports were sent between January and November 2020. Total agricultural exports totalling US$793.6 million in the period, an increase of US$70.6 million (9.8%) on the same period in 2019, which was largely due increased prices for Honduran bananas, despite a 5.1 percent drop in the expert volume.

Banana Link has helped to provide donations from partners at the GMB, Fairtrade International and our own contribution to workers in Guatemala and Honduras, which have enabled their trade unions to distribute basic food packages, with enough rice, beans, oil and other necessities to support a family for a month. Many are relying on this support, and that of other charitable and religious institutions, to survive, while they wait to find out if they can return to their homes and jobs, or not. 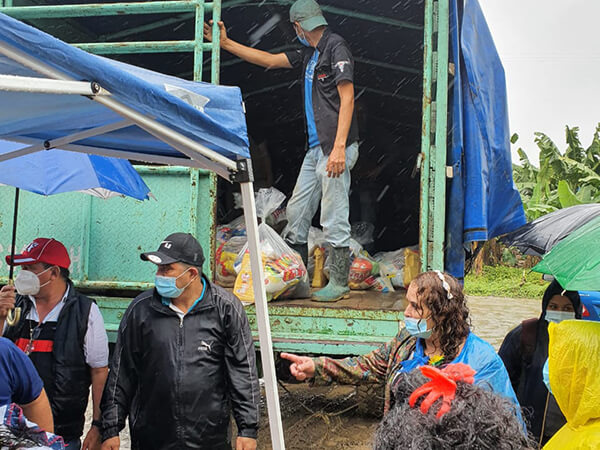