TR4 fusarium wilt is threatening to devastate banana plantations worldwide. It recently reached Latin America, which produces 80% of the dessert bananas exported worldwide. The disease, which is also called Panama disease (Tropical Race 4), is incurable and spreads rapidly, and Cavendish varieties, which account for 100 % of the dessert bananas produced for export, are powerless to resist. In view of the urgency of the situation, CIRAD is launching an initiative, the World Musa Alliance, on 6 February 2020 at the Fruit Logistica trade fair in Berlin. The alliance is intended to associate as many stakeholders as possible, in the hope of rapidly finding solutions to the threats to banana production worldwide .

TR4 fusarium wilt, which arrived in the Americas in 2019, after Southeast Asia and part of the Middle East and East Africa (solely Mozambique), is now threatening banana production on a global scale. It is an incurable disease caused by a soil fungus, and results in substantial yield losses. Cavendish, the varietal group that has dominated the export sector for decades, is particularly vulnerable. In view of the potential economic and social impacts of the disease, CIRAD proposes working on both varietal diversity and the cropping practices required to contain the disease, within a global network, the World Musa Alliance.

The alliance, launched on 6 February 2020 at the Fruit Logistica trade fair, intends to generate the knowledge required to develop new varieties and production systems, and to create new TR4-resistant varieties.

Diversifying the range of varieties and changing cropping practices are the two key messages in the founding document for the alliance, unveiled on 6 February. “And there is no question of choosing between the two: we have to do both at once“, Denis Loeillet, Banana Value Chain Correspondent at CIRAD, insists.

The “all Cavendish ” approach has demonstrated its limitations: the variety currently used worldwide is highly susceptible to TR4 fusarium wilt. To avoid reproducing what happened with Gros Michel, which was the dominant varietal group until it fell victim to Fusarium Race 1 in the 1960s, CIRAD recommends introducing genetic diversity in the export sector.

However, banana genetic improvement, which is highly complex, will not be enough to safeguard the value chain. Controlling TR4 fusarium wilt also means developing appropriate cropping systems. Lastly, it also provides an opportunity of revisiting production systems in the aim of boosting their biodiversity and cutting pesticide use

Federating as many stakeholders as possible

CIRAD is keen for the alliance to federate a broad range of stakeholders from every part of the value chain, since this will make it stronger. It will be founded on close coordination between the whole range of key players in the chain (producers, commercial operators, trade associations) and research centres. The founding document also suggests that it works to produce common goods, accessible to all. In the coming months, the founder members of the alliance will be establishing its operating principles and governance and funding models.

The global banana market is under threat from TR4 fusarium wilt

Banana and plantain production worldwide totals 137 million tonnes, of which 70% are dessert bananas and 30% cooking bananas. The entire global dessert banana market (more than 20 million tonnes) centres on the Cavendish varietal group, which accounts for more than half the bananas produced worldwide. It is the world’s most widely traded fruit. In tropical and subtropical regions, local markets are primarily supplied by family farms. Bananas are major sources of nutrients, and provide rural people with an income. On reaching South America in 2019, TR4 fusarium wilt launched an attack on the world’s largest export banana production zone (80%), threatening the collapse of the value chain. The problem is that the most widely grown varieties all belong to the same group, Cavendish, which is highly susceptible to the disease. The subsequent drop in production will obviously affect import markets, but also local markets and hundreds of thousands of producers and agricultural workers. 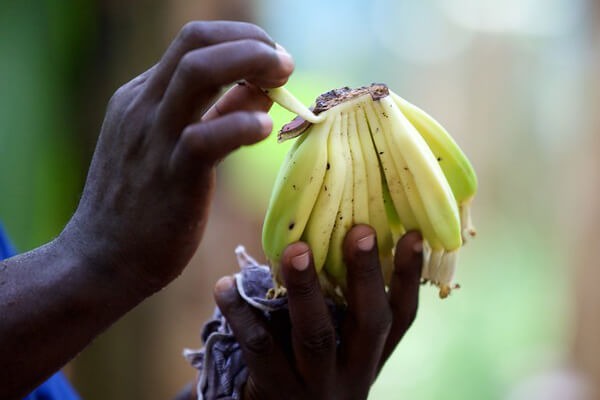