This is the second blog in as series that shares key highlights and learnings from the Ethical Trading Initiative programme ‘Gender Equity Across Supply Chains: a comparative analysis’ initiated by Women Working Worldwide and Banana Link in 2018, and joined a year later by Homeworkers Worldwide.

Major growers and exporters of flowers to the UK and other international markets, VP Group and Flamingo, have established a wide range of gender projects in their farms throughout Naivasha. During our visit we visited external and internal projects, interviewed managers and engaged with workers who had benefitted from these projects. Many of the projects were replicated across farms; we have chosen a few to showcase good practice.

Information on everything from company vision to maternity rights and policies were clearly displayed on notice boards in all the farms, especially where workers congregate, such as canteens and locker rooms. Workers were able to inform themselves about their rights without having to engage with management and there were publicly available lists of union representatives and committee members should workers need to escalate an issue.

Information was also provided on benefits that could improve workers lives, such as subsidised ‘jiko’s’, wood burning stoves. The stoves not only reduce the amount of fuel required for cooking but also create a cleaner cooking environment, resulting in a reduction in the time women and girls spend collecting wood, a reduction in cost (if the wood/charcoal is purchased) and a reduction in air pollution.

Top tip five: Ensure that all policies and useful information are shared with workers and displayed in visible and accessible locations. Where possible information should be available in local languages, as well as English.

Examples of how the companies supported both women and men to progress and develop their skills were evident across all farms. Of particular note was the story of Hellen, who had worked her way up from a general worker to become a secretary in human resources. She had also undergone the ‘Leadership for Hope’ training, delivered by Emerging Leaders, which focused on building leadership skills and self-esteem.

Hellen learnt about business and financial planning, which enabled her to set up a successful business with her husband, a tailor, making and selling bags in the local market. The training also boosted her confidence and supporting her progress within the company. Hellen is able to contribute more both in her role at the company and as a member of the community, strengthening her financial security and providing a successful role model for other women, both in and outside of work. 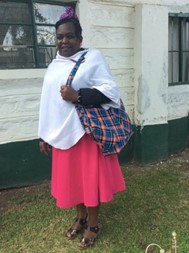 Hellen stands outside with one of her bags.

Top tip six: Invest in leadership and financial planning for your workers, especially women, and the positive benefits will be felt individually, in the family and in the workplace. 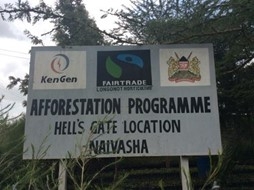 Examples we were shown included: a posho mill set up to produce flour to sell at a subsidised price to workers; an afforestation programme at Hell’s Gate Nature Reserve; various primary schools supported with classrooms and resources, including food; and support for local safe houses for orphaned or vulnerable children. 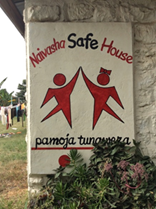 Perhaps the most impactful of these was the pooling of a number of Fairtrade Premiums from various farms to co-fund the Naivasha Maternity Unit, which has saved the lives of thousands of mothers and babies. 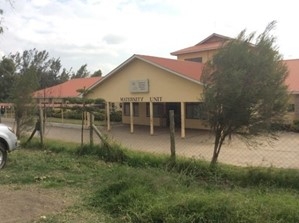 Top tip seven: Ensure all suppliers have required certifications for fairer trade and where possible purchase and support Fairtrade certified farms and goods.

We know that ensuring there is enough food on the table for you and your family is difficult when jobs are poorly paid or insecure. One of the ways farms in Naivasha were trying to support workers was to provide a nutritional lunch, which was either free or heavily subsidised. Vegetables used for staff lunches were sourced from local farms or grown by the flower farms in nutritional gardens on site. These nutritional gardens were also able to provide opportunities for agricultural training in schools and colleges, and sell surplus produce and tree saplings to the local community. 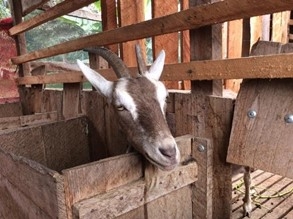 A goat sits in the stable of a Fairtrade nutritional garden.

Fairtrade farm showed us around their nutritional garden, which not only had examples of drought tolerant species, beehives, compost heaps, rainwater harvesting and different types of irrigation, but also incorporated livestock and provided members of the community with livestock welfare training too. 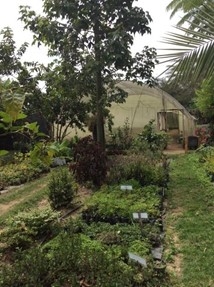 An example of a Fairtrade nutritional garden.

Another Naivasha farm has adopted the use of donkeys to transport various goods around the farm. They found that this increased job opportunities, particularly for women, as donkey handlers and cart drivers, with a number of added benefits. The first donkeys were rescues who then reproduced. As this continued the farm ended up with so many donkeys, they were able to offer them to the local community.

Those families awarded donkeys were given training on donkey care and welfare. Once trained the donkeys could be relied upon to transport goods and carry water and firewood throughout the villages. 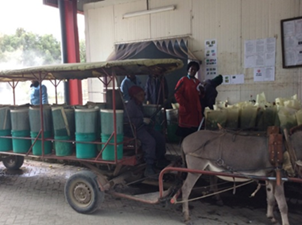 By innovating a single project, the farm was able to facilitate increased job opportunities for women, grow the communities knowledge on animal care, reduce the use of motorised vehicles on the farm and its overall carbon footprint, and give support to local communities – especially women and girls – who no longer had to collect water and firewood by foot.

Top tip nine: Be creative and innovative. Thinking outside the box can have wide ranging and beneficial impacts for company, workers and the wider community.

Back in the UK we began to ‘knit’ some of the good practice ideas we had come across into our gender work, whilst gathering other case studies in bananas, tea and flowers. We set up a cross functional working group to shape these stories, ‘top tips’ and other learned experiences into a framework of key drivers of change that companies, NGOs and trade unions, could use to start or enhance their gender journeys.

Top tip ten: Reviewing your operations and supply chains with a gender lens can seem an overwhelming and complex challenge. Make it easier by breaking it down into accessible steps using our framework.

In the next blogs we will share the original drivers framework and dive even deeper into some of the ways these projects, and other programmes in agriculture and garments, are helping to make equality a reality.